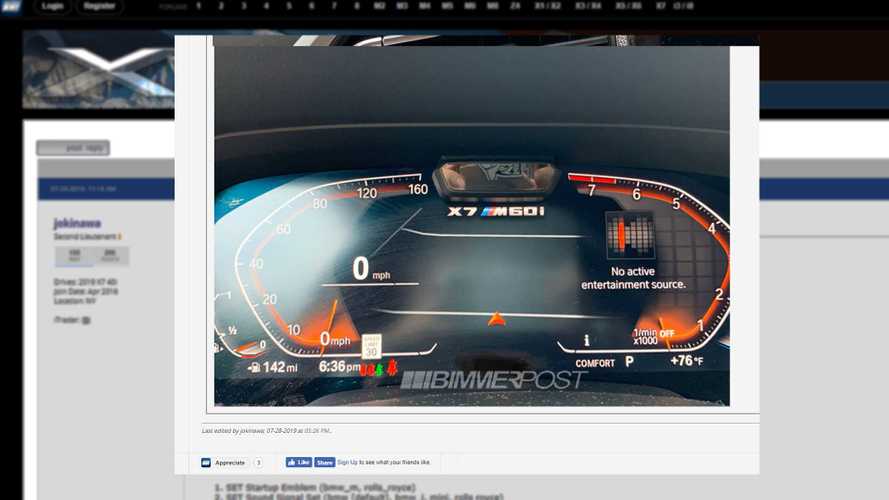 An X7 owner found it while tweaking the SUV's computer code.

Even before BMW officially unveiled its big X7 SUV, people were talking about a possible high-performance V12 variant not unlike what you find in the 7 Series sedan. Not that the X7 is slow in standard guise – in xDrive50i trim its 4.4-liter twin-turbo V8 develops 445 horsepower (332 kilowatts), which is enough to send the big people mover to 60 mph in 5.2 seconds. If that’s not enough, the M50i pushes the V8 even further with 523 hp (390 kW) and a 0-60 time of just 4.1 seconds. If that’s not enough, well, a V12-powered X7 could be in the cards after all.

A tech-savvy X7 owner and bimmerpost.com member named jokinawa did some virtual digging in the SUV’s computer brain and found an X7 M60i logo (pictured at the top of the page) that displays on the digital speedometer. An X7 40i is listed in jokinawa’s forum profile as the vehicle owned, so it’s safe to say this M60i logo isn’t something you find while browsing the SUV’s various systems the normal way. Indeed, the forum thread is filled with various coding endeavors to tweak and otherwise modify the X7’s tech systems. Truth be told, the M60i logo is glossed over in that discussion with barely a mention, but it most definitely has our attention.

That’s because BMW hasn’t officially acknowledged such a vehicle exists, or for that matter, will ever exist. Clearly it’s on somebody’s mind in Munich, and the fact that it’s already in software for the X7 suggests an M60i is imminent. As for whether it will pack a V12, the M760i dishes up the big twelve-lunger for the 7 Series, so there’s certainly symmetry in having the same 6.6-liter mill in an X7 M60i xDrive. For the record, that engine produces 601 hp (448 kW) and can shove the big sedan to 60 mph in 3.9 seconds.

This isn’t the first time we’ve seen a potential new model from an automaker leaked inside its software suite. And with increasingly complex computer systems infused into modern luxury automobiles, it probably won’t be the last.