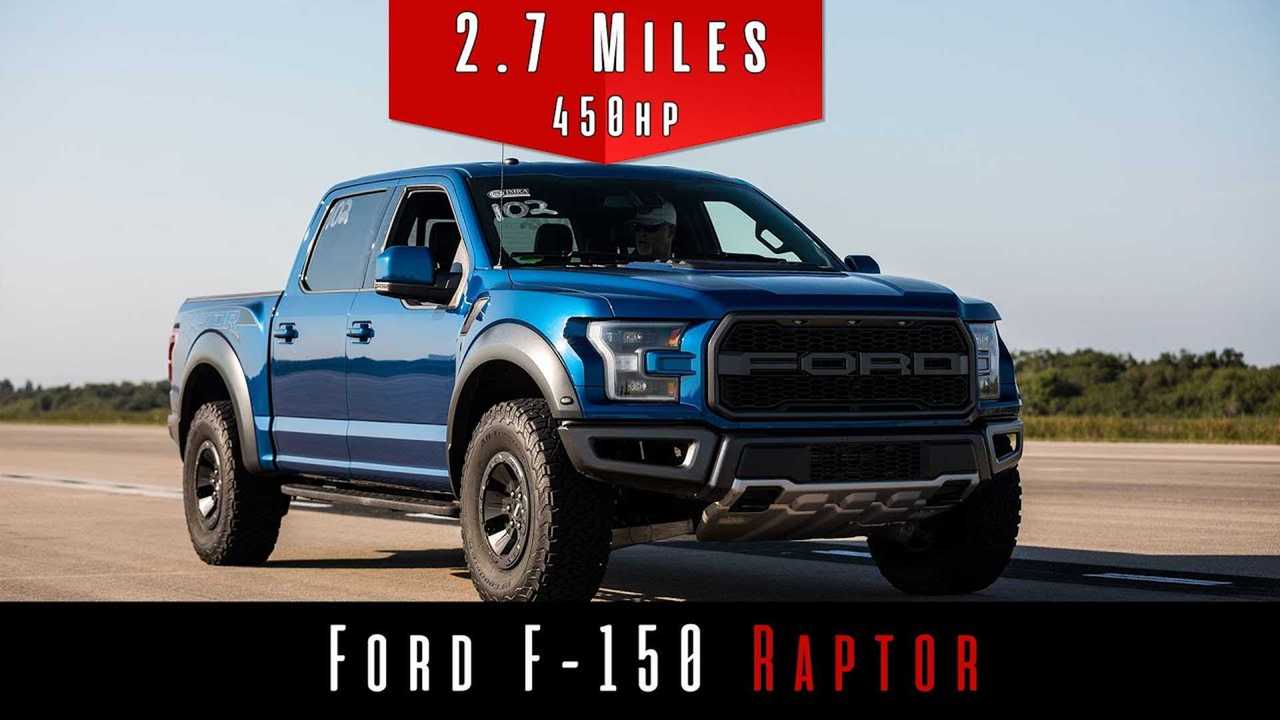 The Ford F-150 Raptor gets a lot of love from pickup fans for its combination of utility and performance. Now, the Johnny Bohmer Proving Grounds highlights the muscle truck's speed by unleashing one on the 2.7-mile-long runway.

This Raptor is completely stock with a 3.5-liter twin-turbo V6 making 450 horsepower (336 kilowatts) and 510 pound-feet (692 Newton-meters) of torque while running through a 10-speed automatic. As a top speed run, the driver here doesn't put much of an emphasis on acceleration, and the truck takes over 10 seconds to reach 60 miles per hour (96 kilometers per hour). At a little over a minute into this clip, the truck reaches its factory-limited top speed of 107 mph (172 kph). According to the proving grounds' equipment, the actual maximum velocity was 107.284 mph (172.656 kph).

If you want to see how fast a Raptor can go without the speed limiter in place, check out the video above from the Johnny Bohmer Proving Grounds. While the distance in this clip is only 2.3 miles, rather than 2.7 miles, the truck is still able to go quite a bit faster than the stock example.

While mechanically similar to the 2018 model year, the 2019 Raptor has a few special goodies to keep it fresh. For example, the new Trail Control feature is essentially cruise control for off-roading that allows a driver to focus on the steering. There are also adaptive dampers that can even detect if the pickup is in the air and allow for a smoother landing. On the inside, there are new power-adjustable seats with heating and ventilation for a comfier experience even when occupants are having fun off-road.

2019 Ford F-150 Raptor Top Speed
The Johnny Bohmer Proving Grounds (JBPG) runway, located in Merritt Island FL. is not only the widest and flattest runway in the world but also close to the longest. For over 10 years, Johnny Bohmer has been performing Straight Line Aerodynamic Testing for many manufacturers and thousands of vehicles here. The all concrete runway is 3 miles long with an additional 1000 ft. asphalt runoff on each end. The runway is also 100 yds. wide with an additional 50ft wide traffic lane on each side and has an elevation variance of only 1⁄4 in. from north to south over the 3 miles making this one of the flattest, large surface concrete platforms in the world. You hardly notice the 24 in. crown in the center of the runway due to the immense width of the surface. In todays’ time, the availability of concrete would make this runway impossible to build. The traction is also substantially better here than any street surface; not as good as a drag strip, but much better than the street.

Johnny Bohmer has developed a program to debunk myths and fact check the manufacturer’s claims of vehicles performance. While testing the vehicles, Johnny’s team will data log each vehicle and record the findings. These have been useful to many manufacturers because of the vehicles ability to drive at speed for 2.5 miles while still have a safe, shut down area. Performance videos will be posted to the public on the recently started, Johnny Bohmer Proving Grounds YouTube channel.

The vehicles being tested are timed and speed checked with Garmin and GoPro interior monitoring systems. External timing and speed are performed by the International Mile Racing Association (IMRA) who is a sanctioning body accepted by numerous auto groups and the Guinness Book of World Records. Johnny and his team will routinely test 1⁄2 mile, 1 mile, 1.5 mile, 2 mile, 2.3 mile, 2.5 mile and 2.7 mile distances. Manufacturers come from all over the world to test many types of vehicles at JBPG including sports cars, race cars, tractor trailers, electric vehicles, autonomous vehicles, fire safety, law enforcement and the list goes on.

On May 4, 2019, Johnny Bohmer had a small group of vehicles testing at JBPG; ranging from the McLaren Senna and 720S to the Ford Raptor and Ferrari 599. The weather conditions that day are listed below.

One of the main functions of the Johnny Bohmer Proving Grounds is to safely determine all aspects of a vehicle’s performance capabilities while determining the accuracy of the manufacturer’s claims.

Last but not least, please subscribe to the Johnny Bohmer Proving Grounds YouTube channel as we continue to perform more testing with some of your favorite vehicles.