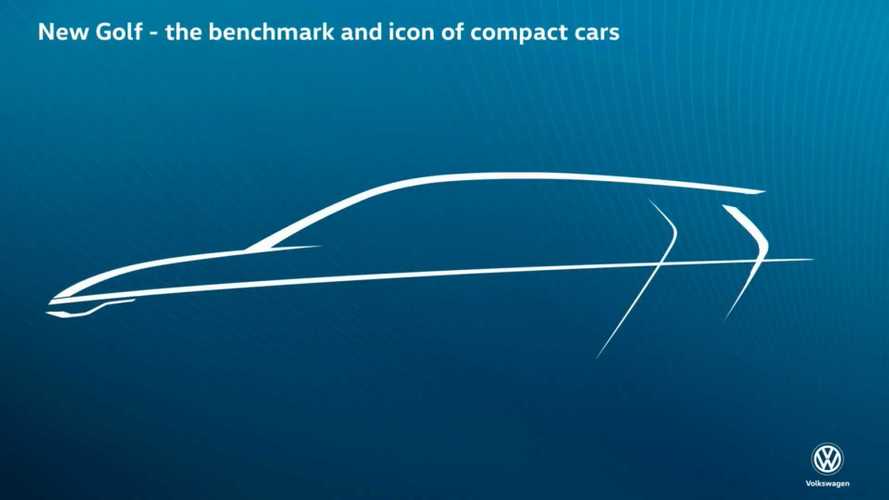 Coming next year when Volkswagen will also launch a new Passat in Europe and the U.S.

VW held a Golf 8 Supplier Summit at the beginning of the year when it published a rather vague design sketch depicting a short three-door silhouette of the new Golf. For the Volkswagen Brand Annual Session organized this week at home in Wolfsburg, a slightly more substantial sketch was presented during the part of the presentation detailing the company’s product roadmap for 2019.

Billed as being “the benchmark and icon of compact cars,” the hugely popular Golf will make the transition to its eighth generation in the second half of the year based on a slideshow of the core brand’s highlights for 2019. We already know production is programmed to kick off in June, but considering the Golf appears on that timeline towards the end of the year, it likely means customer deliveries in Europe won’t begin until the third quarter.

Meanwhile, the beginning of next year will mark the launch of a long-wheelbase derivative of VW’s smallest crossover, the T-Cross, but only in China and Brazil. The model assault in the People’s Republic will then continue with electric versions of the Lavida and Bora sedans, followed by the e-Golf and the Polo.

Now we’re getting to perhaps the most interesting part of the timeline since the second half of the year shows a Passat earmarked for Europe and Brazil, plus another Passat for the United States. The former is most likely a facelifted version of the current-generation midsize sedan and wagon – as seen in multiple spy shots already. But why is there a second Passat just for the U.S.? Logic tells us it will be different than the Euro model, so there can only be two options: it’s either a version dedicated to the U.S. market or the car will have many things in common with the Chinese-spec Passat launched a couple of months ago.

The two remaining highlights presented during the Volkswagen Brand Annual Session 2018 were the T-Roc Cabrio due to be launched around the same time as the Golf 8, and the production-ready electric ID hatch scheduled to debut late 2019.

Further down the line, the U.S.market will be getting a midsize five-seater SUV and a compact SUV by 2021. The first one is a five-seat version of the Atlas previewed by Atlas Cross Sport concept and the other one is a global model different than the T-Roc, possibly the Tharu (pictured below) already revealed for China.

If you have an hour and a half to kill, here's the full video from where we grabbed the adjacent screenshots.