Mercedes’ newest coupe is right at home on Maine’s lovely, undulating byways, even if the license plate is not.

Well, this puts me in an awkward position.

For years I’ve been visiting my in-laws in the Great State of Maine, eventually earning enough goodwill to joke along with the family about the profusion (plague really) of tourists. At the trailhead, at the lake, at the corner store – typically driving European brands, with out-of-state plates – the hordes of “summer people” are easy to spot and easier still to make fun of. That thought occurs to me as I see a cool dozen of Mercedes-Benz’ new C300 Coupe lined up on a Portland street, and becomes more uncomfortable as we caravan close to where the parents live.

My Polar White Coupe may wear Michigan tags, but spiritually I’m still a “Masshole” on this trip north – at least when I’m choking traffic at a tiny coffee shop, locals shooting me daggers over fresh blueberry scones. Sorry, Mainers. 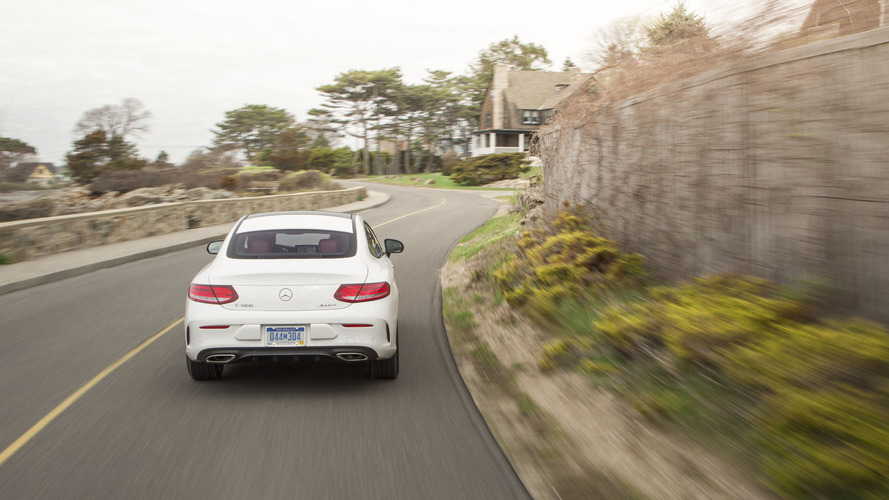 As one Mercedes engineer put it, “The car has a great ass.”

With that apology offered, I must say that the C300 looks damn good in this setting – company event planners were on to something when crafting this junket. Gliding past rambling farmhouses and century-old stone walls, the Mercedes Coupe cuts a rakish silhouette. Cues from the ungodly good-looking S-Class Coupe abound, including sleek, round corners on a front end that has been sculpted far leaner and lower than on the blocky out-going car. From the rear, it’s clear that the Coupe has been doing squats in its transition from the existing sedan form. Flat, edgy surfaces have been made rather round, pert, and sinuous. As one Mercedes engineer put it, “The car has a great ass.”

Inside the story is the same. Trickle-down styling and content is evident from higher-up in the Mercedes range. At least with the $4,800 Premium 2 package, the space is enlivened by an 8.4-inch display screen that is operable via both a central COMAND knob and a touch panel. But the leather-clad doors and instrument panel and excellent, snugly bolstered sports seats do the heavy lifting in terms of communicating the luxury message. There’s less of a lavish feel than is found in the S Coupe, to be sure, but I still feel appropriately spoiled as I glide through Kennebunkport. (I also feel hungry for lobster rolls, but I’m guessing that has more to do with the in-bound smell of french fries than the leather quality.) 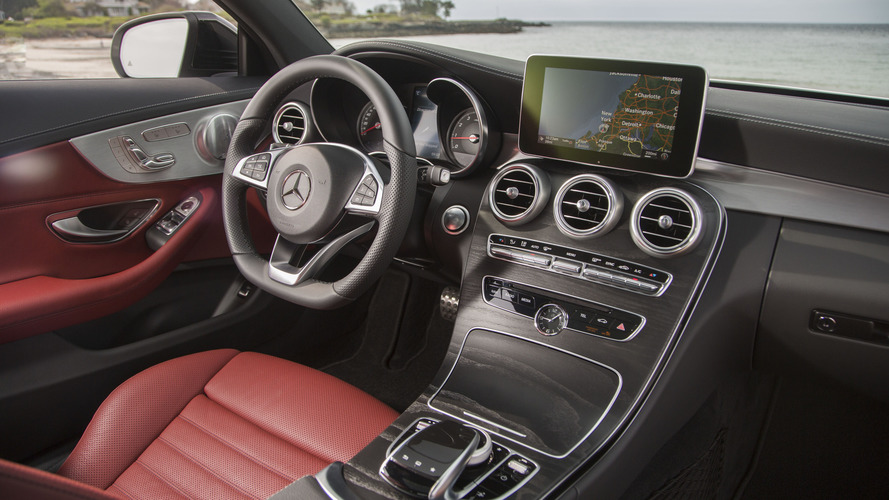 The leather-clad doors and instrument panel and excellent, snugly bolstered sports seats do the heavy lifting in terms of communicating the luxury message.

Despite my outsider-guilt, the C300 really does feel well suited to the winding, sometimes badly surfaced roads that unravel over the region’s White Mountains, and it does so at various levels of pace. My test cars include those with the standard, steel-spring suspension, as well as the optional, multi-mode Airmatic setup, and both are quite competent. Set to Comfort mode, the air suspension is as soft as a Buick LaCrosse – a bit squishy in the corners but very able at soaking up frost heaves and construction ruts at close to full pace. Moved into Sport or Sport+, the suspension stays noticeably stiffer under a lateral G load, though it’s certainly never sharp enough to feel punishing. The harder I drive the Coupe, the more I sense a car with higher limits than most any buyer in this segment will ever need. The sport modes aren’t great if you live on bad roads, unless you’re willing to trade a good deal of ride quality for overall handling response.

It’s fair to mention here that, the difference between the C300 in standard, rear-drive form or with the 4Matic all-wheel-drive system, is slim on dry roads. With a few fast corners in each as data points, I detect a whiff, perhaps, of added corner-exit grip in the 4Matic car, but the real advantage would seem to be for buyers in Snow Belt states. 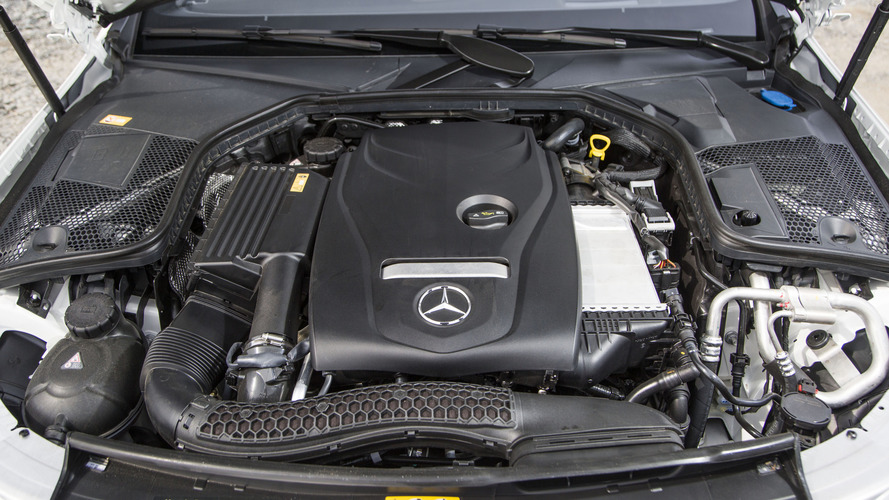 The torque output is actually higher than the outgoing sixer, and it’s available with very little lag from a fast-spinning turbo.

Where the last C-Class Coupe offered four- and six-cylinder engine options, the 2017 car is about to hit dealerships with just one: a turbocharged 2.0-liter four-cylinder developing 241 horsepower and 273 pound-feet of torque. Don’t let lack of choice put you off – this is an excellent motor. The torque output is actually higher than the outgoing sixer, and it’s available with very little lag from a fast-spinning turbo, and across a predictably broad range of engine speed. There’s more than enough energy to move the 3,770-pound (in AWD form) coupe to 60 miles per hour in under six seconds. If that’s not enough punch for you, the company will shortly offer two AMG variants: a C43 and a C63, with performance increasing appropriately as those numbers climb.

The turbo’d C300 engine is still plenty to pull you smartly though the worst Maine traffic – slow moving tractors and logging trucks – from middle revs, in remarkable stillness. I noted a rather deep, growly exhaust note when I really committed to wide-open-throttle, but for the most-part, and for better or worse, Mercedes has made this sporting coupe very quiet. There’s more tire-roar volume off the optional 19-inch AMG wheels than there is clamor from the engine. 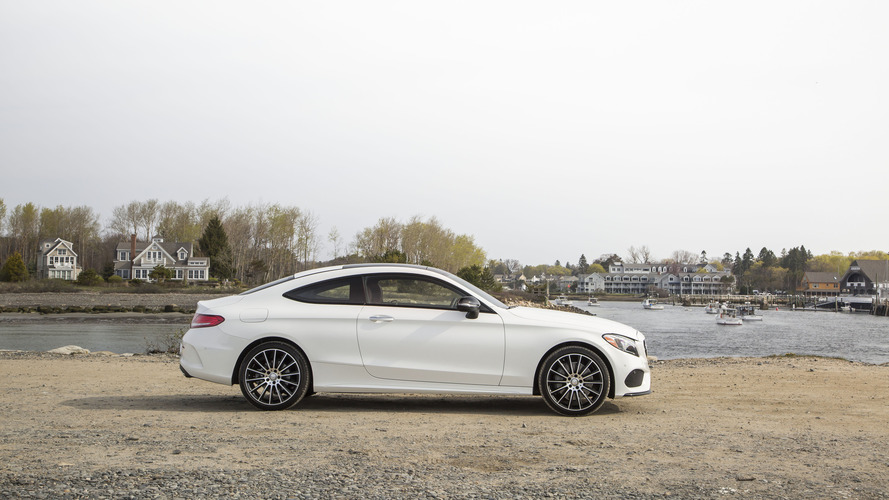 This isn’t really a car type that lives or dies by specs so much as it thrives on curb appeal, and the new Mercedes simply outshines its rivals on looks alone.

That’s probably appropriate for a car that is, frankly, more impressive in terms of show than go, as it were. As I’ve mentioned, the drivetrain and handling capacity come together to reward you when you see the traffic clear on a great road like the Kancamagus Highway, but the C never feels urgent. Never drove me to drive it harder. That’ll be the job of those AMG variants, though, and the laid-back luxury vibe is one the C300 wears quite well.

Audi, BMW, and Lexus all offer coupes in this price and power range that match nicely with the new C300. Certainly all of this coupe segment starts in the early $40K range, and can be had well over $50K. Driven in quick succession, I’d speculate that there might be some white space between the set in terms of performance driving. But this isn’t really a car type that lives or dies by specs so much as it thrives on curb appeal. And be it on the hipster streets of New England’s Portland (I hear there’s a version out west, too), or on the madras-spangled coastal communities, the new Mercedes simply outshines its rivals on looks alone. It probably looks good in states other than Maine, too, but I’d have to leave to find out. Now, who do I see about swapping out these Michigan plates for something in a Vacationland?