Toyota: No Supra In NFS Heat Because It Promotes Illegal Street Racing [UPDATE] 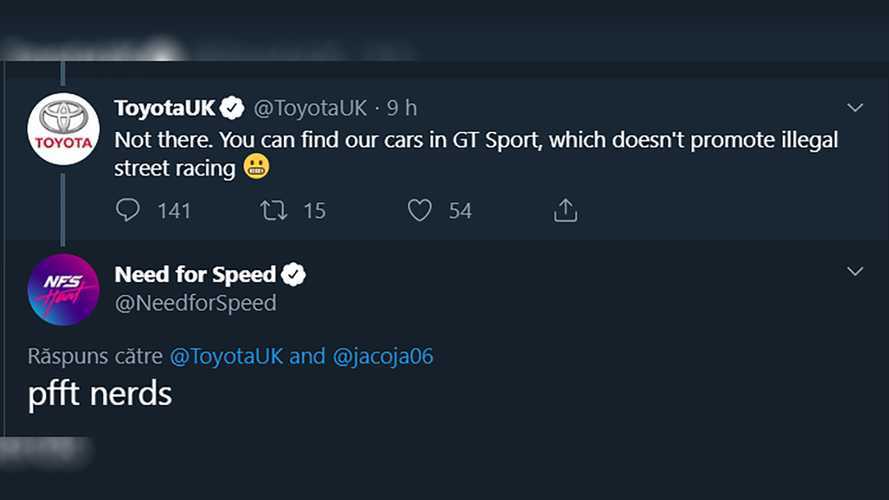 But it will appear in the next Fast and Furious movie.

Update: Toyota UK sent a series of Tweets Wednesday explaining its initial, now-deleted tweet was incorrect as to why Toyota does not license its vehicles to certain video game franchises. According to the tweets, Toyota has no plans to license its models to any other game beside Gran Turismo Sport. A subsequent tweet said, "We'll be really excited to share our future plans with you as soon as we're able to." However, until then, you can race the Toyota Supra in NASCAR Heat 4.

When Need For Speed Heat announced the cars that'd be available in the game one manufacture was missing – Toyota. Dreams of evading police in the new Toyota Supra will remain a fantasy. There will be no Celica, MR2, or Toyota Tercel SR5, which is a shame. But Toyota's absence from certain video game franchises isn't new. Need For Speed Payback lacked Toyota vehicles. One reason could be Need For Speed's penchant for promoting illegal street racing. A tweet from Toyota UK appears to back up the claim by saying, "You can find our cars in GT [Gran Turismo] Sport, which doesn't promote illegal street racing."

The tweet has since been deleted, but it doesn't explain Toyota's absence from other video games. Forza Motorsport 7 featured no road-legal Toyota offering, and it's an analog to the Gran Turismo franchise. And it appears Toyota's avoidance of promoting illegal street racing only applies to video games. Images of the 2020 Supra on the set of Fast And Furious 9 have popped up, which is a movie franchise known for illegal street racing and other unsafe driving antics. We've reached out to Toyota for an answer, and we will update this story accordingly when we hear back.

Video game licensing can be fickle. It's one reason why Porsche vehicles have been absent from certain video game franchises as well. Electronic Arts held exclusive rights for Porsche vehicles in video games for years, meaning other video game developers had to seek approval from EA for permission to use Porsche cars in their own games. Porsche didn't appear in a Gran Turismo game until the latest installment, Gran Turismo Sport, and it's one reason Forza Motorsport and others have used RUF vehicles.

The lack of any Toyota vehicles in Need For Speed Heat or any other video game franchise is a bit disheartening, and a missed opportunity. Video games are one of the first places kids experience cars, and where affinities for certain makes and models begin.