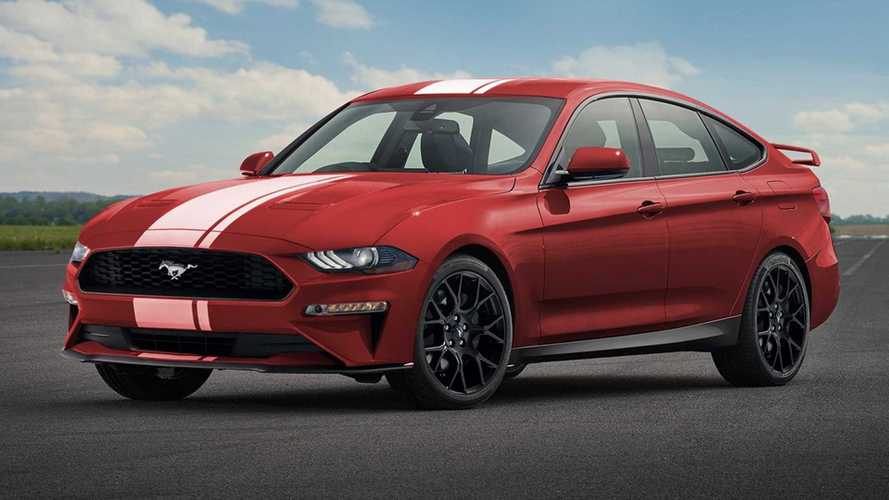 Rumors of a sedan 'Stang have fueled the imagination of one guy who knows his way around Photoshop.

Ford’s car lineup in the United States will be drastically reduced to a single model, the Mustang, after plans to import the rugged Focus Active from China were scrapped due to high tariffs. The silver lining for those not fond of crossovers and SUVs is that a new car with a normal ride height could be in the works at the HQ in Dearborn. Latest intel suggests a four-door Mustang sedan is planned, according to an alleged reveal made by Ford to dealers at a meeting held in October.

Check out these renderings:

This hot gossip has fueled the imagination of Photoshop master Kleber Silva, with the artist deciding to imagine the more practical side of the pony car. Speaking of which, the pony badge at the back suggests we are dealing with the EcoBoost version of the Mustang, but rumors say the sedan will use a big V8 engine like the GT. Curiously, it is believed the engine in question won’t be the familiar naturally aspirated 5.0-liter, but a turbocharged unit. Could Ford decide to give the Coyote forced induction? It’s too early to say.

Not to be confused with the Mustang-esque pure electric SUV previously referred to as Mach 1, the new ‘Stang flavor will logically adopt a longer wheelbase than the two-door coupe and convertible models to offer a roomier interior. The same rumor mill indicates it will feature a sloping roofline to rival the likes of the Audi A7 Sportback and Porsche Panamera, so it will also compete with the Mercedes CLS and the AMG GT 4-Door Coupe.

Some would say such a fancy car should carry the Lincoln badge, but the family-friendly Mustang is expected to stick to the Blue Oval badge despite what will be a starting price well above the $35,355 Ford is asking for a base Mustang GT Fastback.

While the jury is still out on whether there will be a Mustang with rear doors, we do know for a fact a Brian Cranston-approved hybrid version is coming. Of course, the Shelby GT500 is also inching closer.

Looking into the distant future, the next-generation Mustang has reportedly been pushed back by a year, with Automotive News saying it will be ready for a 2021 launch. It will ride on a new modular platform opening up the possibility of an all-wheel-drive layout with a rear-biased setup.