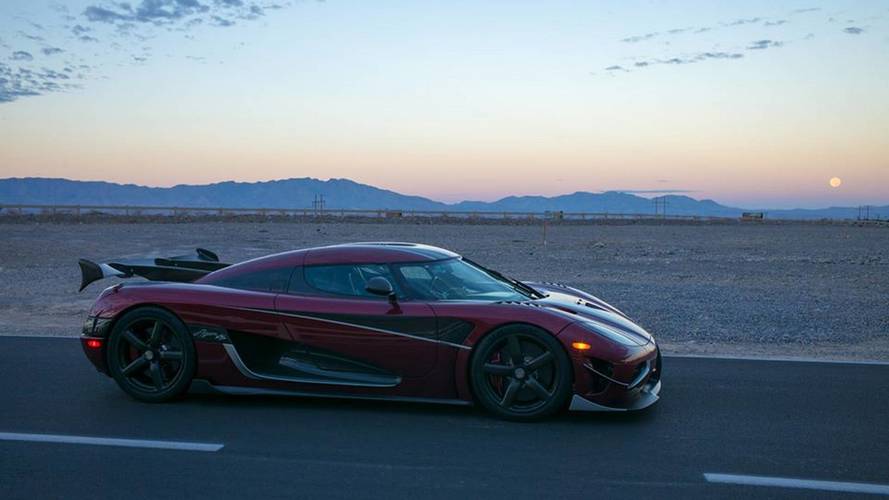 [UPDATE] It's official. The Koenigsegg Agera RS is the new fastest street-legal production car in the world after managing to post an average speed of 277.9 mph (444.6 kph) during the two runs that had to be done in opposite directions as per Guinness' requirements. Behind the wheel during the record-breaking attempt that took place in Pahrump, Nevada was Koenigsegg’s factory driver, Niklas Lilja. Racelogic was in charge of recording the data and verifying the all-important numbers.

After crushing the Chiron’s 0-249-0 MPH record a little over a month ago, Koenigsegg has apparently set its sights on taking down another record currently being held by Bugatti. Drive Tribe is reporting an Agera RS – the same model used to beat the Chiron - is in Nevada this weekend where it’s being put through its paces on a closed section of a road located between Las Vegas and Pahrump. It is believed the Swedish supercar marque has received a special permission from the Nevada Department of Transportation to close the road in order to perform the high-speed run.

The number to beat would have to be 267.81 mph (431 kph) achieved back in 2010 by an unrestricted version of the Veyron Super Sport in the hands of Bugatti’s official test driver Pierre Henri Raphanel at the Volkswagen Group’s Ehra-Lessien test track. It should be mentioned the road-going car that was launched after that, the Veyron Super Sport World Record Edition, had an electronic top speed limiter that kicked in about 10 mph sooner, at 258 mph (415 kph), to preserve the integrity of the tires.

As you probably are aware, Koenigsegg is not the only company attempting to improve the record established by Bugatti on July 4th, 2010. Hennessey with its new weapon, the Venom F5, is gunning for a ludicrous velocity of 301 mph (484 kph). Bugatti itself has promised it will try and take down its own record next year with the Chiron.

During the run, the Agera RS actually managed to reach 250 mph (403 kph) and it seems Koenigsegg is confident it can extract an additional 18 mph to beat the Veyron Super Sport. Will it succeed? We’ll just have to wait and see.