These aggressive behaviors make the road more dangerous for drivers and passengers. 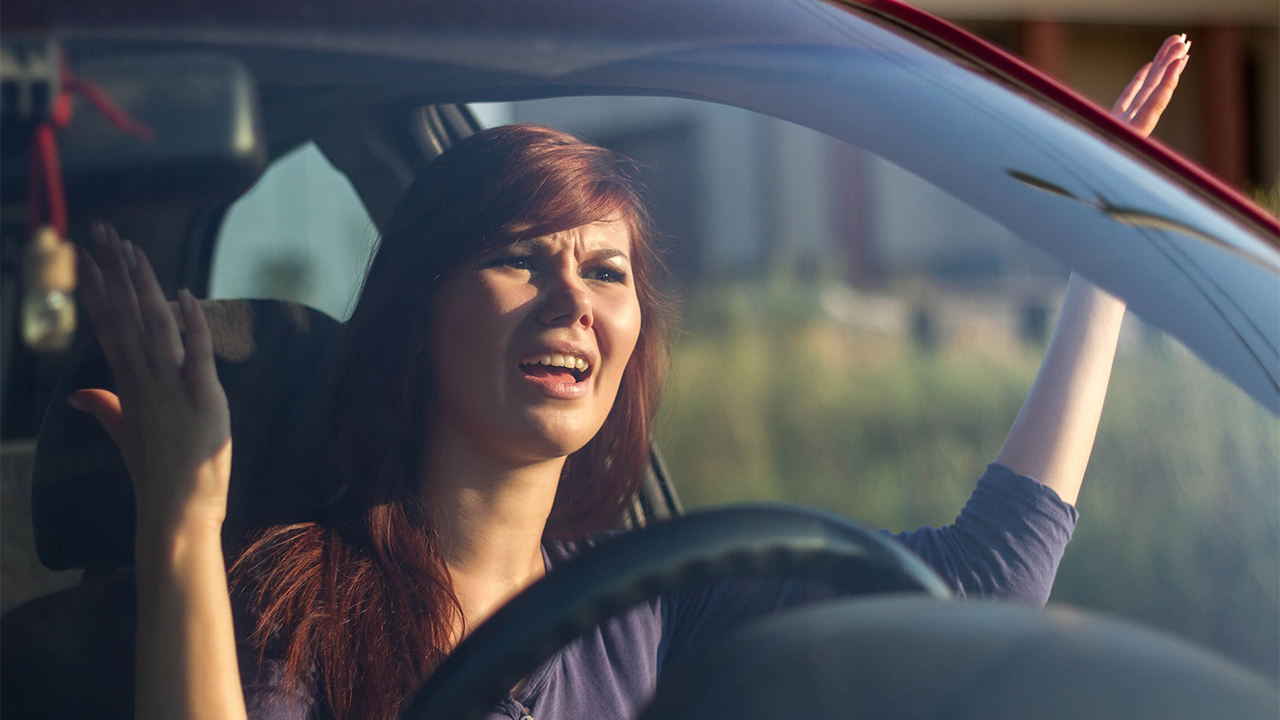 It can be easy to lose your cool when you’re frustrated while driving, but road rage can have dangerous consequences. Road rage statistics from the last several years paint a worrisome picture, with fatal car accidents and mental health issues stemming from the behavior.

Below are 17 road rage statistics that reveal just how dangerous and widespread the practice is.

Several factors contribute to the frustration and intimidation witnessed during road rage incidents. The most common stressors include heavy traffic, being late for work, and issues caused by distracted driving.

1. In a 2014 survey by AAA, 46.6 percent of drivers said they had yelled at another motorist in the past year, while 44.5 percent said they honked to show annoyance or anger. (AAA Foundation for Traffic Safety)

Minor frustrations that cause tension may seem insignificant, but even the most trivial situations can lead to road rage accidents.

2. In the same survey, 50.8 percent of motorists said they had deliberately tailgated other vehicles, while 25 percent said they had blocked drivers from changing lanes. (AAA Foundation for Traffic Safety)

Stressful traffic congestion can provoke serious acts of aggression on the road.

3. The same AAA survey found 2.8 percent of drivers purposely bumped or rammed other cars out of frustration. (AAA Foundation for Traffic Safety)

4. Nearly 12 percent of drivers surveyed had cut another car off on purpose, while 3.7 percent had gotten out of their vehicles to confront other drivers. (AAA Foundation for Traffic Safety)

It’s never a good idea to pay other drivers back for their reckless driving habits. In fact, this practice often adds harm and makes it nearly impossible to lower car insurance rates after an accident.

5. Aggressive drivers play a role in up to 56 percent of fatal car crashes. (AAA Foundation for Traffic Safety)

6. Nearly 80 percent of drivers in a 2019 survey had shown significant aggression while driving at least once in the previous 30 days. (AAA Foundation for Traffic Safety)

In other words, it’s possible that American motorists encounter some form of road rage or aggression behind the wheel nearly every day.

8. Twenty-six percent of drivers in a 2019 survey admitted to switching lanes very quickly or extremely closely behind another car. (AAA Foundation for Traffic Safety) 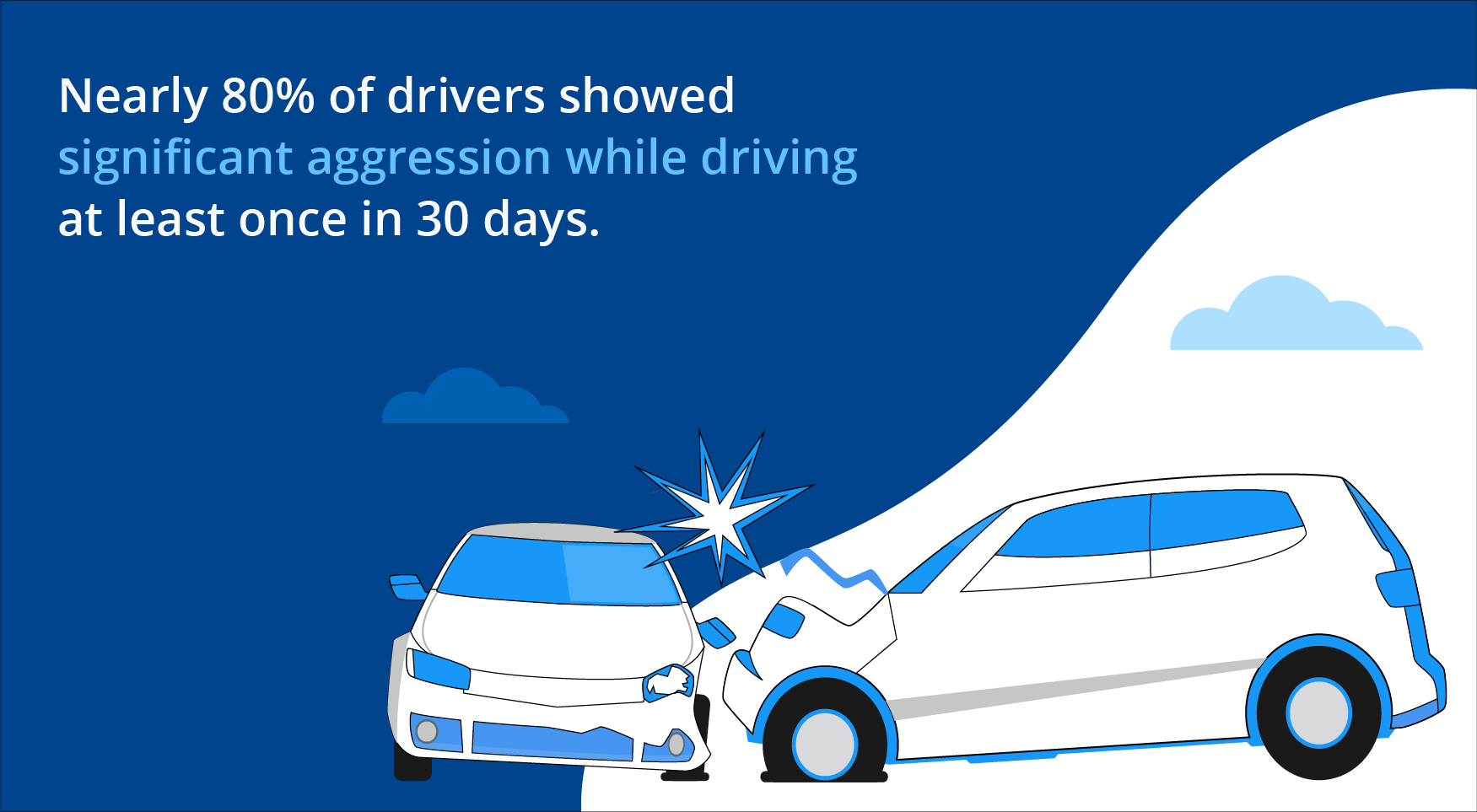 9. In a 2014 survey, 0.7 percent of drivers said they regularly interfere when other drivers change lanes, and 0.3 percent said they intentionally cut other vehicles off. (AAA Foundation for Traffic Safety)

These actions can lead to crashes and are primarily caused by frustration with traffic. It’s important to refrain from acting on impulses to avoid the trouble that can result.

10. People who consider themselves angry drivers are more likely to go 10 to 20 miles per hour over the speed limit. (American Psychological Association [APA])

Upset motorists think and act aggressively on the road, commonly hurl insults, and are more likely to inflict physical harm on others.

11. In driving simulations, enraged drivers got into twice as many accidents and reported more near accidents. (APA)

They also receive more speeding warnings and can show volatile behavior such as impulsiveness, angry outbursts, and episodes of anxiety.

12. Drivers in a 2019 survey who had been involved in one or more crashes in the previous two years were significantly more likely to engage in self-reported aggressive driving behaviors. (AAA Foundation for Traffic Safety)

Aggressive drivers’ attitudes on the road often make them repeat offenders even as they understand the consequences, such as struggling to get insurance after an accident.

Aggressive driving isn’t always just a harmless spurt of anger. Add in deliberate acts of violence and the road can quickly become dangerous.

13. Almost two out of three drivers in a 2016 study said aggressive driving was a bigger issue at that time than it was three years before. (AAA Foundation for Traffic Safety)

14. In the same study, nine out of 10 drivers said they believed other drivers' aggressive behaviors were major threats to their personal safety. (AAA Foundation for Traffic Safety)

Road rage also makes it more difficult for drivers to get cheap car insurance since it makes everyone more vulnerable on the road.

16. From January through May 2021, an average of 42 people per month were shot and either wounded or killed in road rage incidents in the United States. This number was nearly double the monthly average over the previous four years. (Everytown for Gun Safety)

The majority of road rage reports base data on a driver’s gender, age, and location. The road rage statistics below depict how demographics can influence aggression-based road incidents.

Women generally prefer to avoid aggressive motorists on the road instead of turning to aggressive driving tactics.

How To Avoid Road Rage

While some drivers face the temptation of road rage, it can be dangerous and even fatal. Road rage may not always be a crime, but statistics prove it can lead to serious hazards.

When motorists express anger and violence, it can backfire. If you’re involved in a road rage incident, expect to face significant costs – car insurance claims typically won’t cover damage you cause during road rage. The best ways to avoid causing accidents are keeping your temper in control and sharing the road responsibly.