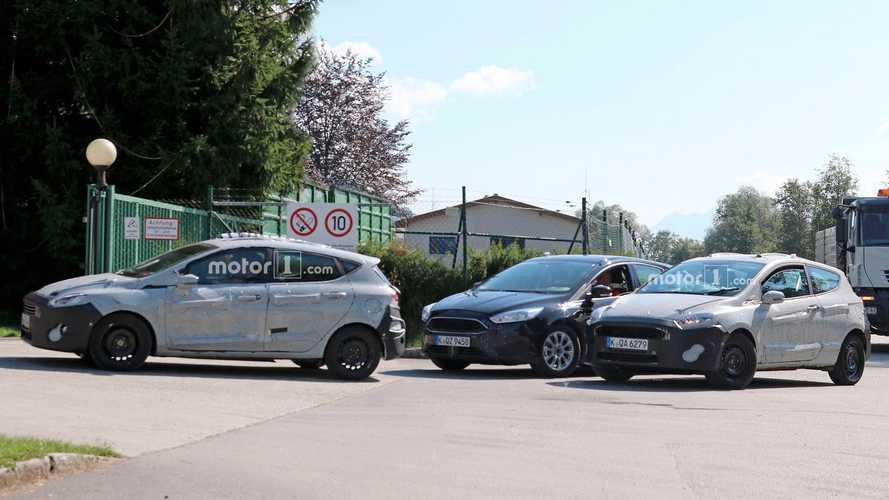 The hatchback reportedly takes a step upmarket with better materials and improved tech.

After getting a chance to see the next-gen Ford Fiesta five-door a few months ago, a new batch of spy shots lets us see the three-door body’s sporty look. The overall design evolves the vehicle's current shape and appears to include cues like the Blue Oval’s latest grille design.

Up to the B-pillar, the camouflage on these models makes them largely indistinguishable other than a different set of wheels. However, the three-door sports resculpted side glass that sweeps more sharply upward for a more performance-oriented look. The tweaks make this one look a little shorter, too. The rear appears identical, including a hatch-integrated spoiler.

These spy photos also include a single photo of the new Fiesta’s interior, but camouflage obscures most of the cabin. Earlier reports suggest Ford is making big investments there to improve the model’s material quality and driver assistance technology. A SYNC 3 infotainment system is almost certainly among the improvements, too.

Ford is taking a fascinating gamble with the new Fiesta. The next-gen model remains on the Global B platform but with adjustments to make it slightly larger. Ford is investing the money it would usually spend upgrading the chassis to give the hatchback a more premium feel, possibly even a range-topping Vignale trim. The Ka+ would be the choice for customers who don’t want the extra amenities.

As part of this step up market, the new Fiesta would allegedly be available only with Ford’s EcoBoost turbocharged engines. Naturally aspirated powerplants are still available in the Ka+, though.

The new Fiesta reportedly debuts in Europe in the first half of 2017. A simultaneous launch in the United States is unlikely, but American customers should have to wait too long after the unveiling for the model to cross the Atlantic.