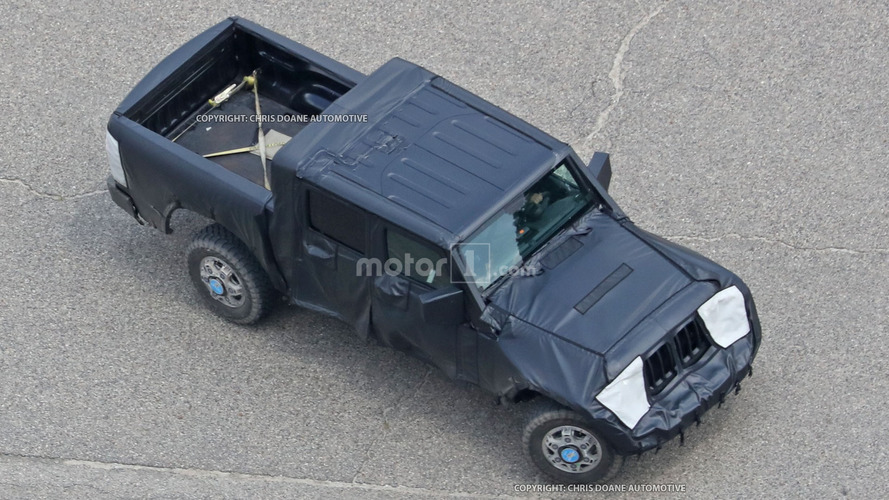 The Jeep Wrangler pickup is among the most anticipated vehicles coming to the American market, and we are finally getting a great chance to see it under development. These spy shots offer a superb look at the truck’s testing, including some very light off-road action.

This heavily camouflaged test mule uses the Wrangler Unlimited’s four-door body, but Jeep adds a pickup bed for better hauling. The front end is generally similar to previous spy shots, including a more steeply raked windshield than the current model. Take a good look at the back on this one, though. The rear axle looks too far forward for the cutout in the fenders. Therefore, we doubt this is the final design.

Even at this early stage, the Wrangler pickup appears to be a stylish entry in America’s growing mid-size truck market. The bed doesn’t look as big as on a Chevrolet Colorado, but buyers might find the Jeep’s classic looks attractive.

The pickup likely shares its powertrain range with the standard next-gen Wrangler. Rumors suggest the lineup includes a 2.0-liter turbocharged four-cylinder with around 300 horsepower, a hybrid, and a diesel engine. An eight-speed automatic would send power to the wheels, and presumably there would a manual gearbox available, too. The next-gen Wrangler is also lighter and more aerodynamic than the current one, which should mean major fuel economy improvements.

FCA will invest $700 million into its Toledo, Ohio, factory to produce the next-gen Wrangler, including the pickup. Production of the standard model will begin in 2017. The pickup will likely join the lineup about a year later.