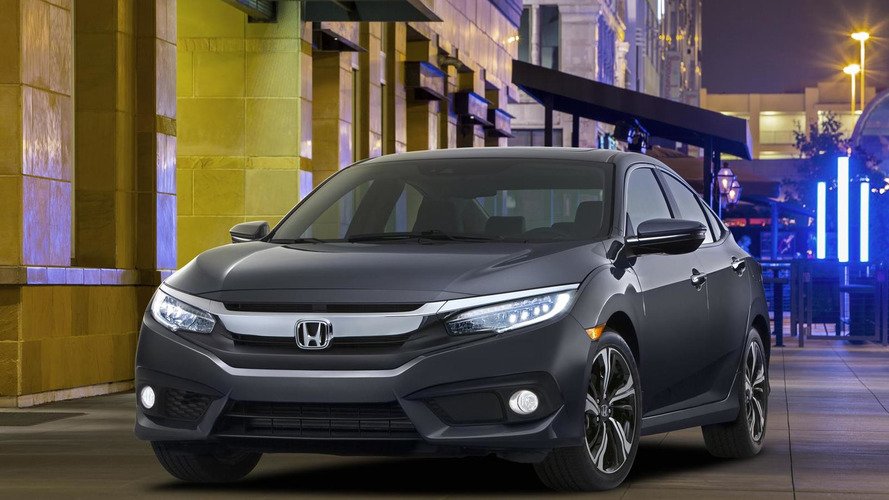 Honda has taken the wraps off the all-new tenth generation Civic Sedan in U.S. specification.

Honda has taken the wraps off the all-new tenth generation Civic Sedan in U.S. specification.

We saw it without any makeup about a week ago and now it's finally here and it is easy to see that Honda started almost from scratch with the new Civic which although it’s still a sedan, the silhouette is now much more dramatic and reminiscent of a fastback, especially when viewed from behind.

This is the first of many new Civics to come as Honda has plans for a coupe, five-door hatchback, beefier Si models and a range-topping Civic Type R which for the first time will hit stateside. The model at hand is almost two inches wider and one inch lower than the old version and it also has a 1.2-inch extended wheelbase.

Honda wants to move their tenth Civic upmarket which is why they plan on selling it with optional LED headlights whereas LED daytime running lights and taillights are standard across the range. The engineers have managed to improve torsional rigidity by 25% thanks to ultra-high strength steel while the sleek design has enabled an increase in aerodynamic efficiency of 12% which was partially obtained by installing full underbody covers.

Honda will sell the US-spec 2016 Civic Sedan with a choice of two engines: a 16-valve, 2.0-liter naturally aspirated unit and a new 1.5-liter which represents the first turbocharged engine provided by Honda in United States. According to Honda executive Sage Marie, the first one has gained 15 bhp (11 kW) for a total of 158 bhp (118 kW) and will be teamed up with a six-speed manual or a continuously variable transmission whereas the turbocharged mill is expected to develop 173 bhp (129 kW) sent to the wheels through a "unique CVT." Regardless of engine and gearbox, the overhauled Civic will return more than 40 mpg US on the highway.

Even though it is now substantially bigger, the new Civic is actually 68 lbs (30.8 kg) lighter and employs new body-sealing techniques that have lowered cabin air leaks by 58%. Speaking of the interior, it's also a major departure from the old car and looks more upscale with a better fit and finish as well as an extra 3.7 cubic feet of space and an additional 2 inches of rear legroom. In addition, the trunk’s capacity has jumped by 2.6 cubic feet and it now has a larger opening as well as a lower liftover height.

All models get automatic climate control (EX-L or above trims have dual-zone), electronic parking brake (with brake hold), auto up/down front power windows, adjustable driver’s seat thigh support with 14 degrees of tilt (on EX-L and above) and walk-away auto door locks. In addition, all models get a new center console that provides a total of 7.2 liters of storage space. There's also a new infotainment system featuring a seven-inch touchscreen display and supports both Android Auto and Apple CarPlay

Set to go on sale this fall, production of the 2016 Honda Civic Sedan (US-spec) will take place at the company's factories in Greensburg, Indiana and Alliston, Ontario, Canada. The two engines will be assembled in Anna, Ohio while the two CVTs will be made in Russells Point, Ohio, and Celaya, Mexico.