Here's a fresh look at the luxury wagon.

It has been a while since we've seen photos of the Genesis G70 Shooting Brake under development. These new shots catch the wagon on the road near the Nürburgring.

Despite not seeing the vehicle for several months, the Genesis engineers aren't ready to strip off much camouflage yet. Looking past the concealment, it seems that the front end design is identical to the sedan with elements like split headlights, a diamond-shaped grille, and large openings in the lower fascia.

The vehicle rides on five-spoke wheels with a dark finish. Red brake calipers are visible behind them.

The engineers load the back with extra panels to conceal the shape of the hatchback. There are split taillights and a pair of exhausts coming out of the passenger side.

While not visible here, the interior should look the same as the sedan. This means there would be a stylish, somewhat understated cabin with a widescreen 10.25-inch infotainment display on top of the center stack. 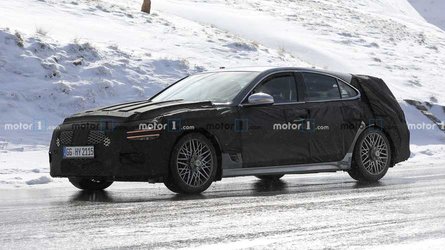 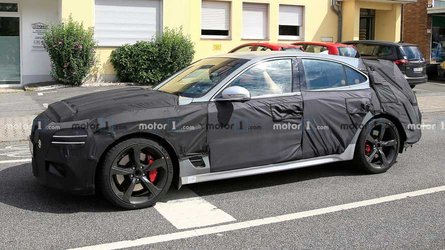 The wagon's powertrain should be the same as the four-door, too. In America, buyers would be able to get a 2.0-liter turbocharged four-cylinder with 252 horsepower (188 kilowatts) and 260 pound-feet (353 Newton-meters) of torque or a 3.3-liter twin-turbocharged V6 producing 365 hp (272 kW) and 376 lb-ft (510 Nm) of torque. Both powerplants hook up to an eight-speed automatic, and customers can select rear- or all-wheel-drive layouts.

We expect the Genesis G70 Shooting Brake to debut at some point in 2021. Although, the exact date is not yet clear. Another question is whether the brand intends to sell this model in America. The US isn't the strongest market for wagons, and the GV70 crossover would seem to fit the needs of folks looking for something with a hatch.