We spotted nine different test vehicles. Did we miss any?

BMW has kicked testing of the 2 Series Coupe (G42) into high gear as multiple prototypes have been spotted in and around Munich in Germany. We can see different trim levels, from lesser ones with a single round exhaust tip to the M Performance model with its bigger pair of angular exhausts. The adjacent spy video is a collection of clips recorded in recent months, so don't go into thinking all test vehicles were shot in a single day.

BMW hasn't exactly been hitting it out of the park recently in terms of design, so it's understandable why some people are expressing their skepticism upon seeing images of unreleased models testing as camouflaged prototypes. With these 2er test vehicles (we counted nine) still heavily disguised, it would be wrong to jump to any conclusions about the coupe's final appearance.

We're not going to avoid talking about the elephant in the room – which is BMW's new oversized grille – which seems to be missing. The cars are wearing a lot of mascara to conceal the front-end design, but the radar for the cruise control is visible and sits in the center of the lower grille. That leads us to believe the grille is more horizontal than it is vertical since it doesn’t seem to be extending all the way down like on the big-brother 4 Series Coupe.

One noticeable change is the door handle design, now flush with the bodywork instead of sticking out as it does on the current 2 Series. BMW is likely making this modification not just for the sake of design, but also to improve airflow and consequently boost the car's efficiency. Also visible is the trunk lid spoiler reserved for what will likely be the M240i model positioned right below the full-fat M2.

The Next 2er Is Inching Closer: 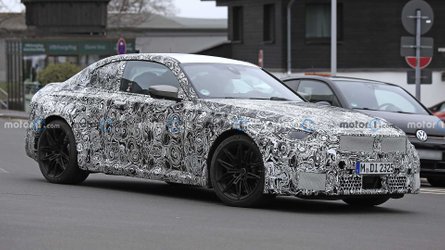 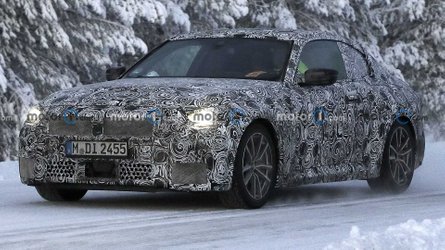 The range topper has also been spied plenty of times already, along with a mysterious 2 Series EV that seemed to have the M2's body. We're hearing a zero-emissions version is not on the agenda, so that must've been a test mule for the powertrain that will go into an entirely different electric Bimmer.

Expect BMW to unveil the next-generation 2 Series Coupe in the following months, complete with the M Performance model. The M2 top dog could arrive in 2022 before spawning several spicy derivatives. The jury is still out on whether the 2 Series Convertible will live to see a new generation since the demand for cars with folding roofs has taken a hit in recent years.