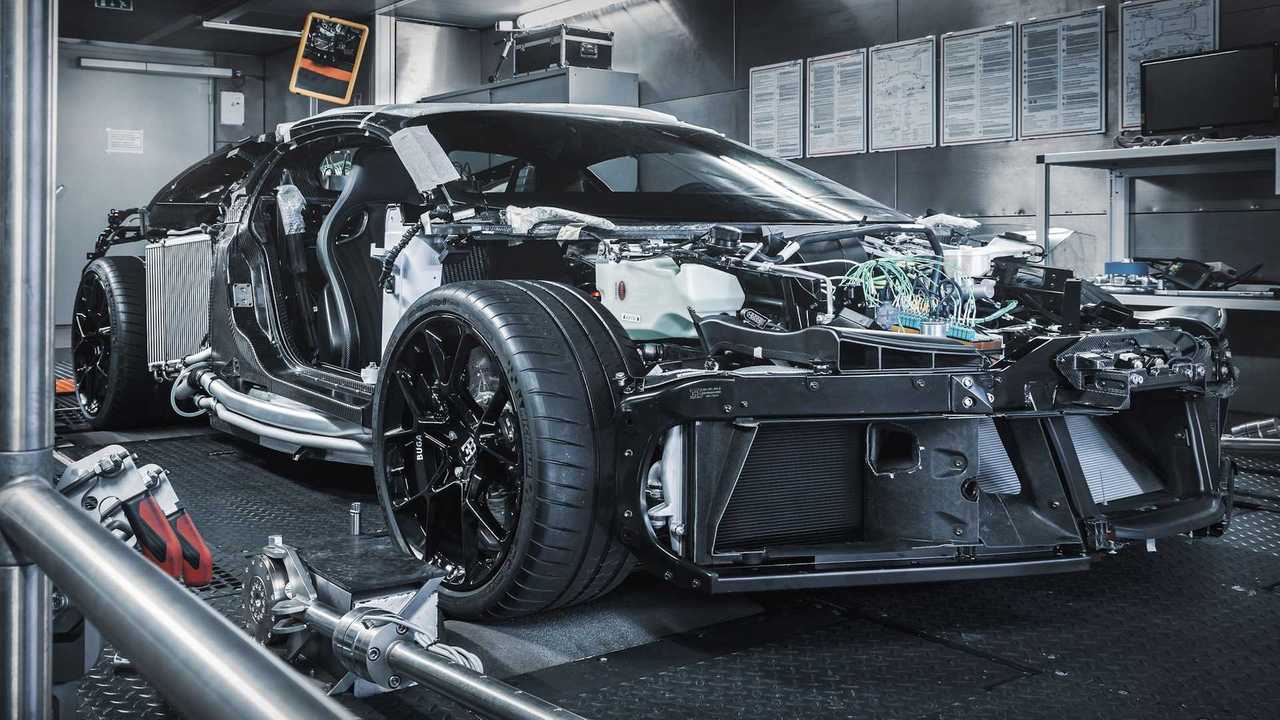 Underneath the sheet metal is an engineering marvel.

Bugatti introduced the limited-run Centodieci hypercar back in Summer 2019. Since then, the company has been fine-tuning the vehicle’s design, with the automaker announcing today that the team has now developed the first prototype. Customer deliveries aren’t expected to begin until 2022, though the company did release a photo set showing off the hypercar with its sleek sheet metal, and without it, revealing an engineering marvel underneath.

The naked Bugatti Centodieci reveals a copious amount of carbon fiber and the intricate plumbing needed to feed and power the quad-turbocharged W16 mid-ship engine. No fewer than five radiators are visible in the shots, a taste of the sophisticated thermal management system needed to keep the mill cool. Since the premiere, the company has worked on the technical implementation of the new limited offering, and the next step is for the automaker to begin building the exterior as dynamic testing is scheduled to begin in the next few months.

The dynamic testing, which will see prototypes hitting the test track, will be part of further advanced simulations and wind tunnel testing. The Centodieci pays homage to not only the EB110 introduced in the 1990s, which presented the challenge of adapting the EB110’s flat, wedge-shaped body for Bugatti’s modern platform. The EB110’s influence is quite noticeable – the Bugatti horseshoe grille is much smaller while the brand’s iconic C-shaped B-pillar is gone, replaced by five diamond-shaped air inlets.

Get Caught Up With The Latest Bugatti News Bits:

Bugatti Explains How It Developed The Wild Bolide Track Star
⠀

Enjoy The Bugatti Chiron Pur Sport In Some Breathtaking Scenery

Bugatti will produce just 10 Centodieci models – all of which have already been sold. Each had a starting price of €8 million ($9.7 million at current rates) plus VAT, too. Those customers will receive a hypercar powerhouse that produces 1,578 horsepower (1,176 kilowatts) that’s 44 pounds (20 kilograms) lighter than the Chiron. Bugatti claims the car can hit 62 miles per hour (100 kilometers per hour) in 2.4 seconds. Its top speed is electronically limited to 380 kph (238 mph).