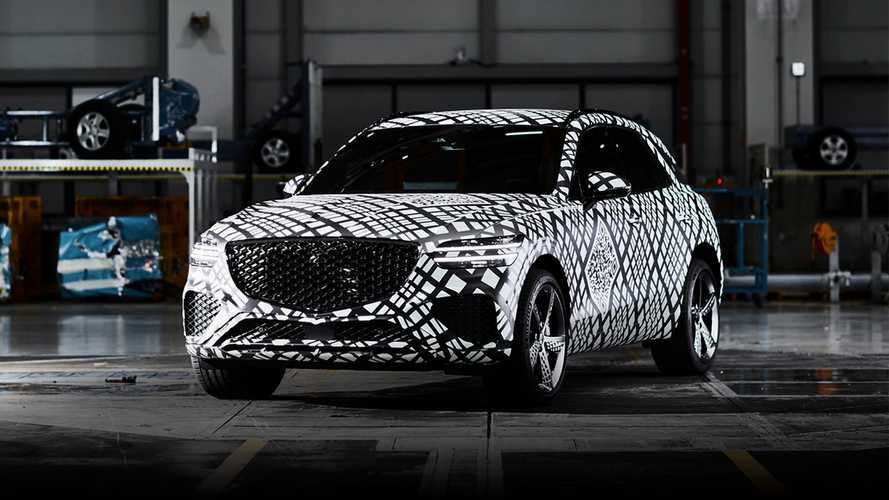 With the GV80, Genesis was fashionably late to the luxury SUV party, but Hyundai’s premium marque is making up for lost time with a second high-riding model. Meet the GV70, teased here for the very first time ahead of an official reveal expected in the coming weeks. The South Korean brand remains coy on details for the time being, only saying the model rides on a rear-wheel-drive platform and that prototypes will undergo final testing locally for about a month.

Although dipped the GV70 remains dipped in camouflage, it’s easy to notice the styling won’t stray away too far from the larger GV80. The “two lines” lighting motif lends the posh SUV an interesting look, while the crest grille is quite large and imposing. Those air intakes on the sides of the bumper are also rather large and seem to be just for show as they’re blocked off.

Chances are the Genesis GV70 will have a lot in common with the G70, which received a mid-cycle facelift earlier this month. The refresh received by the luxury sedan also gives us an idea of how the SUV’s interior is going to look, with a new 10.25-inch infotainment system located at the top of the center console. A fully digital instrument cluster is expected, along with lots of other tech goodies like wireless charging and over-the-air updates.

The Audi Q5 rival is expected to get turbocharged 2.5- and 3.5-liter gasoline engines and a 2.2-liter diesel in some markets. A fully electric version is also in the works and is expected to debut sometime in 2021. Rear- and all-wheel-drive versions are going to be available, and we wouldn’t hold our breath for a manual transmission.

Beyond the G70 sedan and GV70 SUV, spy shots have revealed Genesis is working on a G70 wagon to complete the lineup.

The wraps should come off before the end of the year ahead of a market launch in 2021.