It could debut at next year's Geneva Motor Show.

The Germany-based company Elektron Innovativ is behind the Elektron One, and it intends to build the vehicle in Italy's Motor Valley area, which is near the workshops for brands like Ferrari, Lamborghini, and Pagani. The fledgling automaker is also working to form a Formula E team called Scuderia-E. Elektron Innovativ wants the knowledge from motorsport development to influence the hypercar. 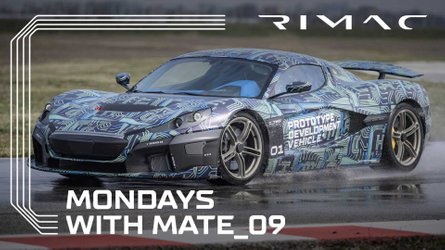 Ride Along With Rimac Founder And Test Driver In The C_Two 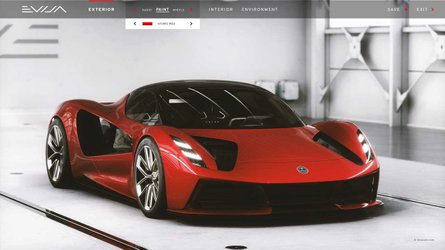 The Elektron One has a composite monocoque using a mix of carbon, aramid, and biofiber. The company intends for the vehicle to have a push-rod suspension layout.

From these renderings, the Elektron One has a shape that's similar to other supercars. Its best angle is at the rear where there are heavy creases and hard angles.

"The Elektron was created to be a sports car brand," company founder Armağan Arabul said. "I don't think of making any 4-door model. If there is such a thought in the future, I can consider doing it under another sister brand. However, when it comes to two wheelers, I can consider seeing the Elektron logo on an e-superbike. That would be wonderful."

When the Elektron One enters production, the company intends to build 140 examples of the hypercar each year. After establishing the standard model, the business would like to add a spider variant, a track-oriented version, and eventually a vehicle with even higher performance.

Elektron One is an electric supercar that will be produced in Italy with a Turkish heart, and it wants to be a pioneer in its field. The fact that Elektron’s team is also active in the Italian-Turkish Formula E team also gives clues about the technological superiorities in the car.

A life full of passion for cars is about to make a dream come true. Elektron One is planned to be produced in the Motor Valley in Italy, becoming neighbours to Ferrari, Lamborghini, Pagani and Maserati. This car can be the electric supercar that many have been expecting for a long time.

Usually the best stories are stories that suddenly come to the spotlight after humble beginnings. We had an example of Elon Musk, who created Tesla from nothing, and even Rimac, which quickly became one of the major automotive companies. Still, the electric supercars of these two companies seem to have to deal with Elektron One, a new and a very ambitious player.

The project is initiated by the businessman Armağan Arabul, who is an Electrical and Electronical Engineer graduated from the University of Bath/UK, and it transformed the automobile and motorcycle passion that Arabul has had since childhood into an ambitious mission. Arabul started the project in Ankara within a family company, with the idea of ​​creating an extremely-high-performance, state-of-the-art electric supersports car with the touch of innovative technologies. About 2 years later in 2017, Arabul had to leave his company to make his dream come true and direct his full-time concentration to this project for success. Thus, he established Elektron Innovativ GmbH in Germany for an exclusive and high quality production that will start with 140 units per year. In 3 years, it is planned to increase the production numbers to over 500. In addition, the company's mid-term plans include a spider, a track-oriented version and a hypercar that it will develop in 5 years.

"I have been in the energy sector since 2002," says Arabul. “Major steps have been taken in the energy sector for renewable and sustainable energy for a long time. This is vital for the bright future of our world. Unfortunately, these steps started to be taken very late in the automotive industry. The main reasons for this are the high and long-term investment costs for the components in cars with internal combustion engines, the supply chain being adjusted for these cars, and that after-sales services require huge differences for electric cars. On the other hand, electric cars today appear as alternatives to internal combustion cars, having lower operating costs but not giving the same feeling or pleasure. Our goal is to show that electric cars are not alternatives, but can be the cars specially chosen, when compared with internal combustion cars, and that in all segments these cars can be better than anything else in the segment. ” Regarding the price of the car, Arabul says, “There are electric cars that can feel like a real supersports car now, for example Pininfarina Battista and Rimac C2. However, the prices of these cars are much more than million euros and their production quantities are very low. We will keep Elektron One in the 330-350 thousand EUR price band before tax and ensure that this car remains at a relatively more accessible level. We are planning to become the first electric supersports car brand to produce in mass production quantities". For the question: "Will we see the Elektron brand in other segments in the future?" "The Elektron was created to be a sports car brand," answers Arabul. “I don't think of making any 4-door model. If there is such a thought in the future, I can consider doing it under another sister brand. However, when it comes to two wheelers, I can consider seeing the Elektron logo on an e-superbike. That would be wonderful."

The supersports car, which is currently in the prototype stage, will be introduced for the first time at the 100th Geneva Motor Show in 2021 (If the event takes place) and will have a total power of 1 MW (1341 HP). This power to be produced by electric motors will be transferred to the road by a four-wheel drive system. As well as a push-rod suspension system, the car will have an innovative composite monocoque chassis consisting of carbon, aramid and biofiber components and within which the battery cells are embedded. During the development of the vehicle, ideas and skills were exchanged with Imecar and its owner Mark Lander in Antalya, and solutions were created in fine details. Imecar is a well-known company in the fields of electric motors, batteries and software, and will cooperate with Elektron Innovativ in the production of Elektron One.

Today, the industry closely follows that, together with Armağan Arabul, Gianfranco Pizzuto, Mark Lander and Massimiliano Zocchi have initiated Scuderia-E, the first Italian-Turkish Formula E team in the world. Armağan Arabul and Elektron Innovativ are included in the project in order to improve the competitiveness and production ability of the team, while also supplying technical support.

Arabul, whom Gianfranco Pizzuto persuaded to move to Italy, have started preparations to move the production of Elektron One to the Italian Motor Valley in parallel with the Formula E project and establish the company headquarters under the same roof with Scuderia-E. On the other hand, Arabul says, “Elektron Innovativ is a German company, situated in Frankfurt. We will also continue our business in Germany. Some of the development and engineering processes of Elektron and Scuderia-E will be performed at this center.”

During the development of Elektron One Armagan Arabul has not only led, but he has also been a major part of the design and engineering of the car. On the other hand Arabul has participated in Go-kart, Volkicar-V1 races and many track days for nearly 20 years. Therefore in addition to his high technical expertise; as a racing pilot, he took part not only as a spectator but also as a contender in motorsports. Looking at the technical details of the car, it is possible to see the signals that Arabul transferred the experiences he gained in the racing world to the project, while developing Elektron One.