Rumors hint at two possibilities for the V8 that Land Rover might use.

A new batch of spy photos provides a fresh look at the V8-powered Land Rover Defender's development. This one has a body in an attractive two-tone color scheme, and there's no camouflage. "Prototype Vehicle" decals on the body are one of the major indicators that this is something special.

At the back, the four exhaust tips are the other primary sign that this is a new version of the Defender. There's a pair of square tips on each side and a prominently visible muffler between them. The engineers also leave off the spare wheel from the hatchback.

The V8 engine underneath the hood is still a mystery, but there are rumors of two possibilities. Jaguar Land Rover intends to use BMW powerplants in some of its future models. This opens up the Defender to use the German twin-turbo 4.4-liter eight-cylinder powerplant. In the top current tunes, this mill is good for as much as 617 horsepower (460 kilowatts) and 553 pound-feet (750 Newton-meters). Although, don't expect the version in the Defender to be quite as potent.

Looking up an earlier development vehicle's registration in the United Kingdom showed it using a 5.0-liter V8. This suggests that the Defender might share the supercharged eight-cylinder with models like the Range Rover, Range Rover Sport, and Range Rover Velar. However, the company reportedly intends to phase out this powerplant, so the automaker would allegedly stockpile enough of the engines to make a limited run of V8-powered Defenders.

The Defender Is On Patrol: 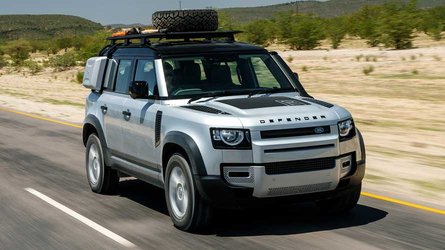 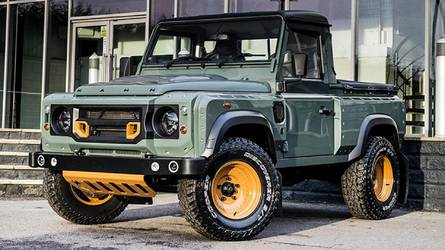 So far, spy shots only show the four-door Defender 110 model as the test mule for the V8 model. It's not yet clear whether the company would offer the eight-cylinder powerplant in the smaller 90 variant, too.

The V8 Defender reportedly arrives in late 2021. Expect to see a lot more spy shots of its development before the debut.