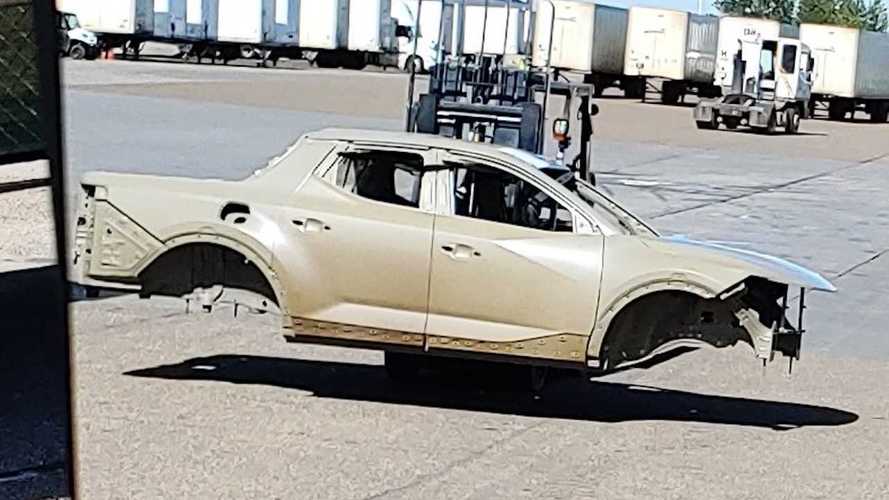 Hyundai has been making quite the buzz lately with its upcoming pickup truck, the  Santa Cruz. The unibody pickup truck debuted its production form, albeit completely wrapped in camo, in a set of spy shots back in February. We rendered the truck based on those photos, but it's hard to be certain with such heavy camo. Thanks to a recently leaked image that shows the truck's full-body, we have a lot less to wonder about.

Sent over by a Motor1.com reader who wishes to remain anonymous for obvious reasons, this leaked photo of the Santa Cruz gives us a clearer picture of what the Hyundai pickup truck will look like – at least from the side profile.

The photo confirms the short bed, and the sloping C-pillar that we first saw on the concept photos. Look closely at the image and you also see a crease in the passenger door similar to that of the new Elantra. Otherwise, we're left wondering how the rest of the puzzle pieces will fall into place.

While the concept images provided a great first look at the Santa Cruz, we're excited to see the production truck shape maintain the same basic recipe, with some design cues found in the rest of the Hyundai lineup.

Hyundai will produce the Santa Cruz at its Alabama plant alongside the Santa Fe, Sonata, and Elantra. There are no concrete details of late, but we do know that the unibody pickup will be exclusively sold to the American market, with an expected launch in 2021.