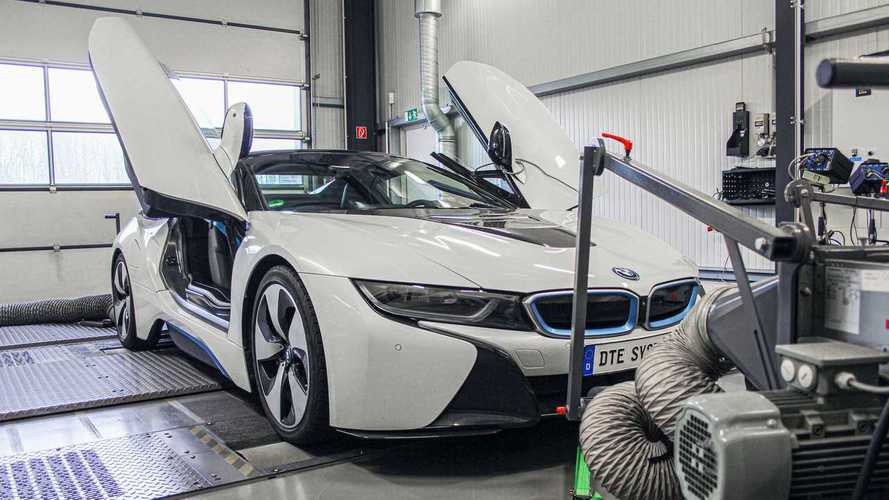 And fuel consumption is decreased by 15 percent.

The BMW i8 is now dead. Though the automaker didn't celebrate the end of its production, probably because of the current pandemic, it was officially announced that the production of the electrified sports car will take a halt by mid-April, which was way behind now.

The i8 bid farewell to the world with the following final power output: 369 horsepower (275 kilowatts) and 420 pound-feet (570 Newton-meters) of torque. Not too shabby, considering that these numbers come from a 1.5-liter inline-3 gasoline engine – with the help, of course, of an electric motor with 11.6 kWh battery pack.

But DTE Systems want the i8 to do more, and the tuning company made it happen through its PowerControl RX. Through this plug-and-play chip tuning module, controlling nine channels in a multimap and works with the i8's stock ECU, DTE is able to juice out additional 40 hp and 49 lb-ft of torque for a final output of 409 hp and 469 lb-ft.

The i8 can go from zero to 62 miles per hour (100 kilometers per hour) in 4.6 seconds in its stock form. With this new power output, we should expect an improvement that puts it at low 4s, though DTE didn't disclose any performance ratings just yet.

BMW i3s And i8 Get Dark Special Editions, i8 To Be Axed

Alpina Once Made A Four-Cylinder i8 With 460 Horsepower

Official: BMW i8 Production To End In April

According to DTE Managing Director Dr. Michael Krecek, increasing the i8's power output was "quite a challenge," but not with DTE's model, of course. Of note, the PowerControl RX supports all advanced engine technologies, including biturbo systems and hybrids. The company specifically mentioned in its release that it can even provide additional boosts to cars from Porsche, AMG, Audi RS, and BMW M.

Interestingly, DTE said that the increased output of the i8 also improved its fuel consumption by 15 percent through the PowerControl RX.