The Drako GTE is a forthcoming electric performance sedan, and in a new video the company shows off how it performs against a Tesla Model S P100D Ludicrous+, which is competing in a similar segment. As you'd expect from an automaker-produced promo video, the company's machine beats the challenger, but this is still a great opportunity to see how the upcoming EV accelerates in a straight line.

The angle in this video makes it appear that the GTE and Model S remain fairly close at the launch. Then, the Drako's extra power then gives the car a huge advantage through the rest of the race.

The Drako GTE packs four electric motors – one per wheel – that make a combined 1,200 horsepower (895 kilowatts). Total wheel torque is a claimed 6,500 pound-feet (8,813 Newton-meters). The company indicates the top speed is 206 mph (332 kph). It uses a 90-kilowatt-hour battery, and a Drako Motors spokesperson indicates that the estimated driving range is 250 miles (402 kilometers). Performance is more about speed, and the GTE also uses Öhlins four-way adjustable suspension components and carbon-ceramic Brembo brakes.

Get More Details On The Drako: 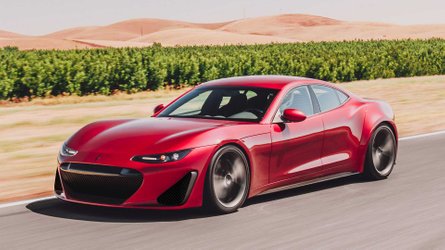 The powertrain has the ability to alter the motors' output at each corner. For example, sharper handling is possible by applying a positive torque force on the outside wheel during a turn and negative torque on the inside wheel. Drivers can control things from dials on the center console that can alter the driving mode, select the surface, change the regenerative braking, and affect the power at the front wheels.

Drako Motors intends to make 25 units of the GTE at a price of $1.25 million each. A company spokesperson tells Motor1.com that assembly of the vehicle is now underway, and the company is on track to deliver the first one later this year.