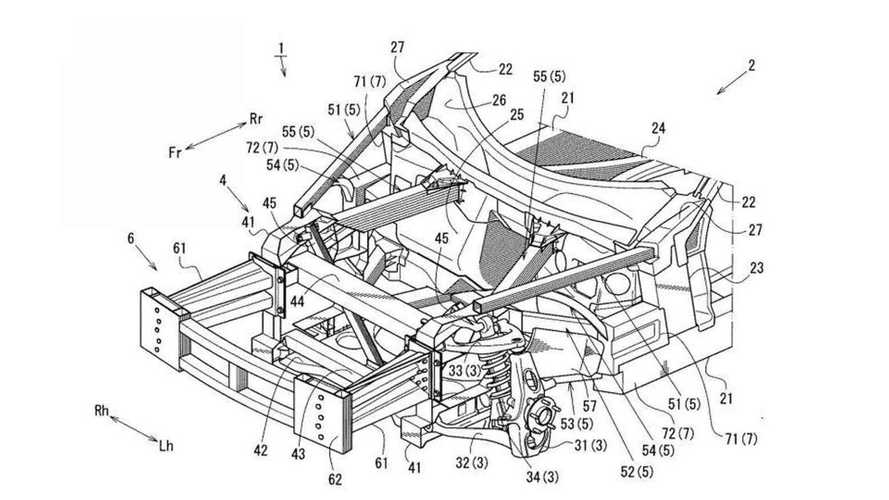 It would use a space frame with a double-wishbone suspension and engine location behind the front axle.

A patent from Japan reveals Mazda's development of a space frame chassis that could potentially underpin a future rear-wheel-drive sports car, like the long-rumored, much-anticipated RX-9. The filing is specifically for a “Vehicle Shock Absorbing Structure” and shows a bumper connecting to the platform.

The Japanese publication Motor Magazine discovered the patent. It notes that there's a double-wishbone front suspension. A crossmember in the engine bay appears to force the powertrain to sit behind the axle, creating a front-mid engine layout. The platform uses a mix of carbon fiber reinforced plastic (CFRP) and aluminum in an effort to keep weight to a minimum.

"There seems to be no platform sharing between the RX-9 and other vehicles. I recognize that the RX-9 will be built on an independent platform," an unnamed Mazda source told Motor Magazine, as translated from Japanese to English. The publication speculates that the chassis layout visible in this patent could be the underpinnings for the new sports car.

Filing a patent doesn't mean a company necessarily intends to build the tech in the pictures, it's just a way of reserving the idea so that other companies can't use the concept. This is worth noting because Mazda's CEO Akira Matsumoto doesn't seem too hot on the idea of introducing the RX-9.

"Inside Mazda, we all have the dream of seeing one day a vehicle powered by a rotary engine. But given the number of things we have to do, we had to put this on the back burner, and we have no time frame," he said in June 2019.

There are signs that the RX-9 isn't completely on the back burner, though. For example, a spy video in July 2019 showed two lightly camouflaged RX-8s lapping the Nürburgring during an industry testing period. It was odd to see such a vehicle that was long out of production hitting the track again for evaluation.