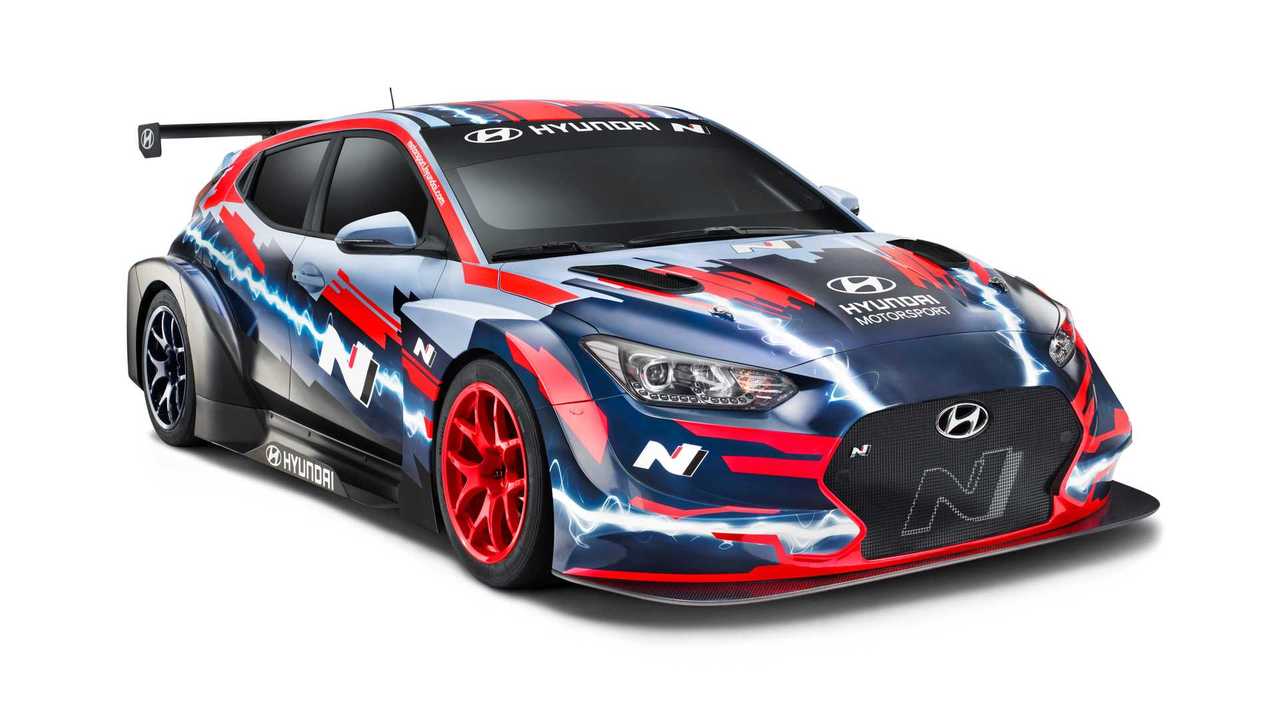 The single electric motor is mounted in the middle.

Electric cars are popping up in every corner of this year’s Frankfurt Motor Show. In addition to full EV reveals like the Volkswagen ID.3 and numerous hybrid offerings such as the Mercedes GLC 350e, Hyundai showed up with a full-fledged electric Veloster race car. Called the Veloster N ETCR, it’s the first such offering from Hyundai and will compete in the new ETCR championship.

See Other Hyundai Premieres From IAA:

On the outside, the EV racer looks pretty much like its internal-combustion counterpart, the N TCR. In place of the 350-horsepower (261-kilowatt) 2.0-liter turbocharged four-cylinder, the ETCR gets a single electric motor. Unfortunately, Hyundai doesn’t have any power ratings to offer just yet – a full testing program is slated to begin later in September. What’s extremely intriguing about the ETCR isn't just its electric power, but that it’s sent to the rear wheels.

The Hyundai Will Race Against An Alfa Romeo

Electric Alfa Romeo Giulia Debuts Ahead Of Going Racing In 2020

That’s right, this Hyundai Veloster is rear-wheel drive. It gets even better, because that single electric motor isn’t up front, but mid-mounted behind the driver. So while this Veloster might look like the turbocharged front-wheel-drive TCR, it should be a completely different animal on the track.

“Today, we have experienced another special milestone in the history of Hyundai Motorsport,” said Thomas Schemera, Hyundai executive vice president and head of product division. “We are proud to reveal the Hyundai Veloster N ETCR, our first electric race car, designed specifically for ETCR regulations. We have been anticipating this moment for some time and we are thrilled to open this exciting new chapter for our company.”

The interesting reveal is a bit light on details, but with this Veloster sending its electric power rearward in a mid-motor layout, we are extremely curious to see what else is hiding beneath the colorful graphics and massive rear wing. For now, it will garner attention at the 2019 Frankfurt Motor Show starting September 12.

Based on the road-going Veloster N model, the new car is designed specifically for the new ETCR championship, which will make its debut in 2020. The Veloster N ETCR heralds an exciting new era for Hyundai Motorsport, which will see electric racing become one of the pillars of the company.

Designed and built at the company’s Alzenau headquarters, the Veloster N ETCR is fully electric, rear-wheel-drive with a mid-mounted motor – two firsts for a Hyundai Motorsport project - in line with ETCR regulations.

Design work began in November 2018, with the first shakedown of the prototype completed in August 2019. A full testing program will commence later this month, supported by Hyundai Motorsport’s trained and experienced engineers, with two Veloster N ETCR cars to be produced for the first ETCR season.

The project will be integrated alongside the company’s continued commitments as a manufacturer within the FIA World Rally Championship (WRC), as well as its Customer Racing efforts with the i20 R5, i30 N TCR and Veloster N TCR. As part of Hyundai Motorsport’s role as a development centre for high-performance cars, all learnings from the Veloster N ETCR will be shared with Hyundai’s global R&D facility in Namyang, South Korea.