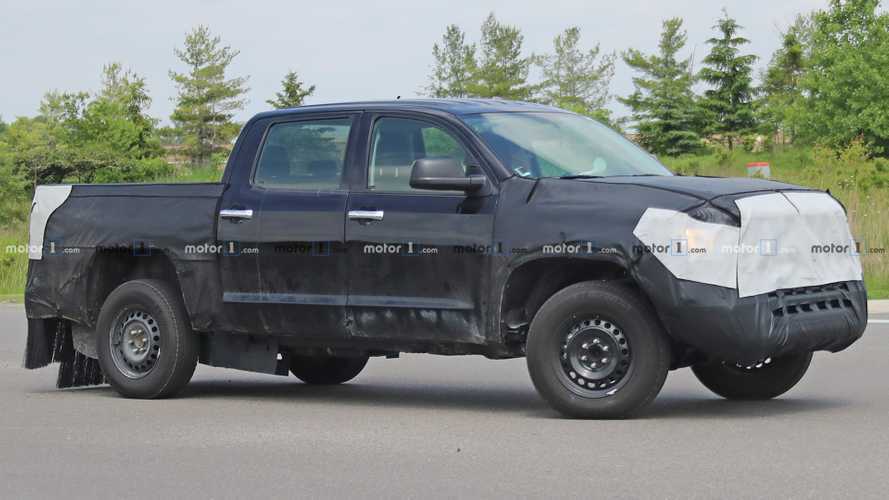 Whatever it is, Toyota doesn't want us to see underneath.

A weirdly camouflaged Toyota Tundra test mule is under development in Michigan. When leaving a traffic light, the only sound coming from the pickup until around 30 miles per hour (48 kilometers per hour) is an electric hum, according to the spy photographers. The evidence of the noise and concealment combine to suggest that this might be our very first look at the brand's upcoming hybrid powertrain for the truck.

Toyota camouflages the front and rear of this Tundra, and the concealment does a very good job of hiding the vehicle's details. In front, the grille appears a little different from the current pickup, including seeming to have a larger emblem in the center.

According to a recent rumor, the hybrid Tundra would use a version of the electrically assisted twin-turbo 3.5-liter from Lexus models like the LS 500h. The output in the luxury sedan is 354 horsepower (263 kilowatts), but the speculation posits that this variant could make 450 hp (335 kW) and 500 pound-feet (677 Newton-meters) of torque.

Another rumor suggests Toyota has a shared platform that could be ready in time for the new Tundra, Tacoma, and foreign-market trucks. The new underpinnings would allow for increased component sharing among the vehicles, which brings their cost down. Toyota's engineers are also reportedly making sure that these vehicles can support electrified powertrains, which is a detail that also seemingly fits with these new spy shots.