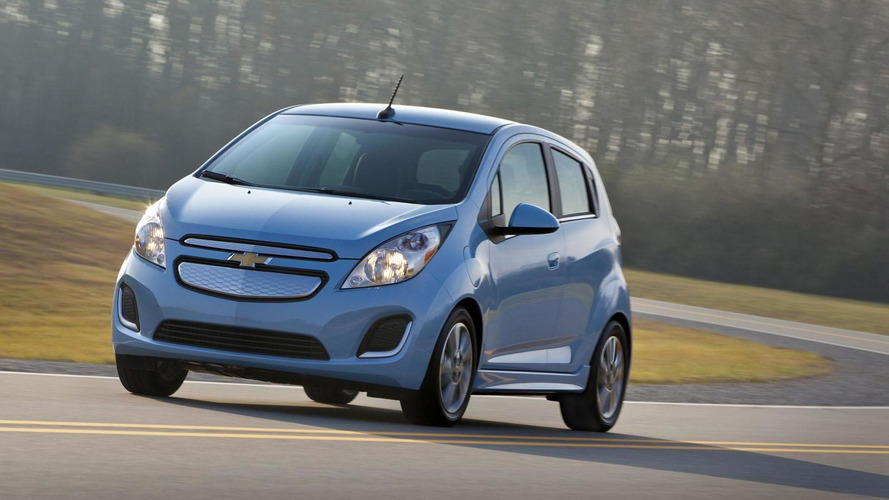 Chevrolet has released new details about the 2014 Spark EV.

Set to debut at the Los Angeles Auto Show, the pint-sized electric vehicle features a revised exterior with a Volt-like grille, aerodynamic rocker panels and an integrated tailgate spoiler. There are also full-length underbody panels, a rear diffuser and a lower air intake with an active shutter system. Thanks to these modifications, the car has a .325 drag coefficient which contributes to approximately 2.5 miles (4km) of additional EV range.

The cabin closely resembles the standard Spark, but adopts a digital instrument cluster, Electric Blue trim and chrome accents. There's also a MyLink infotainment system and a "confidence" gauge that shows the expected driving range based on conditions.

Power is provided by a 20+ kWh lithium-ion battery which motivates an electric motor that develops 130 hp (96 kW) and 400 lb-ft (542 Nm) of torque. It enables the model to accelerate from 0-60 mph in less than eight seconds and have a best-in-class EV range. When the battery is depleted, it can be fully recharged in less than seven hours using a 240V outlet. If that's too long, the SAE Combo DC Fast Charger can give an 80 percent charge in just 20 minutes.

When the model goes on sale next summer it will be available in the states of California and Oregon as well as Canada, South Korea and other undisclosed international markets. Detailed pricing information hasn't been released, but Chevrolet says the Spark EV will cost less than $25,000 - after tax incentives - in the United States.