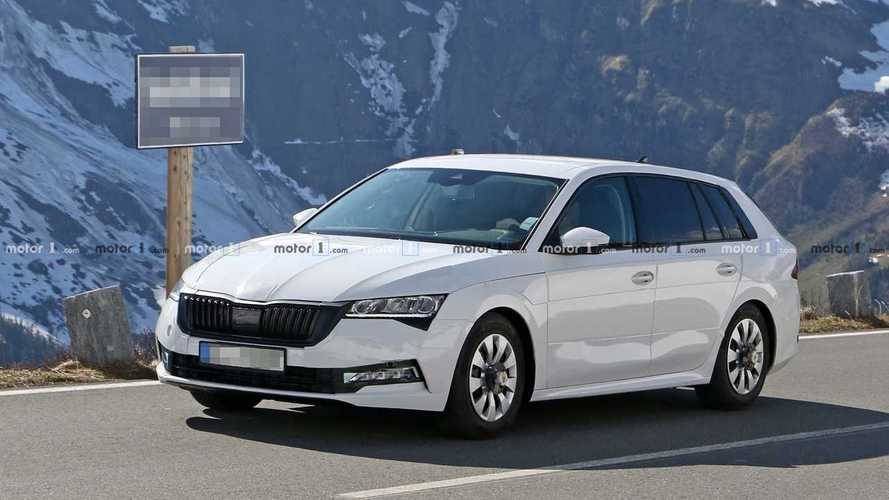 Maybe it's because of the disguise, but it looks larger than the outgoing model.

Skoda just introduced the facelifted Superb lineup and the all-electric Citigo, but the company’s biggest reveal planned for 2019 is yet to come. We’re talking about the all-new Octavia, which this year is celebrating its 60th anniversary and will be revealed in the following months. The announcement was made by the automaker’s boss, Bernhard Maier, earlier this year during Skoda’s annual press conference. Now, new spy shots from the beautiful Alps have emerged to show the fourth iteration of the modern Octavia.

As it was the case with just about all prototypes spotted in recent weeks, this one too is the wagon variant and appears to be carrying the full production body. However, don’t get too excited just yet because the Octavia Combi is still heavily camouflaged from front to rear. Skoda slapped on some fake panels on the actual bodywork and decided to paint them in white to trick us into believing the test vehicle was undisguised.

Even the headlights are covered with faux stickers, but the uninterrupted LED daytime running lights at the bottom of the clusters are visible and confirm the report about Skoda’s decision to revert to conventional headlights instead of keeping the O3 FL’s weird split headlight design. Side note – as an owner of the outgoing Octavia hatchback, I can tell you the headlight assembly is still a one-piece cluster even though from the outside it looks divided into two parts.

The taillights are masked as well and seem to be extending on the tailgate for the very first time. That annoying white paneling I mentioned earlier has been applied onto the tailgate as well, but there are some tiny cutouts likely to make the reverse lights visible. We can actually spot some of the taillight’s graphics while the prototype is braking, showing they’re quite different than the ones on the current Octavia Combi. The roof-mounted spoiler appears to be sticking out more than the usual, while the exhaust remains fully concealed underneath the bumper.

The quarter glass and a significant portion of the rear pillar remain concealed underneath the black and white disguise, but we can still observe the greenhouse won’t be going through any major changes. For what is officially a compact car, the Octavia wagon looks quite large and we’re wondering if the fourth installment of the model will grow furthermore.

The absence of roof rails on a wagon is noticeable right away, but surely the production model will have them for even more storage capacity if for whatever reason the cavernous trunk won’t be enough. The current Combi can already swallow a whopping 610 liters (21.5 cubic feet), which is basically midsize car territory.

When will we see the final version? Skoda hasn’t released an exact date, but maybe the Octavia IV will premiere at the Frankfurt Motor Show in September. However, the VW Group might want to show the new Golf first (due in October) before releasing its more practical Czech cousin. After all, the current version of Skoda’s best seller was the fourth MQB car to debut after the VW Golf, Audi A3, and SEAT Leon in 2012.