Buy Toyota Supra Camo Wrapping Paper For A Good Cause 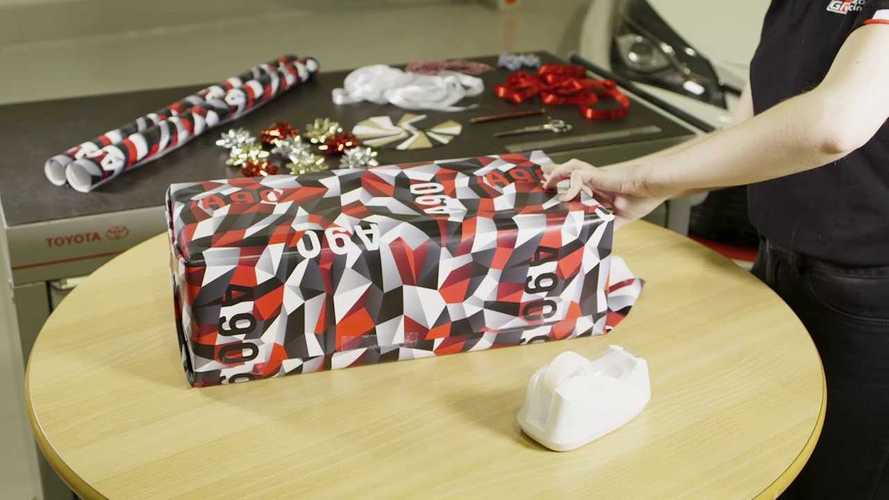 Just in case you haven't wrapped your holiday presents yet, here's an idea.

Out of all the camo wraps that we've seen so far in our spy shots, the one used in the upcoming Toyota Supra could very well be the most iconic ever. In fact, it's so iconic, motoring journalists from around the world was able to test drive the Supra prototype that's wrapped in its black, red, and white livery. Toyota revealed the legendary sports car's track prowess but not its entire face – it's like there but not really.

Well, not until a leaked image of the production Supra surfaced the web.

With that in mind, Toyota puts leverage on the anticipation and excitement about the 12-years-in-the-making Supra by creating the very last thing you could imagine the Japanese marque would make – a gift wrapper. Not just any gift wrapper; a gift wrapper designed with the Supra's camo wrap, just in time for Christmas.

That's right. The camo wrap's colors are integrated onto the wrapping paper, complete with the A90 chassis code to remind you that it's indeed patterned with the all-new Supra.

Now, if you think that this is just Toyota's marketing gimmick to hype up the sports car's arrival, you're wrong. The Supra camo wrappers are being sold to raise funds for the Crisis at Christmas charity program in the United Kingdom. Only 500 pieces of the 695mm x 1000mm (27.4 inches x 39.4 inches) sheet of wrapping paper will be sold, with a price tag of £5 ($6.29 at the current exchange rates) for four sheets of paper.

All proceeds will go to Crisis UK, the national charity for homeless people, to support its Crisis at Christmas program. You can buy the Supra camo wrapping paper from Toyota GB via CrowdFunder.co.uk.

The 2020 Toyota Supra will be officially revealed in January at the 2019 North American Auto Show in Detroit.

Toyota is helping raise funds for the Crisis at Christmas charity appeal with a special edition seasonal wrapping paper inspired by its all-new Supra sports car.

The paper, produced in a limited run of just 500 rolls, has the same camouflage body wrap design that has adorned the Supra prototype since its first appearance at the Goodwood Festival of Speed in the summer. The dazzle pattern features the red, white and black colours of Toyota Gazoo Racing and a subtle “A90” reference that enthusiasts will recognise as the new car’s chassis code.

The paper is available to buy now from Toyota GB via CrowdFunder.co.uk, here: http://fal.cn/SupraWrappingPaper.

The price is £5 for four sheets of paper (each sheet 695mm x 1000mm) with all profits going to Crisis UK, the national charity for homeless people, to support its Crisis at Christmas programme.

The all-new Toyota Supra is one of the most keenly anticipated new model introductions for 2019, marking the return of the most famous sports car name from Toyota’s sports car heritage. It has already provoked great excitement among motorists keen to experience a car that is focused purely on driving pleasure. Their appetite has been whetted by the car’s scene-stealing appearances in prototype form this year at the Geneva Motor Show and Goodwood Festival of Speed, and by glowing reviews from the first journalists to drive it.

Order reservations for the new Toyota Supra are being taken now through Toyota’s national consumer website, or through local Toyota retailer web pages, using the My Toyota app.