The Most Dangerous Toyota Prius Has An M61 Vulcan Cannon 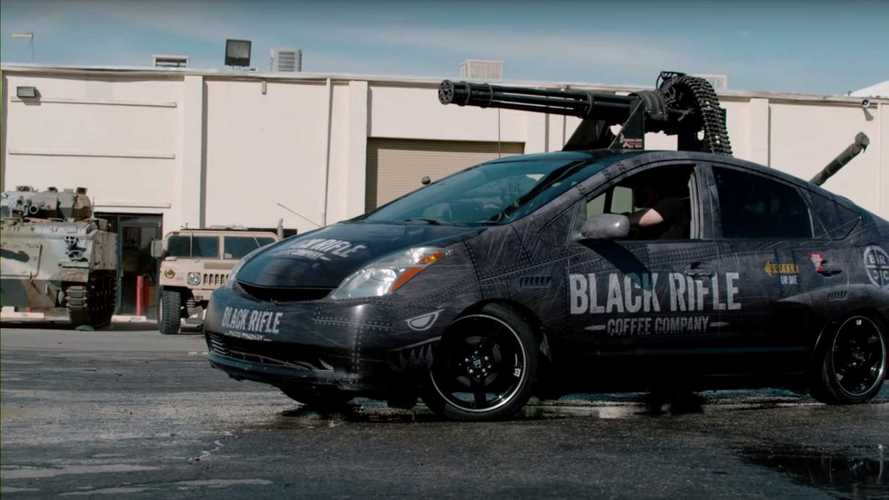 Who says war machines can't be friendly to the environment?

"Because Raptors are expensive."

True enough, when tasked to incorporate an M61 Vulcan – a rotary cannon that can shoot 6,600 rounds of 20-millimeter ammunition per minute – the first vehicles that would probably pop into your head are pickup trucks, specifically, the monstrous Ford F-150 Raptor. But coffee producer Black Rifle Coffee Company (BRCC) begs to differ and installed an M61 Vulcan into a Toyota Prius. Why? Refer to the quoted statement above.

But is it all-wheel drive?

BRCC's mental project took 160+ man hours to build, which include the removal of the car's interior to pave way for a roll cage "for various types of weaponry." Guess this Prius is up for any other heavy artillery in it.

Aside from obvious modification on the Prius, which somehow hid its environment-friendly nature under badass-looking wraps, BRCC also modified the way the M61 Vulcan works. Since the Prius is partly electric, BRCC made sure that the F16-sourced M61 Vulcan's firing would be initiated via electric primers. It also utilizes a linkless ammunition system, which converted its hydraulic system into electric.

These military vehicles don't have any heavy artillery to boot, but they're just as badass:

Mil-Spec's Baja Beast Hummer Is Ready To Roll Over Everything
⠀

We could only imagine the challenges faced by BRCC in making this project. Converting a Prius into a war machine was hard enough, let alone when you convert a high-powered artillery into an electric-powered weapon. Why? Because Raptors are expensive.

Watch the video below to see the most dangerous Toyota Prius in action: