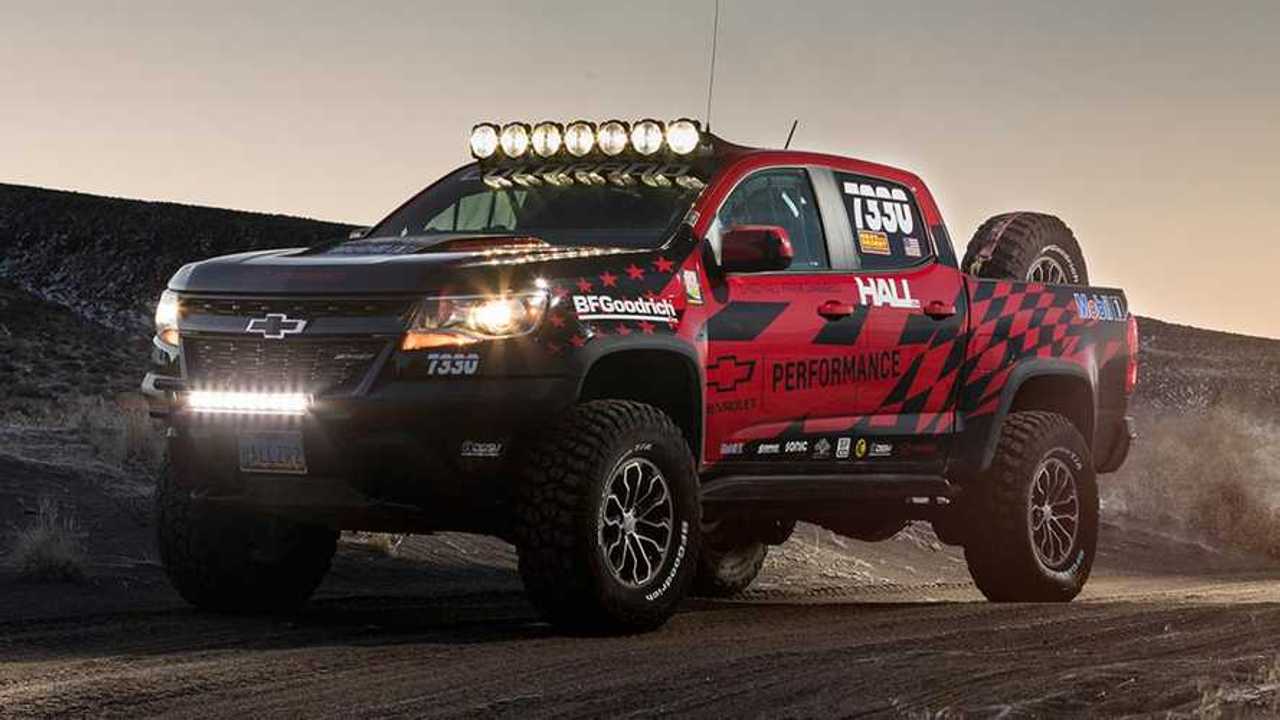 Chevrolet continues to make the Colorado midsize pickup into an even more hardcore off-roader. If the new ZR2 Bison is somehow too mild and a person doesn't mind compromising the truck's on-road comfort, Chevrolet Performance now launches a range of 15 racing components for turning the model into a powerhouse for overcoming rugged terrain.

“These parts can be purchased individually to suit each customer’s needs, or as a complete package,” said Mark Dickens, executive director of Chevrolet Performance Variants, Parts and Accessories and Motorsports, said in the announcement of the new pieces.

Chevy's racing parts largely focus on overhauling the Colorado's suspension. Among the pieces, there are revised Multimatic DSSV dampers. The set for the front axle cost $4,187.50, and they increase the travel by 15 percent over a Colorado ZR2. The ones for the rear are $4,000 and boost suspension travel by 10 percent.

For dealing with even more serious bumps, there are secondary shocks. These nitrogen-charged parts provide protection from bottoming out. They go for $1,231.25 at the front axle and $1,543.75 at the back. The upgrade also requires the $2,062.50 Jounce Striker/Leaf Spring Mount System that provide "the ideal touchdown location for the jounce shock and supports the axle tube at the point of contact."

To boost the ride height even more, there are a set of long-travel leaf springs for $3,312.50. The kit moves the rear axle so that the tires move through the center of the wheel wells. Rear ride height also increases by 1.18 inches (30 millimeters). With the long-travel DSSV shocks, there are an extra 11 inches (279.4 mm) of travel back there over a standard ZR2.

There are a couple drivetrain tweaks available, too. A $518.75 steel driveshaft offers greater clearance above obstacles. Chevy is still determining the price for a set of ball spline half shafts allow for greater articulation and reduce the feedback through the steering wheel during hard cornering.

Many of these parts are available now, and the rest are rolling out through 2019.

The parts were developed by Chevrolet Performance engineering in collaboration with Multimatic and Hall Racing. Renowned off-road driver Chad Hall competed in a Colorado ZR2 equipped with these components throughout 2017 and 2018 to develop and validate them in desert racing conditions. During that time, the team completed every mile of every race in the “Best in the Desert” series. Hall Racing also used the Colorado ZR2 to pre-run the grueling Baja 1000 race.

“Off-road racing is a brutal test of a vehicle, and especially its suspension components,” said Mark Dickens, executive director of Chevrolet Performance Variants, Parts and Accessories and Motorsports. “Over two years, Chad mercilessly pushed these ZR2 parts to the limit for the ultimate in development and validation.

“After seeing the success of the Colorado ZR2, customers have been hounding Chad for help building their own ‘Hall Racing ZR2,’” Dickens continued. “For the first time, you can buy the same Chevy Performance Parts that raced and won in the desert. All you need to add is the required safety equipment to build a pre-runner for scouting the Baja 1000 or a full-blown race truck capable of competing in the race itself.”

The production Colorado ZR2 is effectively a segment of one, combining the nimbleness and maneuverability of a midsize pickup with a host of new off-road features and the most off-road technology of any vehicle in its segment.

Compared to a standard Colorado, the ZR2 features front and rear tracks that have been widened by 3.5 inches and a suspension lifted by 2 inches. Functional rock sliders provide better performance over rocks and obstacles, and the front and rear bumpers have been modified for better off-road clearance.

While the stock ZR2 comes factory-equipped with “segment of one” capability for both low- and high-speed off-roading, these factory race parts focus on desert running while preserving low-speed off-road performance.

Some of their many benefits include an additional 1-inch suspension lift and a 1.5-inch Body Lift on top of the ZR2’s factory ride height and up to 15 percent more suspension travel for extreme high-speed off-roading.

Other components include front and rear jounce shocks to absorb large suspension inputs, using the same technology found on Trophy Trucks, and reinforced components including steel drive shafts, half shafts and tie rods.

“These parts can be purchased individually to suit each customer’s needs, or as a complete package,” said Dickens. “This gives customers the flexibility to build their truck up over time, purchase only the parts they need for their particular interest, or buy the complete set to build their own ‘Hall Racing’ ZR2.”

The parts* go on sale between now and early 2019 and will be available to Colorado ZR2 customers a la carte or as a complete package. For more information, visit: www.chevrolet.com/performance/colorado/off-road

Recommended: 1.5-inch Body Lift System (P/N 84429026) for optimal performance.
$1,218.75
ZR2 Jounce Striker/Leaf Spring Mount System
Engineered specifically for use with the Rear Jounce Shock System and to maximize performance of the Long Travel Leaf Spring System. The Jounce Striker/Leaf Spring Mount System reduces the clamp length of the leaf spring pack, reducing stress due to travel and load, increasing performance of the spring. This system is also engineered for the ideal touchdown location for the jounce shock and supports the axle tube at the point of contact.
Gas and Diesel
Required: for installing the Rear Jounce Shock System (P/N 84422546).

$237.50
ZR2 Rear Differential Cover
An aluminum cover, created for the 2017+ Colorado ZR2 models. The differential cover provides a robust mounting platform for the Anti-Wrap Bar System, and looks great doing it thanks to the clear anodized finish and unique Chevrolet Performance logo plate.
Gas and Diesel

$687.50
ZR2 Steel Driveshaft
Offers superior resistance to impact damage in off-road conditions. Designed for use on 2017+ Colorado ZR2 during extreme offroad and rock crawling events. This 3.5-inch diameter steel driveshaft allows for increased clearance over obstacles, has a maximum driveshaft speed of 5,000 RPM.
Gas and Diesel

*Line 22 off-road designated, intended but not limited to off-road use. Outfitting your vehicle will void any warranties related directly to vehicle features that they come into direct contact with.
**Not available for diesel Colorado ZR2 models.
***Tax and installation are extra cost.