SSC Tuatara Breaks Cover With Up To 1,750 Horsepower [UPDATE] 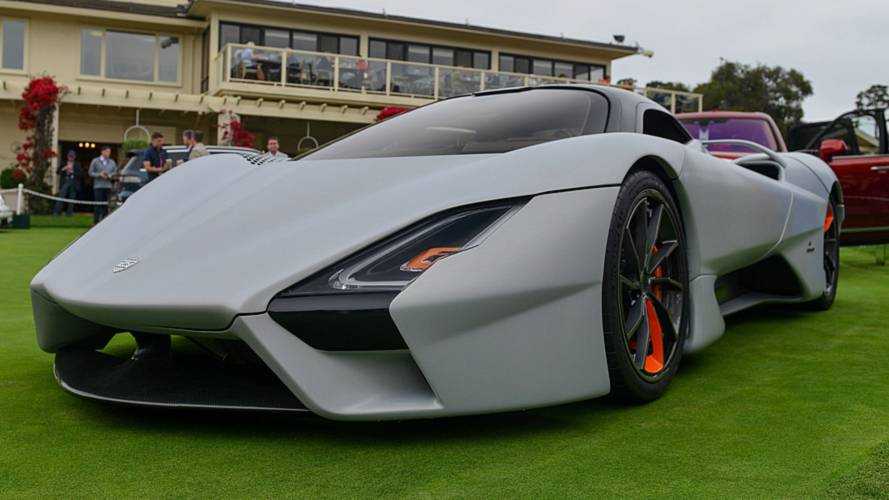 After years of waiting, it's finally here.

[UPDATE] SSC North America has contacted us to share a press release (attached at the end). The company says it's ready to start production of the Tuatara and is currently accepting orders, with only 100 cars to be made. These will be assembled at a new factory located at home in West Richland, Washington. The only information released about the hypercar's performance is its ability to exceed 300 mph (483 kph). SSC has "full confidence" it will hit that mark.

Formerly known as Shelby SuperCars, SSC North America has introduced this weekend at Pebble Beach the final version of its Tuatara hypercar, some seven years after presenting the concept. A press release hasn’t been issued yet, but all the juicy specs have been published on the company’s website from where we were able to source the adjacent images.

New videos are out!

SSC Tuatara Looks Like A Spaceship In Walkaround Video
⠀

Listen To The Twin-Turbo 5.9-Liter V8 Powering The SSC Tuatara

Without further ado, the twin-turbo 5.9-liter V8 produces 1,350 horsepower when feeding on premium unleaded and as much as 1,750 hp on flex fuel. The mid-mounted engine – which has a redline of 8,800 rpm - weighs 194 kilograms (428 pounds) and sends its output to the rear wheels through a seven-speed “computerized manual” gearbox featuring “robotic shift system.”

The high-performance coupe has a dry weight of just 2,750 pounds (1,247 kilograms) and an aerodynamically optimized body with a drag coefficient of just 0.279. To achieve that remarkably low weight, SSC used carbon fiber not just for the body and chassis, but even the wheels are made from carbon fiber. The 20-inch set comes wrapped in Michelin Pilot Sport Cup tires measuring 245/35 at the front axle and 345/25 for the rear wheels.

Named after a lizard-like reptile originating from New Zealand, The production-ready Tuatara is 174.4 inches (4.42 meters) long and comes with a wheelbase stretching at 105.2 inches (2.67 meters). According to the specs sheet, the hypercar is 78.4 inches (2 meters) wide and just 43 inches (1.1 meters) tall.

Details about performance are not available at the moment of writing, but we’re expecting it to be one of the fastest production cars ever made considering the high power, low weight, and extreme aero setup. It remains to be seen whether it will try and claim the record for the fastest street-legal car, which currently belongs to Koenigsegg and its 277.87-mph Agera RS.

The highly anticipated Tuatara was revealed to the public at the Pebble Beach Concours d'Elegance Press Conference at Peter Hay Hill. The American built hypercar was unveiled by Founder and CEO Jerod Shelby and world renowned designer Jason Castriota. Specific details about the meticulously engineered car were announced at the conference as it was unveiled.

With the final stages of testing and calibration of the Tuatara nearly complete, engine specifications were validated and released to the public.

The twin-turbo 5.9 liter V8 engine is a flat-plane crank configuration, designed by SSC North America and engineered and assembled in collaboration with Nelson Racing Engines. As engineering specifications are surpassed and verified, SSC has full confidence in the Tuatara's goal of exceeding 300 mph with a margin of error.

The all carbon fiber body and chassis not only give the Tuatara a lightweight structure, but boasts an unmatched hypercar drag coefficient of 0.279. Jason Castriota brought a timeless design to the Tuatara, inspired by the aerospace industry and producing superior aerodynamics with alluring curvatures.

Production of the SSC Tuatara is ready to begin, with pre-orders currently being secured by those who wish to own this next generation hypercar. Built in the new world-class production facility under construction in the company's hometown of West Richland, Washington, the Tuatara will be limited to a 100 unit production run.

SSC North America is proud to represent the American hypercar industry in the global market, as well as work with partners in the automotive industry that bring genuine ingenuity and passion to the project. Below are a list of our highly regarded partners that have had a vital role in the production of the SSC Tuatara.