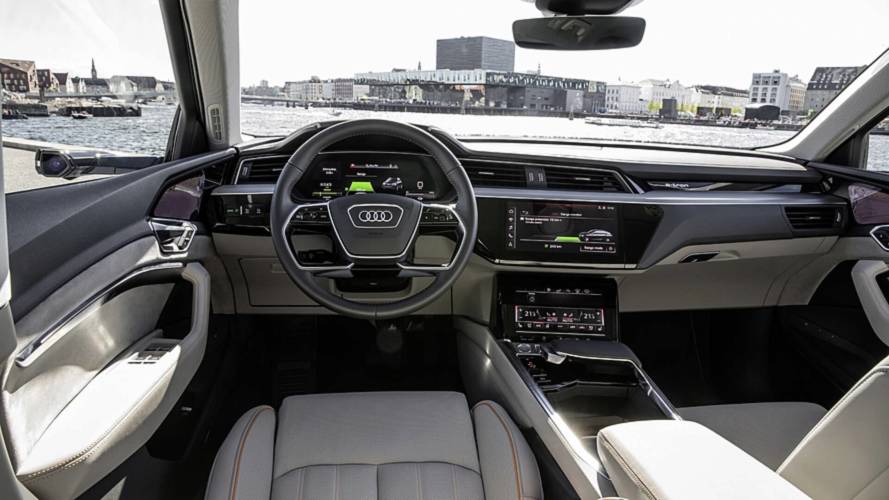 The virtual mirrors look nice, but in how many countries will these be legal?

You could say Audi has been teasing the E-Tron since September 2015 when the namesake concept debuted at the Frankfurt Motor Show. Now, nearly three years later, the production version is still a no-show, but at least today we’re finally able to have a look inside the cabin of the road-going model. Bear in mind Audi refers to this vehicle as a prototype, but expect the production version to be virtually the same and feature air suspension as standard.

And speaking of “virtually,” gone are the conventional side mirrors since these have been replaced by cameras for what Audi describes as being virtual mirrors. Those were initially shown at the end of May, but now we get to see the other important component of the equipment – the small screens mounted on the top-right corner of the door panel.

It will probably take a little bit of time getting used to the seven-inch OLED screens positioned right below the windows, but these will bring some advantages over conventional mirrors. The driver will be able to zoom in and out, as well as select from one of the three pre-programmed settings that will adjust the virtual mirrors for parking, turning, and for highway driving. It goes without saying blind spot functionality has been incorporated in these digital displays.

Discover more about the E-Tron:

The OLED pair has increased the number of screens to five if we include the fully digital instrument cluster, the infotainment system, and the touchscreen mounted lower on the center console for the climate control settings as seen in high-end Audis like the A8, Q8, A7, and A6.

At the heart of the Audi E-Tron will be a pair of electric motors providing a combined output of 355 horsepower (265 kilowatts) for a sprint to 62 mph (100 kph) in less than 6 seconds and a top speed of about 200 kph (124 mph). Using the automatic transmission selector to enable Sport mode will offer a temporary maximum power of 402 hp (300 kW).

The Belgium-built electric crossover will rely on a 95-kWh battery with enough juice for approximately 400 km (248.5 miles) in the WLTP cycle, which will be possible partly thanks to the E-Tron’s aerodynamic body with a drag coefficient of just 0.28. The low Cd number was achieved by replacing the bulky mirrors with the tiny cameras, thus making the vehicle narrower by 15 centimeters (5.9 inches). These virtual mirrors will be offered as optional equipment, but won’t be legal all over the world. However, Audi mentions it’s in talks with the right people to make them legal globally.

Getting back to the batteries, using a 150-kW high-voltage charger will “fill up” the pack in just 30 minutes while with a 400-volt three-phase outlet it will take approximately 8 hours and 30 minutes.

2019 Audi E-Tron Caught Torturing Its Tires At The Nürburgring

The interior cabin will provide a generous amount of space for five occupants thanks to a long wheelbase stretching at 2,928 millimeters (9.6 feet). Being an EV, it means there’s no center tunnel, so rear passengers get to enjoy more legroom compared to a conventionally powered vehicle. On the entertainment front, there will be an optional Bang & Olufsen sound system with 16 loudspeakers and an amplifier pumping out 705 watts of power.

As a final note, the E-Tron was supposed to debut on August 30 in Brussels, but company CEO Rupert Stadler was arrested, forcing Audi to postpone the official premiere. It’s not known at this point when the Jaguar I-Pace and Mercedes EQ C rival will be revealed, but the event is expected to take place in the United States later this year. Market launch won’t be affected by this setback, so customer deliveries are still on track for early 2019. A sleeker E-Tron Sportback will arrive before the end of the decade and will also be built in Brussels, with a stylish E-Tron GT to be launched later and produced in Germany.

Chill out: Audi e-tron prototype alone on the big stage

Driver and passengers experience their surroundings in a whole new dimension in the Audi e-tron prototype. In addition to its generous space and the stylishly reduced design, Audi’s first electric car offers a high level of calm and, in turn, the perfect stage for the Bang &amp; Olufsen 3D Premium Sound System. The full-size SUV also provides a new digital operating and display experience. It is the first volume-production car with virtual exterior mirrors.

The scenario: big stage for the Audi e-tron prototype
In the Royal Danish Playhouse in Copenhagen, the brand with the four rings is showcasing the interior of the Audi e-tronprototype for the first time. Where actors and performers normally appear in front of an audience of up to 650 people, the bright spotlight is now focused on the all-electric powered full-size SUV. Still wrapped in its specific e-troncamouflage, the Audi e-tron prototype demonstrates its versatile interior design to the public – with the lightness of a ballet dancer, the intelligence of a character actor and the performance of an opera singer. Like a concert hall, the electric SUV also offers a pure sound experience, pampering its driver and the passengers as an option with the 3D sound of the Bang & Olufsen Premium Sound System. This system reproduces the music precisely how it was recorded – without any artificial effects. All thanks to 16 loudspeakers and an amplifier delivering up to 705 watts of power.

Cubist design language and virtual exterior mirrors: the interior design
The stage in the interior of the Audi e-tron prototype forms a large arc, the wraparound. It envelops the extensive instrument panel with pronounced horizontal lines as far round as the sculptural door trims. It incorporates harmoniously the hood above the standard Audi virtual cockpit whose sleek display stands visually free in the space, as well as the displays of the optional virtual exterior mirrors. These mirrors will be making their world premiere in the volume-production version of the Audi e-tron prototype, taking in-car digitization to a whole new level.

The virtual exterior mirrors not only provide a new technology experience, but also many practical benefits in terms of comfort and safety. Their flat support integrates a small camera whose image is digitally processed and shown on high-contrast 7-inch OLED displays in the interior. The driver can enter different settings using the touchscreen function. The image detail can be moved, providing the required field of vision, while the user can also zoom in and out of the image. The driver can choose from three views in the MMI system for different situations – for highway driving, for turning and for parking.

Another eye-catching feature in the interior is the center tunnel console which rests on open sidewalls. The hand rest with integrated gear change lever appears to float above the console. Lightness and performance are fused into one. The entire driver’s area is focused squarely on the driver.

Electrification brought to life: materials and workmanship
In every equipment line, the interior of the Audi e-tron prototype presents carefully coordinated upholstery materials, colors and inlays. Whether refined Valcona leather or dark brushed aluminum for a sporty look, the electric SUV meets the highest quality standards in terms of craftsmanship and choice of materials. The stitching on the seats creates a motif reminiscent of electric circuit boards. As an option, contrasting stitching and piping in orange stand out brightly – taking their cue from the high-voltage electrical system. The optional contour/ambient lighting package illuminates the surfaces subtly and traces precisely the interior’s basic lines. The e-tron badge in the instrument panel is also backlit.

Ample space for five occupants: spaciousness
With its long wheelbase of 2,928 millimeters (9.6 ft), the Audi e-tron prototype has ample space for five occupants and their bags. Interior length, head room in front and rear as well as knee room in the second seat row are top-class in the full-size SUV segment. In the rear, a flat plateau – instead of the center tunnel usually found in conventional models – creates additional space.

Almost perfect: the sense of calm onboard
With its combination of electric drive and a comfortable, sophisticated interior, the Audi e-tron prototype creates a new sense of mobility. Especially when driving in the city, it radiates an almost perfect sense of calm. The only sounds are from its tires and the gentle hum of the electric motors. The acoustic comfort is one of the strengths of all Audi models. The Audi e-tron prototype raises this level even further, thus offering outstanding long-distance comfort. Its body has special soundproofing and sealing in all zones that could transmit noise interference. The wind noise, which dominates the acoustic perception at speeds from around 85 km/h (52.8 mph), barely gets through to the occupants. As such, the passengers can talk to each other comfortably even at high speeds.