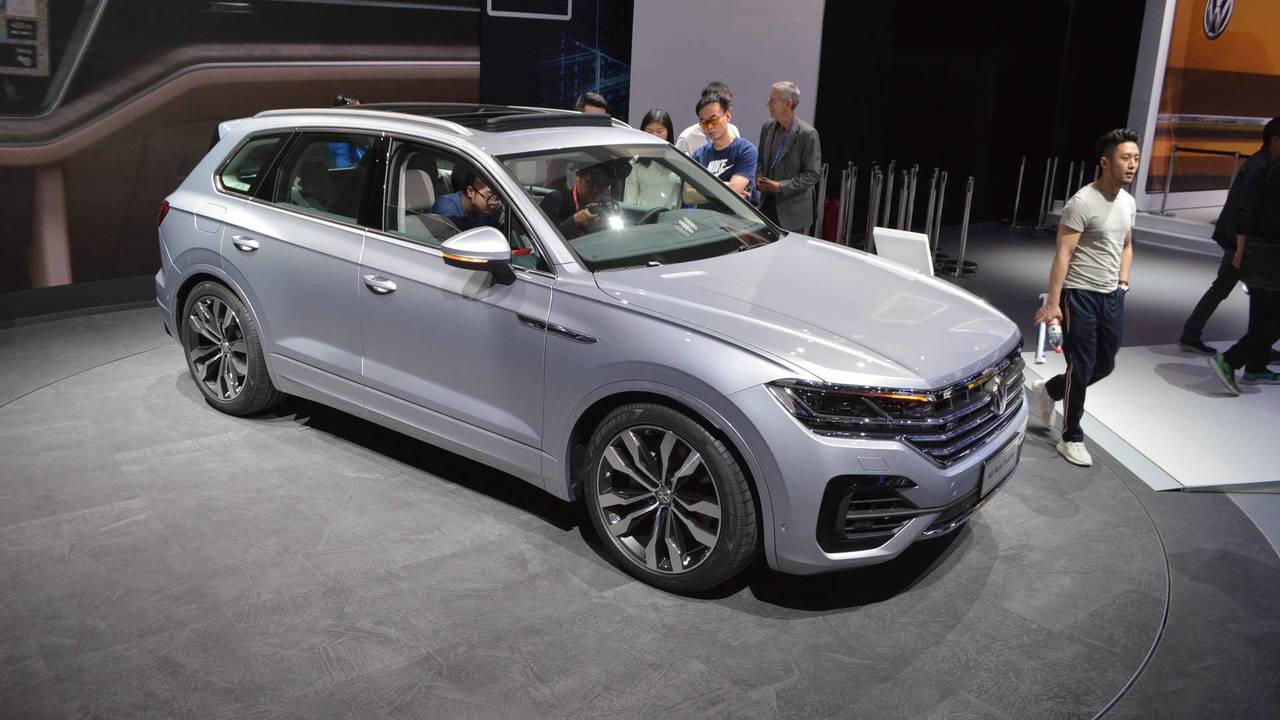 The most technologically advanced Volkswagen has arrived, complete with a 15-inch touchscreen.

After a painstakingly long teaser campaign and a plethora of spy shots, the completely new Volkswagen Touareg has finally been revealed as the tech-laden SUV you won’t be able to buy in the United States. For the markets where the third generation will be available – including Europe where it’s going to serve as the company’s flagship – the 2019 Touareg will try to lure in buyers by setting the bar higher for near-premium SUVs.

Even though its footprint has increased, switching to new underpinnings has slashed a significant 106 kilograms (234 pounds) thanks to a mix of materials consisting of aluminum (48 percent) and what VW describes as being “high-tech steels” (52 percent).

When it comes to styling, the new Touareg adopts a completely redesigned front fascia mirroring the appearance of the Arteon with the headlights “connected” to the grille. The new look lends the posh SUV a somewhat bold and imposing presence that makes it stand out from the growing crop of high-riding VWs.

Those aren’t any ordinary full-LED headlights as they’re of the matrix type and are billed as being one of the most advanced in the business. There are no fewer than 128 LEDs per headlight that can be individually activated and VW is confident to say these are powerful enough “to make night-time bright as day.”

The back of the vehicle hasn’t gone through the same level of changes as the front fascia considering it’s more of an evolution rather than a revolution compared to the outgoing Touareg. As it’s the case with the aforementioned Arteon, the model’s name is prominently featured in the center of the trunk lid and is flanked by the LED taillights.

Moving on to the side profile, the first thing you’ll probably notice will be the upper character line running above the door handles from front to back. There’s also a tiny fixed glass area near the A-pillars to further emphasize the Touareg’s increased proportions. Even the base model will get 18-inch wheels, up by a size compared to the previous generation, while the high-end versions are going to ride on massive 21-inch alloys.

While the exterior might not blow you away, the interior is where the magic has happened. The upper-spec versions of the 2019 Touareg will combine a fully digital 12-inch instrument cluster with a massive 15-inch touchscreen making its debut on a production model from Wolfsburg. VW had to move the air vents very low on the center console to make room for the gigantic display, which you can imagine will incorporate the vast majority of the functions since there are very few physical controls.

If you’re a fan of tech-heavy SUVs, you’ll love the Touareg. It has everything from all-wheel steering to a night vision system. Many of these goodies will come at an additional cost, including four-corner air suspension (with electronic damping control), massaging and ventilated front seats, four-zone air conditioning, a 730-watt, 14-speaker Dynaudio sound system, and the biggest panoramic sliding roof you’ll find in a VW.

As for engines, the 2019 Touareg will be launched in Europe with a pair of turbocharged 3.0-liter V6 diesels rated at 231 horsepower (170 kilowatts) and 286 hp (210 kW). Later this fall, a gasoline-fed V6 will join the lineup with 340 hp (250 kW) on tap. Sitting on top of the range will eventually be a beefier 4.0-liter V8 diesel with 421 hp (310 kW) and probably a mountain-moving amount of torque. China will get a thrifty plug-in hybrid powertrain with a combined output of 367 hp (270 kW), which is also bound to hit the European market at a yet undisclosed date.

The third-gen Touareg has some big shoes to fill considering combined sales of its predecessors have reached close to one million units. VW is moving the large SUV further upmarket by cramming every possible tech the VW core brand has to offer at the moment, much like it did with the Phaeton back in the day.

Volkswagen is making a statement by staging a world premiere of a new model for the first time in China – its largest market. The new Touareg1 marks a milestone in the brand's largest model and technology campaign, and it shows what engineers and designers at Volkswagen can do. The new flagship takes a top position in the premium class SUV segment with its expressive design, its innovative operating, convenience and safety systems, as well as in the high quality of its materials and craftsmanship.

Equipped with the connectivity of a new era and a pioneering fusion of assistance, comfort, lighting and infotainment systems, the Touareg points the way to the future. At the same time, the exclusive SUV charges up its market segment with pure dynamism. The largest markets for what is now the third generation of the Touareg are China, Europe and Russia. Worldwide sales of the previous two generations amount to nearly one million units. The Touareg – as comfortable as it is dynamic – has, as the most technically advanced Volkswagen of its era, the potential to enthuse technology and design savvy drivers of premium class models of all sorts, reaching new target groups as well.

Premiere of the Innovision Cockpit. Volkswagen is presenting the fully digitalised Innovision Cockpit for the first time in the new Touareg. Here the digital instruments (Digital Cockpit with 12-inch display) and the top Discover Premium infotainment system (with 15-inch display) merge to form a digital operating, information, communication and entertainment unit that hardly needs any conventional buttons or switches. Always-on, offering intuitive control and maximum personalisation – with the Innovision Cockpit, the Touareg provides the blueprint for tomorrow's digital interior today.

A focus on people. Drivers use the Innovision Cockpit to adapt the assistance, handling and comfort systems specifically to their personal tastes; the car becomes 'their' Touareg. This opens up a world in which the driver and on-board guests no longer have to adapt to the car; rather the car adapts to them. Like a new smartphone, the Volkswagen is set up and tuned to personal needs. This is made possible by a new high level of connected systems and programmes – controlled via digital interfaces and the multifunction steering wheel.

Fusion of new assistance, handling and comfort systems. The Touareg is launching with the largest range of assistance, handling and comfort systems ever to be integrated into a Volkswagen. They include technologies such as the Night Vision assistance system (detects people and animals in darkness via a thermal imaging camera), Roadwork Lane Assist (semi-automated steering and lane keeping, accelerating and braking up to 60 km/h), Front Cross Traffic Assist (reacts to cross traffic in front of the Touareg), active all-wheel steering (makes the Touareg handle like a compact car), new roll stabilisation with electromechanically controlled anti-roll bars, 'IQ.Light – LED matrix headlights' (interactive, camera-based dipped and main beam headlight control) and a 'Windshield Head-up Display' projected directly onto the windscreen.

The driver experiences these systems as a single unit in the new Touareg. They are simply there – interconnected via a new central control unit – working imperceptibly in the background and making travel safer, more convenient and more intuitive than ever.

New dimensions and reduced weight. Compared to its predecessor, the third generation Touareg is moderately wider and longer. The new dimensions have positive effects on both the vehicle's proportions and its amount of interior space. The added exterior length leads, for example, to a significant increase in luggage capacity, from 697 to 810 litres (with rear bench seat up). Cargo there is hidden from onlookers by an optional electrically extending and retracting luggage compartment cover. Despite its increased length and width, the car body is 106 kg lighter because of its mixed material construction of aluminium (48 per cent) and high-tech steels (52 per cent).

Volkswagen SUV campaign. The 2018 Touareg is an important milestone in the largest product and technology campaign in the history of the Volkswagen brand. The brand's range of SUVs is also being expanded comprehensively. It currently consists of the new T-Roc, the Tiguan, the new Tiguan Allspace (Europe) and Tiguan L (China), the new Atlas (USA) and the Teramont (China), plus the now completely redesigned Touareg as Volkswagen's top SUV model. Volkswagen will also be further extending the lower end of its SUV range with the compact T-Cross. The first all-electric SUV from Volkswagen is also a sure thing: the I.D. CROZZ. It will arrive on the market in 2020.