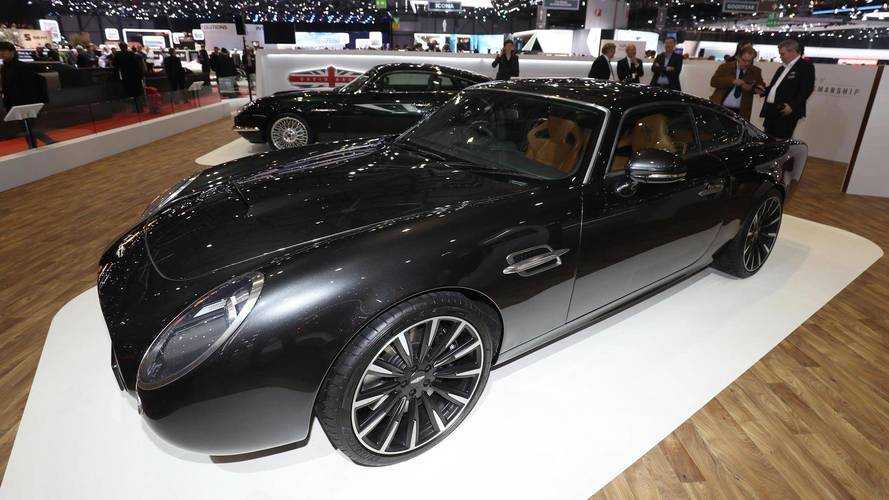 David Brown Automotive, the “leader in British coachbuilding and handcraftsmanship,” has just revealed the Speedback Silverstone Edition in Geneva, a “pure performance Grand Tourer” for the XXI century. Its production will be capped at only 10 examples, all of which will be hand built at the company’s headquarters and build facility in Silverstone.

Speaking of the legendary Silverstone village, David Brown’s new model celebrates the anniversary of the manufacturer’s relocation of its HQ at the historic racing venue. The model is inspired by the grand tourers and race cars of the late 1960s, but under the skin is a modern 5.0-liter V8 twin-scroll supercharged V8 engine.

“Ever since David Brown Automotive relocated to Silverstone, we have wanted to mark the significance of the circuit’s aeronautical and motorsport heritage,” David Brown, company founder, CEO, and ideologist, comments. “Speedback Silverstone Edition addresses our ambition on every level, as a visually stunning Grand Tourer and the most performance-focused model we have ever made.”

The 601-horsepower (448-kilowatt), 565-pound feet (766-Newton-meter) motor accelerates the sexy coupe from a standstill to 60 miles per hour (0-96 kilometers per hour) in 4.2 seconds, making it, as mentioned above, “the most performance orientated car” ever produced by the automaker. David Brown Automotive remains faithful to the classic RWD idea, as the V8, mated to a six-speed ZF automatic gearbox, sends the power exclusively to the rear wheels.

Take a virtual step inside the cabin and you’ll find a sixties-inspired atmosphere, dominated by brown and black leather, covering the seats and dashboard. There’s no second row of seats, as this area is used as a luggage storage space. The center console is home to a fully-integrated infotainment system with features such as a satellite navigation, Bluetooth connectivity, and a 7.1-channel Bowers & Wilkins premium surround sound audio system.

The Speedback Silverstone Edition will be built to order, in either left-hand or right-hand drive configurations, with prices starting at £620,000, or approximately $862,000 at the current exchange rates.

Limited to a run of only 10 production cars, Speedback Silverstone Edition is an example of bespoke British handcraftsmanship. Each model will be made using traditional coachbuilding techniques at David Brown Automotive’s headquarters and build facility in Silverstone, the home of the iconic racing circuit. Celebrating one year since David Brown Automotive moved to its Silverstone base, the new model is honed for performance, drawing close links to the aeronautical and racing heritage of the celebrated circuit.

Delivering 601 horsepower with 565ft lb of torque, a 0-60mph time of 4.2 seconds and a limited top speed of 155mph, the 5.0-litre twin-scroll supercharged V8 engine fitted to the new model makes for the most performance orientated car ever produced by David Brown Automotive. The impressive powertrain is mated to a six-speed ZF automatic transmission and drive is delivered through the Grand Tourer’s rear wheels for assured sports handling.

The aeronautical- and classic racing-inspired theme is clear in the visual identity of Speedback Silverstone Edition, building on the unique design language found only in each car handmade by David Brown Automotive. The handcrafted aluminium body is streamlined with extended side skirts, a front spoiler and enhanced rear diffuser, while larger side vents – badged with limited edition Silverstone Edition details – hint to the performance-enhanced powertrain beneath. Jet-inspired exhaust tips compound the race-tuned engine note and compliment the car’s performance characteristics.

Inside the cockpit, a Sixties-inspired, exquisitely brogued and embroidered interior trim befits the essence of a performance Grand Tourer. The ‘Antique’ and ‘Ebony’ leather hides are bound by contrasting tan stitching, and the Kvadrat® ‘Remix’ premium fabric further adds to the quality and aeronautical personality within the cabin. An open-pore, scorched ‘Ebony Macassar’ wood veneer finish fades rearward, with metal inlay completing the dashboard, which features jet-inspired air vents to pay homage to the aeronautical and racing past of the Silverstone Circuit.

The two-seater configuration – with rear luggage storage space in the place of rear seats – features heated and adjustable sports seats that are adorned with a stylised Silverstone Circuit outline embroidered into the tan leather. Like Speedback GT, the folding ‘event seat’ features prominently at the rear of the car with an additional bespoke stowage feature. The application of leather and Alcantara® extends to the steering wheel, also fitted with bespoke brushed aluminium switchgear.

A brushed chrome finish is prominent around the interior. Exclusive aeronautical-inspired speedometer and tachometer dials perpetuate the legacy of Speedback Silverstone Edition, while a fully integrated infotainment system is another proponent to position the car as a classically styled, performance Grand Tourer in the modern age. The in-car technology package includes satellite navigation, Bluetooth® connectivity and a 7.1-channel Bowers & Wilkins® surround sound audio system.

“Ever since David Brown Automotive relocated to Silverstone, we have wanted to mark the significance of the circuit’s aeronautical and motorsport heritage,” said David Brown, company founder and CEO. “Speedback Silverstone Edition addresses our ambition on every level, as a visually stunning Grand Tourer and the most performance-focused model we have ever made.

“We have developed Speedback Silverstone Edition to appeal to a new customer; the driver who wants the very best in performance at all times, but still wants to retain usability and driveability in an exclusive model which still offers both comfort and luxury. The David Brown Automotive DNA is clear to see again, building on the success of Speedback GT and Mini Remastered models, while our inspiration from the heritage of the Silverstone Circuit shapes this new model as a classically-inspired performance Grand Tourer for the modern market.”

If you have any specific enquiries on the car and its launch, please speak to the PR contacts listed below.