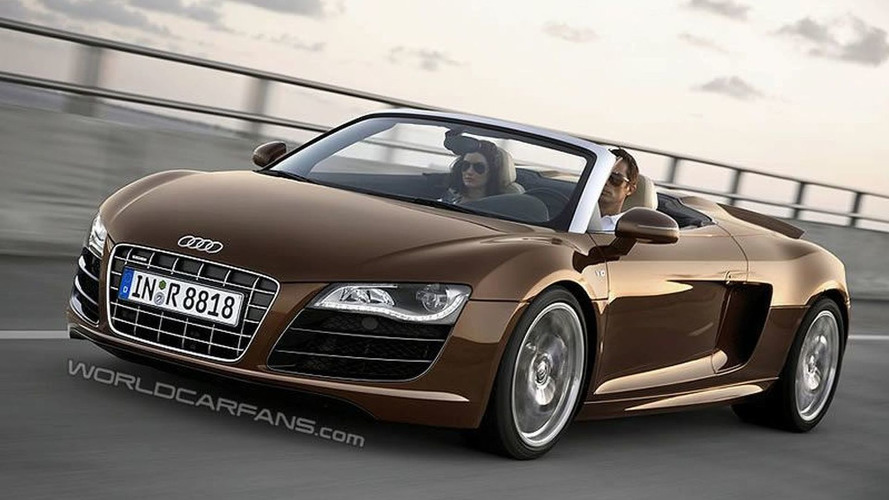 Official Audi R8 Spider pictures have been leaked just less than a week before the car's media presentation at Frankfurt. Unfortunately the roof is down so we can't see what it looks like when covered. Hopefully more leaks happen before next week.

It's no secret that Audi is unveiling the R8 Spider at the Frankfurt Motor Show next week. Neither are these leaked pictures showing the car mostly jazzing around with two happy occupants. In addition to recent paparazzi shots of the car taken during the filming of Ironman 2 - Electric Boogaloo, spy photos revealed a black canvass roof whose mechanisms hid the mid-rear mounted engine. We'd be quite interested to see how said roof is operated.

The front end has the powerful grille with surrounding LED daytime running lights while the rear features LED rear lights, two oval tailpipes that are visible from the sides and a massive diffuser.

Audi plans to launch the R8 Spider with only the 5.2-litre V10 engine as its symphony of thrust. It produces 386kW (525hp) and peak torque of 530Nm. The transmission options are the 6-speed manual and the R Tronic sequential shifter. Power is shared along the two axles through the quattro AWD system which, if the same as the coupe's, can transfer up to 85% of torque to the rear wheels. Rumours say there won't be a 4.2-litre Spider but there may be an electric-powered one.