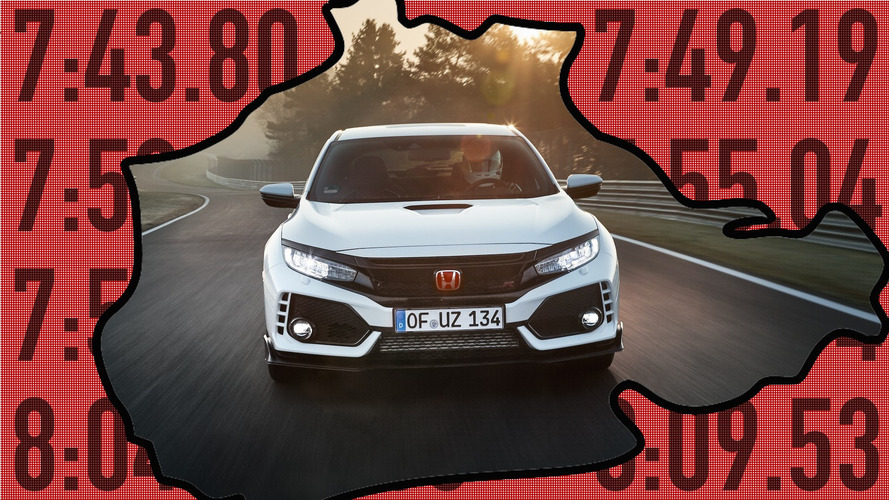 Nürburgring lap times can be controversial – just ask the folks at Lamborghini – but they remain one of the best ways of judging a sports car’s overall performance. That’s why Honda was so eager to promote the fact that its new Civic Type R can hustle around Germany’s so-called Green Hell in just 7 minutes and 43.8 seconds. That’s quick. And to show you just how quick, here’s a look at just a few of the many, many cars that the Civic Type R would beat, based purely on quoted lap times. It’s a good reminder that a track like the Nordschleife, there’s more to setting a fast time than just horsepower.

7:47.19 – Volkswagen Golf GTI Clubsport S
The limited-edition Clubsport S first set an impressive 7:49.21 lap time, then VW went back later for another go. This is an impressive time and was, until the Civic Type R came along, the record for a production front-wheel-drive car at the ‘Ring.

7:50.63 – Honda Civic Type R (outgoing model)
The old Type R, which was introduced in 2015, was already a scorcher at the Green Hell. But unsurprisingly, the new car is quicker – by a full seven seconds, impressive progress for the hot hatch.

7:56 – Chevrolet Corvette Z06 (C5)
When the 2004 Corvette Z06 snuck under the eight-minute mark at the ‘Ring, it was big news. According to Chevy, it was the first production car to break that barrier. More than a decade later, of course, Chevrolet performance cars have far eclipsed those figures. The 2013 Corvette ZR1 did the deed in 7:13, and the latest Camaro ZL1 managed a lap in 7:29.6.

7:58 – BMW M2
Our favorite new BMW M car in years is still a joy, but it’s not quick enough to keep up the Civic Type R. That said, the M2 is in good company, and we’re never going to give up a chance to get behind the wheel just because it’s a few seconds slower than a Honda.

7:59:00 – Alfa Romeo Stelvio Quadrifoglio
This one comes with an asterisk, because Alfa is simply promising that its 505-hp Stelvio will, at some point, beat the Porsche Cayenne Turbo S (see below) and turn in a 7:59.00 lap on the ‘Ring. The Giulia Quadrifoglio, by the way, which has the same powertrain, lapped the ‘Ring in an impressive 7:32.

7:59.74 – Porsche Cayenne Turbo S
Until Alfa’s Stelvio actually sets its lap time, this 570-hp Porsche holds the record for fastest production SUV lap time. Not that we’re surprised it’s quick, given both its prodigious power output and Porsche’s ability to make high-performance vehicles. But come on, it weighs 4,927 pounds and can tow 7,716 pounds – that’s impressive.

8:04 – Alfa Romeo 4C
A mid-engine, carbon-fiber sports car is no match for the Honda, it turns out. The 4C’s 8:04 time is very impressive for a car with “just” 237 hp on tap from its 1.7-liter turbocharged inline-four, but it’s not enough to keep pace with the raciest new Civic.

8:06 – Ford Focus RS
Another asterisk here: Ford hasn’t shared an official Focus RS ‘Ring time, but the talented testers from Germany’s Auto Sport managed to hustle a factory-stock Ford Focus RS to a time of 8:06. That’s way behind the Civic Type R, despite the RS having four drive wheels instead of two.

8:14 – Land Rover Range Rover Sport SVR
So close to the Porsche Cayenne, the Range Rover Sport SVR’s lap time is nonetheless hugely impressive. There 550 hp up front, courtesy of a supercharged 5.0-liter V8 engine, yet the SVR still retains Land Rover-specific abilities, like being able to ford 33.5 inches of water. It’ll be perfect if there’s ever a flood at the Nürburgring.