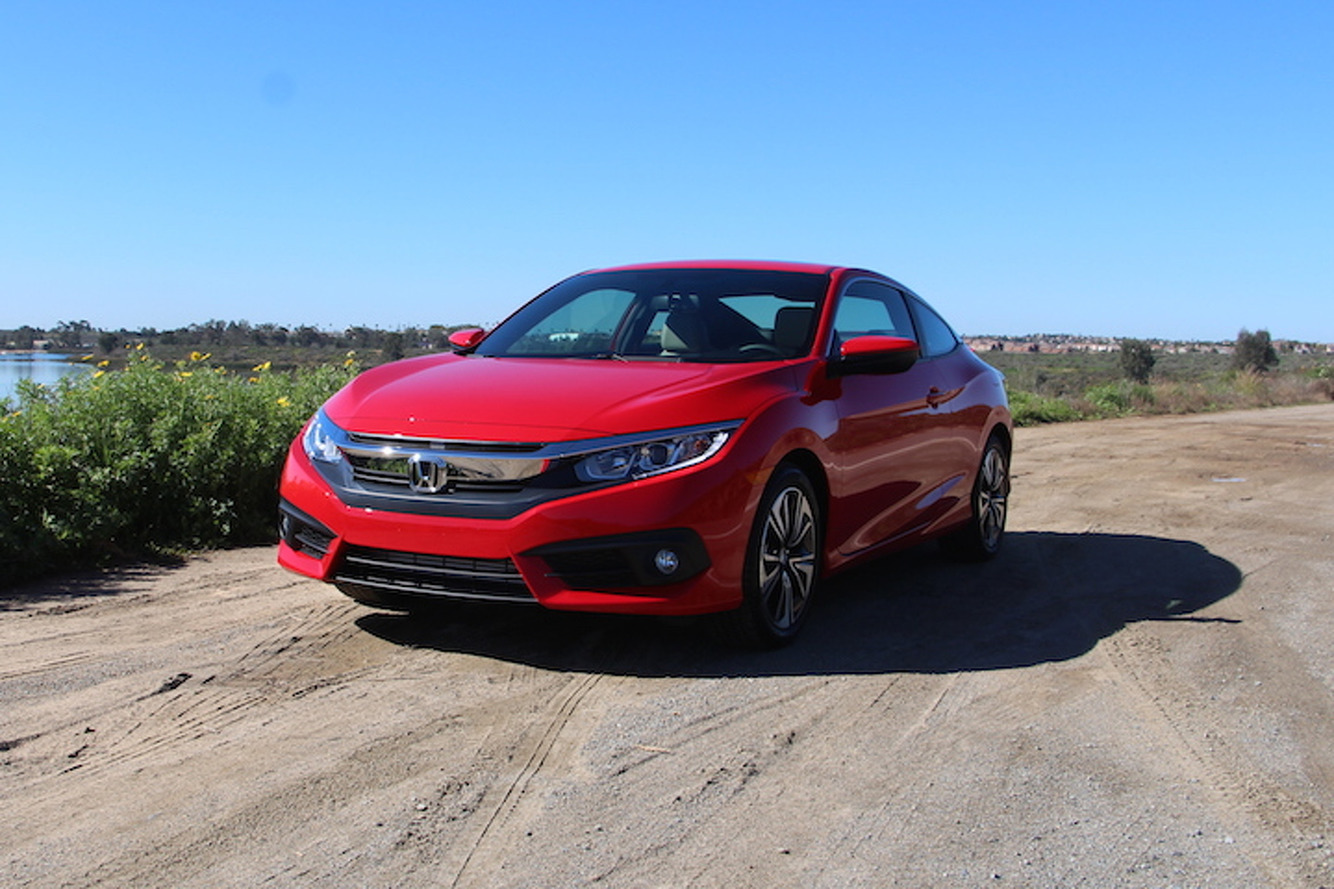 What draws someone to buy a Honda Civic Coupe? If you're a Honda exec, that's quite literally a million dollar question. In 2015, the coupe made up around 12% of sales. Considering the last generation Civic was...less than stellar, that's actually not bad. But where does Honda go from there?

For Honda, the new Civic coupe is a natural progression from its already hugely successful Civic sedan. And Honda believes its two-door version ticks all the right boxes for consumers—specifically young consumers—whatever those boxes may be (looks, sporty driving, etc). But can the early success of the sedan carry over into something relatively less practical, and slightly sportier? Well, let's see.

Lasting Looks There's nothing dramatic about the look of the new Civic; it's simple, it's clean. Using the same simplistic styling you'll find throughout the rest of the lineup, the Coupe progresses handsomely sans two extra doors. The lack of 'dramatics' were done on purpose by Honda designers, proving the marque's commitment to longevity not only in engineering, but also design. The most distinguishable feature of the new Civic being the taillights and rear styling. Honda wanted to make sure that you'll be able to notice the new Civic from the back night and day, similar to the way Dodge redesigned the Charger. Truth be told, it almost sort of resembles a smaller, better looking Accord Crosstour (don't tell Honda I said that).

Sporty and Spacious The two-door design might worry some of you looking for interior room—though, it shouldn't. The back seat is well beyond comfortable enough for two normal-sized human beings. My six-foot frame was superbly more comfortable in the Civic than in some of the other small coupes you'll find. Entering and exiting from the driver side makes life difficult with the lack of a rear-access lever. Thankfully the same can't be said about the passenger side. One push of the lever and the seat moves up instantaneously with more than enough room to get in easily without having to contort your limbs. Honda's guess is that if you're buying a coupe, you're probably not the type of person to be regularly chauffeuring around friends, relatives, or large reptiles anyways. The lack of a driver-side access lever, Honda assures us, is also a safety feature. Sensible. Annoying, but sensible.

There's not much more praise we can give the interior of the Civic that we already haven't. It's one of the best interior layouts money can buy. Apple CarPlay, thoughtful compartments—it's just damn good, or as one engineer called it, "smarter than an Oxford honors student." The one niggle we have to point out from the sedan to coupe transfer is the significantly reduced visibility. It seems like the center mirror takes up 25% of your vision, and the windshield has been chopped more than some people might like.

Drives Like a Civic (Which is Good) If you haven't had the chance, I suggest you drive the Civic sedan. It makes the Mazda 3 feel like a semi-truck comparatively. I'm telling you this because if you've driven the sedan...you pretty much know what to expect in the coupe. The steering rack feels slightly tighter, the nimble and aggressive driving experience carries over from its four-door sibling, but doesn't add any extra oomph. It's still a very fun vehicle to drive, and reassures Honda's commitment to performance—even in this segment—but you'll have to wait until the Si for a more fun coupe. Just like the sedan, there's a 2.0-liter 4-cylinder and a 1.5-liter turbo. I can't in good conscious tell you to buy the 2.0-liter because the 1.5 is just so much better (and faster). The larger 2.0-liter only pushes out 158 horsepower, while the smaller and more efficient 1.5 is able to produce 174 horsepower and up to 41 mpg, says Honda.

The Verdict While the affordable coupe segment seems to be slowing down, Honda's train of success can't be stopped. The Civic Coupe is definitely a good vehicle, and it's probably going to be one of the most successful coupes Honda has ever built. The aesthetics alone will draw in young buyers, while the addition of Apple CarPlay and a superbly laid out interior will keep them hooked. Problem is, we can't figure out why you'd want one over the sedan... Specs Engine: 2.0L 4-Cylinder / 1.5L 4-Cylinder Horsepower: 158 / 174 MPG: 34 / 35 (combined) Price (est): $19,000 Positives Handsome, subtle design Well thought out, spacious interior Affordable Negatives Sedan is too good Photo Credit: Jeff Perez for BoldRide Follow @notaboatcaptain