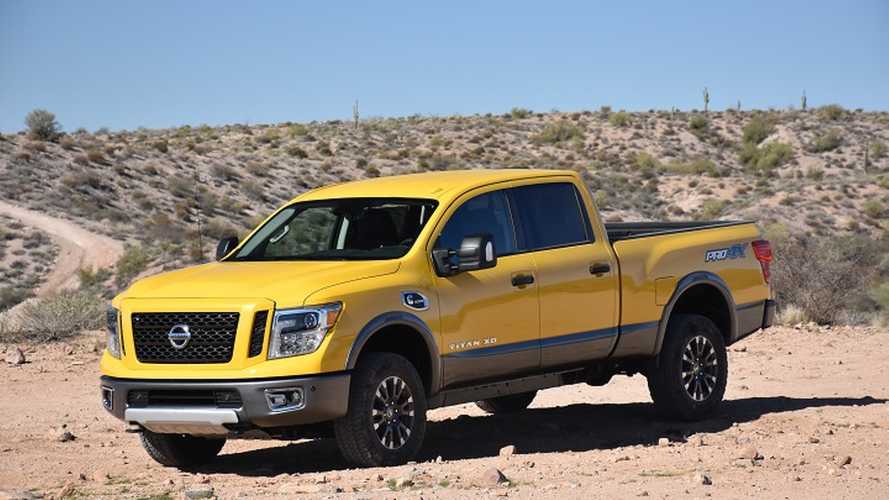 That’s essentially what Nissan did with the new Titan XD pickup. It’s not exactly a Ford F-150 competitor, nor is it a threat to the larger F-250—it’s smack dab somewhere in the middle of the two. But unlike the fable told above, we’re not sure there’s actually a Goldilocks out there that thinks the Titan XD is "just right."

Cummins To The Rescue? The Nissan Titan has never made a real impact within the truck community. It’s an outlier, a truck that tries to carve out a small niche among the massive sales of Ford, Chevy, and Ram. It’s David versus Goliath, essentially, an analogy that’s proven with one figure. In the same time that Ford sold 65,192 F-Series pickups, Nissan only sold a dismal 719. The Titan is barely a blip on the automotive landscape. In the hopes of changing that, Nissan brokered a deal with Cummins, which supplied Nissan with the company’s 5.0-liter diesel V8 engine to power the new Titan XD. The engine has 310 horsepower and 555 pound-feet of torque, which isn’t terrible until you consider its diesel competitors—and even the EcoBoost 3.5-liter V6—are producing more torque, getting better gas mileage, and feature better hauling and towing figures.

The Nissan Titan XD is rated to tow up to 12,000 pounds, and is able to carry a payload upwards of 2,000 pounds. But looking at the EcoBoost 3.5-liter V6 from Ford, it shares almost the same figures, the only difference being a slightly lower towing capacity. Where the diesel really fails to impress is in gas mileage, which we couldn’t get over 11 miles per gallon. We didn’t hammer the truck either, driving at 55 miles per hour along desert highways. That’s just not acceptable when you consider the EcoDiesel Ram gets over 28 miles to the gallon. Here’s where that Goldilocks intro really comes into play. The new Nissan Titan XD is just barely bigger than an F-150, and just barely smaller—or so Nissan says—than an F-250. We say “so Nissan says” because while driving it, a brand new Ram 2500 dually slotted up next to us, and the Nissan was just as big, if not bigger, than the Ram.

Palatial Interior Be Damned Nissan said that it had spent a large amount of time making the interior of the Titan XD more plush. The seats are inspired by NASA technology, they explained—and to Nissan’s credit, they were comfortable. But this is definitely no competitor to Ford’s F-150 King Ranch or Chevy’s Silverado Z71. The Ford F-150 King Ranch is truly an exercise in American exceptionalism. The Nissan Titan XD, which is built here in America, isn’t. The interior is full of hard plastics, a weird cut out on the dash that look as if Nissan wanted to put a heads-up display but didn’t, tons of shiny fake chrome, and a steering wheel that feels like it was lifted from a used Sentra. What really sealed our opinion on the interior is that Nissan brought along a GMC Sierra 2500 to compare the Titan XD. This might have been a mistake. The gap in interior quality alone, is vastly in favor of GM.

Redeeming Qualities The amount of technology thrown at the Titan XD’s towing capacity is surprising. When you don’t have someone with you to help guide, drop, check the lights, and tow a trailer, it becomes almost impossible. For the Titan XD, Nissan developed systems that make towing a one-person job. For instance, the key fob has a button that checks the trailers brake lights and turn signals for you. The back-up camera works in conjunction with the truck's radar system allowing you to reverse to the trailer in one shot. All you have to do is lower the trailer hitch onto the ball. Where it also works well is off-road in the PRO4X trim. Diesel engines are perfect for rock crawling, off-roading, and generally getting to places where most normal trucks couldn’t. We took the Titan XD PRO4X on steep grades, loose sand, and over quite a few boulders. Never once did it hiccup.

The Verdict We only were given a short time with the Nissan Titan XD, and we’d be interested to see if our opinions change if we spent more time with it (which we hopefully will). The truck has good bones, it just doesn’t seem like it was executed in the best way possible. We wanted to like it, but the new Titan XD still needs work. The interior isn’t up to par with any of its competitors, the diesel isn’t as powerful, and the steering is very vague. It goes back to the Goldilocks analogy used above; Nissan wanted something right in the middle and wanted it to be just right, but in the end, it’s compromised by that goal. Either build something that competes with smaller trucks, or build something that competes with the larger ones. The middle just isn’t right.