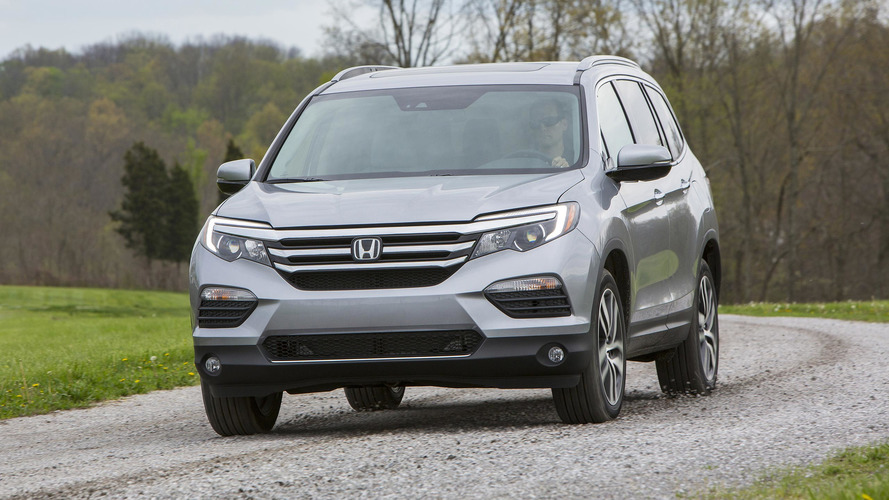 The Honda Pilot is back – and it's bigger and bolder than ever.

I know, the Honda Pilot isn’t the most exciting vehicle on the planet. But hey, knowing the ins and outs of almost every vehicle we can is part of the job. So in between fancy drinks and the booming Ohio nightlife (I’m kidding, Cincinnati was great), I got some wheel time in Honda’s latest and possibly greatest SUV offering.

You’ve already seen our HR-V review – but where the HR-V sits at the very bottom of Honda’s SUV range, the new Pilot is Honda’s large-and-in-charge three-row performer. And it definitely performs.

You have to admire any brand that finds a new way to make life easier in the SUV. Like Ford's foot-activated lift gate, for example. What Honda did in their new Pilot, then, was make sure intuitiveness was at an all time high. First and foremost being third row access. One button – that’s all it takes to get to the back seats. The easy push button moved and lifted the whole seat out of the way, allowing children and small adults easy access to the back.

And then there’s the trunk. Honda was pretty excited about this nifty little feature. Instead of the ridiculous strap and pulley setup they used in the previous Pilot, the new Pilot featured a single cover that features carpet on one side and plastic on the other. You could leave it flat on top, or stow it down in the bottom to make like a cubby for groceries or plants. Of course, the back seats also fold down flat, so you can fit your dogs, kayaks, anything in the back with ease.

It may all seem a bit trivial, but those little tweaks in design make efficiency even that much greater.

Most of the time when talking about three-row SUVs, we need to make sure the interior is durable, comfortable, and a bit advanced. Good news is, Honda hit the nail on the head in those three areas.

You’re met, first and foremost, with Honda’s new touchscreen system. And while I’m not a fan of most touchscreen systems, it wasn’t all that difficult to use. It took a bit of finagling at first to figure it out, but it comes out as one of the best systems on the market right now. At least there were simple buttons and knobs for air conditioning and other features.

And then you look at the overall quality of it. Everything feels good – no plastic, no cheap material. It was a really nice place to be, and considering you’re driving a big SUV, it needs to be a nice place for everyone involved.

The transformation from first-gen to current-gen is like looking at two different SUVs. Gone is the cheap plastic interior, in its place is a modern, sophisticated cabin. The exterior also gets a major redesign – ditching the boxy look in place of something prettier and more mainstream. The Pilot looks more maturing in the growing three-row segment.

Putting the two SUVs next to each other is like night and day. And driving the two felt the same. That seemed like a feat Honda was pretty proud of considering they had both on hand for us drive. At the end of the day, I was pretty impressed with Honda's new SUV. Modern, sophisticated, and much improved. As far as three-row SUVs go, you'd be hard pressed not to get the new Pilot.