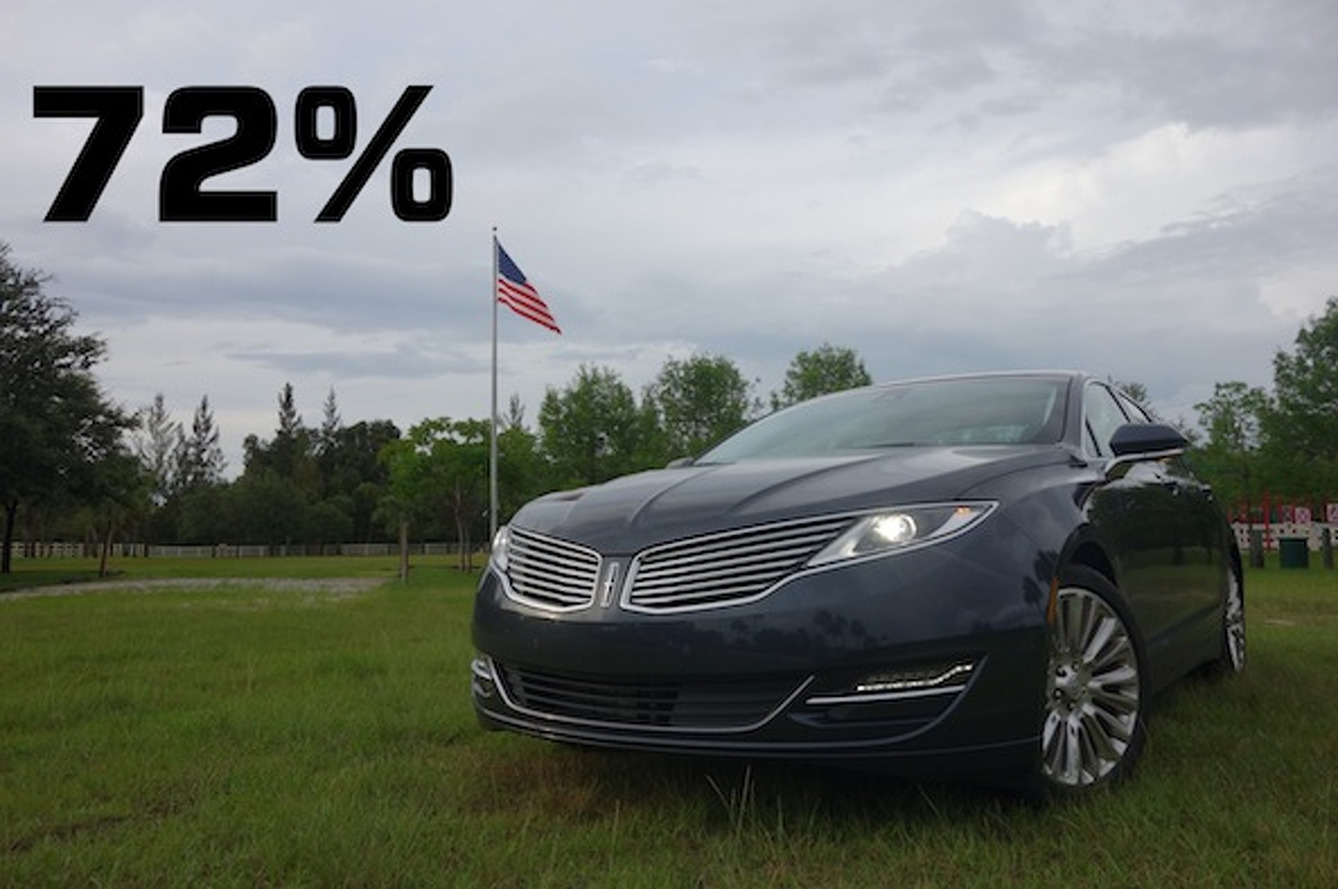 Have you ever heard the old phrase "putting lipstick on a pig?" The 2013 Lincoln MKZ is sort of like that, except the pig isn't so much a pig but rather a well-versed sedan known as the Fusion in the Ford lineup. You get it. But we'll start with this. It's a luxury car, of course, and as with any luxury car, it should come with many luxury things. Like a fancy navigation screen, big door handles, a steering wheel covered in leather, room in the back for two or three lovely ladies. The whole show.

But when you really get down to details with the Lincoln, you're sort of trying to figure out how this beautiful (it is indeed beautiful) vehicle will make a name for itself in years to come, as the alternative to the BMWs, Audis and Mercedes' of the world. We're not entirely sure how that's possible, but we will tell you a bit about our experience with the new MKZ. So listen up.

When it comes to looks, overall, it's a really great looking thing. I couldn't really put my finger on it, but it seems to muster up that same feeling of great, classic Lincolns of past. A long swooping body line, an aggressive and sophisticated front end, all sitting on top of some monster chrome rims; optional, obviously. The interior is much of the same- sophisticated, clean, and not too cluttered. Although, we have some words for Lincoln in the tech department, but we'll get to that in a second. Otherwise, handsome leather all around, a few pieces of wood trim here and there, but nowhere near as overbearing as many of the luxury vehicles on the market today. And sitting inside of this graceful marine mammal made you feel like you had a bit more sense of porpoise (puns!).

I JUST WANT TO LISTEN TO MY MUSIC

This is where things will get somewhat uncomfortable for Linclon engineers. I'll drop it easy on you guys- what the hell? Touchscreen? Everywhere? WHY? From the air con to the volume to the radio; and not even on some large fancy screen similar to the Tesla Model S- oh no, but rather, sitting uncomfortably on top of a barrage of cheap plastic inlays that made the controls overly-sensative and sporadic if your hand fell too clumsily on the dash. And while personally we've never felt that Ford's SYNC system in the Focus or Mustang was anything overly-fussy, we were absolutely shocked at how unresponsive and overly-complicated the MyLincoln touchscreen system was in the MKZ. But let me make myself clear. The idea behind any luxury brand's nav system is to simplify any and all functions to which it may serve a purpose- navigation, bluetooth, apps, radio, temp., yada yada yada. For the Lincoln on the other hand, it was more of a sense of "Good morning, let's see how difficult we can make your life today." And never once did I ask too much of the car.

Like this. I like to listen to my music, from the Bluetooth system, using my iPhone. I've done it a million and one times, on a number of different vehicles. Yet for some reason, the Bluetooth worked one time when I first got the car, and then never again. It was like it was thrust into oblivion of Lincoln nowhereness. Thus, I was forced to carry around a USB cable like a vagrant. Even the Focus and the Mustang were easier to manage than a nearly $50K luxury car. Other features like an active cruise control including a blind-spot monitoring system and a lane departure warning were very nifty, also considering this is the same type of technology you'll find in a much more expensive Benz or Bimmer.

While the interior technology was nowhere near par where it should have been, under the hood the tech was A-O-K. A 4-cylinder EcoBoost engine paired to an all-wheel-drive system and 240 horsepower that was sufficient enough, and it returned somewhere in the neighborhood of 25 mpg (rated 22 city/31 highway). The automatic transmission was just that, and the paddle shifters were more useful than one would have originally imagined. Although, it needs to be in "S" mode for you to have any real fun with it.

The Lincoln was an overly-average, thrifty piece of Ford luxury engineering, with a bundle of technologies that were need-to-be-tossed-in-a-dumpster-behind-a-dive-bar kind of bad. Hell, just start over. But that's not to say we didn't like it. It was very handsome, more drivable than most, and when it came down to it a really nice place to be. But there's a problem. Lincoln has always gone through life as a luxury arm that seemed to fall short of BMW, Mercedes, Audi, Cadillac. It's never going to stand above the crowd as the go-to luxury brand, it's mostly going to remain an alternative similar to Acura or even Buick. It's good– it's just not excellent. What Lincoln really needs to do is reinvent itself with something that will leave jaws dropped around the automotive world. Beige and boring just isn't going to cut it this time around, folks.