A stunning 1,900-horsepower hypercar is a worthy tribute to Battista Farina.

The numbers boggle the mind: 1,900 horsepower, 60 miles per hour in 1.8 seconds, and 186 mph in under 12 clicks, or about as much time as it took the game-changing McLaren F1 to reach a mere 135 mph. With a ludicrous spec sheet and $2 million starting price, is it any wonder the 2022 Pininfarina Battista seems immune to hyperbole?

Despite its absurdist performance figures and stratospheric price tag, the Battista almost looks too pretty to be brutal. Stunning styling was de rigueur for the first ground-up production car from the storied design house, whose charismatic ‘P’ logo has graced countless Italian hardbodies, from Lancias, Fiats, and Maseratis to no fewer than 64 Ferraris.

The Battista shares a powertrain and carbon-fiber monocoque with the Rimac Nevera, whose chiseled angles are more blunt weapon than scalpel; the Battista’s oceanic curves and subtle contours manage to be both sensual and menacing all at once. Somehow the Battista seems like it might be less than the sum of its electrified parts, an empirical sleight of hand that promises big on paper but fails to deliver through the seat of the pants. Spoiler alert: we’re totally okay with admitting we were wrong. Supporting the notion that the Italian contender has a flavor all its own is Paolo Dellacha, Pininfarina’s head of product and engineering.

The lack of a Drift mode is just one hint at the Battista’s focus on finessed handling and balance. Beneath the beautiful bits is a T-shaped 120-kilowatt-hour battery pack that channels energy through four electric motors. The quartet dumps a combined 1,741 pound-feet at all four corners, with optional Michelin Pilot Sport Cup 2R tires – the same rubber the Porsche 911 GT2 RS employs – tasked with managing the fury.

The standard setup uses 20-inch wheels and is available with an assortment of tires (including winter options), but our tester carries a staggered setup with 20s up front and 21s in back. Six-piston Brembo calipers clamp down on two-piece carbon-ceramic discs to provide stopping duties, while the drivetrain also harnesses energy from regeneration and can help control braking temperatures by leaning more on regen when necessary. Double-wishbone suspension incorporates adaptive KW dampers, while torque vectoring enhances agility and yaw control.

Lift the dihedral doors to slide inside and the cabin presents a luxurious spread of authentic materials, from machined and anodized aluminum knobs to buttery leather. Up front is a small digital speedometer about the size of a phone, flanked by two tablet-shaped touchscreens. There’s a touch of eco-consciousness to the interior materials – Pininfarina used olive leaves for hide tanning and repurposed fishing nets for the floor mats. But the meat of the matter is in the switchgear, particularly the dial that selects one of five driving modes through a firm twist of cool-to-the-touch metal.

Calma offers maximum regeneration and a lazier throttle response for around-town cruising. Pura removes some dullness without pouring on the power and Energica brings a tad more heat, while the hilariously named Furiosa incorporates track-focused calibrations for a 2 Fast 2 Furious experience.

Climbing the ladder produces an escalating soundscape through two exterior and 10 internal speakers for dramatic effect, while a fifth Carattere (Italian for “character”) setting brings individually adjustable throttle, power delivery, traction, and ESP settings. Strangely, Pininfarina tied regeneration levels to drive modes and drivers can’t adjust on the fly. For those that care (we know you’re out there), the Battista promises an EPA range of 310 miles and 180-kilowatt fast charging that can get the battery from 20 to 80 percent capacity in under 25 minutes.

Because government regulations require certain pre-production vehicles to follow a lead car, my around-town drive through Palm Desert, Pininfarina chassis and engineering manager Georgios Syropoulos chaperoned us in a dual-motor Tesla Model 3. It’s a fitting sled, as he developed it (and several other Teslas), not to mention the Lotus GT4 race cars he worked on as an engineering consultant.

The Battista certainly looks the part on public roads, swiveling necks and drawing camera phones right and left. And yet at moderate throttle in milder modes it feels positively tame, with linear power buildup and an intuitive throttle response. Steering feel is insulated but moderately communicative, and you’d never know there are oceans of power lurking beneath the calm facade unless you switched to more aggressive settings.

Dial to Furiosa, and the torque pours on smooth and strong – so intensely, in fact, that you’ll quickly run out of road ahead of you, even while chasing a hot Model 3 driven in anger by the guy responsible for its road-hugging handling. This chase becomes a Sisyphean game of cat and mouse, as the Battista feels like it’s barely trying while the Tesla squiggles its way through corners, desperately hanging onto the road at warp speed. Though the torque vectoring system was locked into the Energica setting as a safety measure, the Battista still cornered sharply, with its Cup 2 Rs offering solid turn-in, a bit of understeer, and a smooth progression from mid-corner to exit.

With just one test car for four journalists, Pininfarina limited our street drive to a blast up and down a portion of Highway 74 before quick-charging the Battista and trucking it to Chuckwalla Valley Raceway, about an hour from our home camp. The 2.68-mile desert track offers few visual landmarks, making a tricky one to learn and recall.

Unblocked by a piddling pedestrian car and unfettered in Furiosa mode, the Battista responds to a stab of the accelerator with violent thrust, producing as many as 2.2 Gs of longitudinal force. Pininfarina recorded up to 1.8 Gs of lateral acceleration transitionally at the Nardo test track and 1.4 Gs continuously (though we might have been experiencing slightly less lateral force since the torque vectoring system wasn't in its most aggressive setting during our test).

Bring On The Battista: 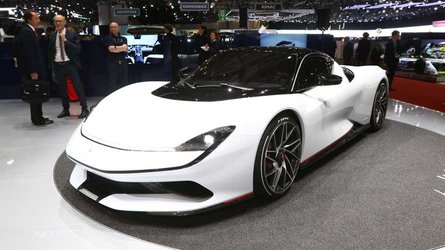 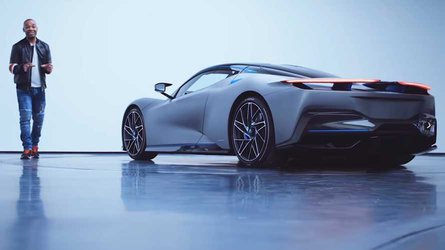 To unleash nearly 2,000 horsepower in a straight line is a literally breathtaking move. In its derestricted glory, the Battista’s four motors wind up with a combination of rage and smoothness, which creates a sensation that’s even more boggling than the numbers might suggest. Drop the hammer and look waaaay ahead, and boom, you’re already there. Unlike virtually any internal combustion engine car, the effect is truly instantaneous.

Without having to force atmosphere into combustion chambers (and/or accelerate turbos), the Pininfarina’s electrons transform into kinetic energy before you have time to process the whole wicked transaction. The carbon-ceramic brakes work well enough to make the driver feel like maybe they stopped way too early for the corner, though that also might have something to do with the fear of coming in too hot with all that power on tap.

We only had three laps in the Battista before handing it over to the next journalist (again, conservation was key due to the triple-digit ambient temps and considerable expenditure of battery power), but in our brief time, it delivered omnipotent power with handling that defied its 4,400-pound curb weight, even if its torque vectoring system wasn’t fully functioning.

With several more months of fine-tuning remaining before the Battista sees its first customer at the end of the year (and the first US delivery occurring in Q1 2022), Pininfarina’s inaugural effort represents an impressive debut from a brand previously known for beautifying other carmakers’ creations. Teaming up with Rimac for the drivetrain was perhaps the wisest move the design house could have made, as it offered a platform which they could individualize themselves without requiring a massive investment outlay.

If you’re wondering who spends seven figures on an electric hypercar, consider the older gentleman who test drove a Battista during Monterey Car Week, and was concerned it might not be comfortable enough for him. “No other car has given more comfort and smoothness than my Chiron,” he reportedly said after his test drive. “Now, I finally have an upgrade.”

Correction: A previous version of this review indicated the Battista's torque-vectoring system wasn't active during our test. This was incorrect. It was locked into the Energica setting on our pre-production tester as a safety measure. In production versions of the Battista, the torque-vectoring system will adjust based on the selected drive mode. This review has been updated to reflect this new information. We regret the error.