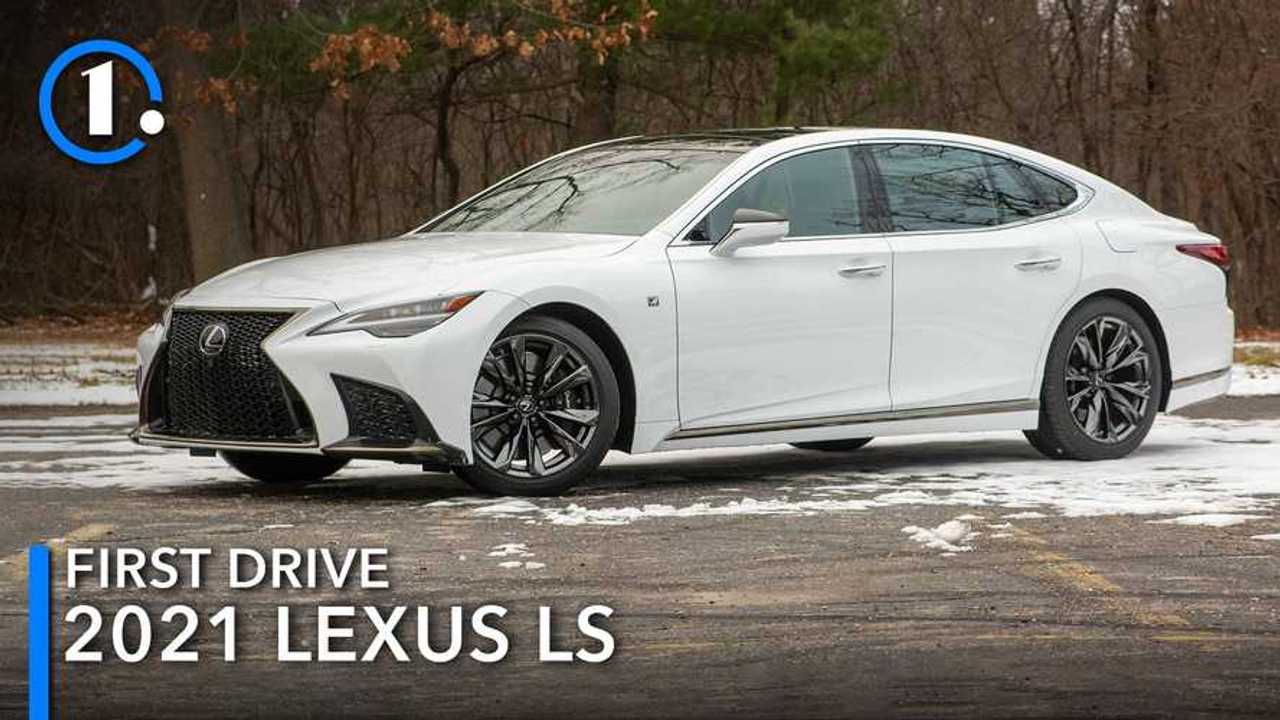 Common-sense upgrades abound in the refreshed luxury sedan, but there a lot of questions remain.

Automakers traditionally use mid-cycle updates to keep their products feeling fresh. Occasionally, a big change or an exciting new piece of tech comes along, but rarely does anything substantive happen. And based on looks alone, the 2021 Lexus LS appears to be another case of nipping and tucking.

And that'd be fine in most cases. The LS is a big, attractive sedan, especially in F-Sport guise, and its design is so aggressive that it still feels modern several years after debuting. But this refresh hides a number of substantial mechanical improvements under its familiar sheet metal.

How substantial, you ask? Well, the LS experience has improved to a degree that Lexus took the unusual step of loaning us a 2021 LS 500 F-Sort and a 2020 LS 500 F-Sport at the same time, for back-to-back comparisons. You won't need to take such measures, though. The new LS is a majorly improved product from the word “go” even if it suffers from some of the same oddities as last year's model.

The under-the-skin changes for the LS are not the things of breathless press releases. Engineers tweaked the dampers and the optional air suspension, swapped in new front and rear sway bars, added lighter control arms, and adjusted spring rates. The twin-turbocharged 3.5-liter V6 features a modified combustion cycle while the 10-speed automatic transmission benefits from “enhanced” shift logic. As changes go, this is all pretty darn boring.

And yet, the cumulative result is a much, much more composed ride on rough roads. When confronted with numerous small and medium impacts, which are common in metro Detroit during the winter, last year's model responded poorly. The ride feels brittle and nervous through the steering, which judders and, for a large luxury sedan, requires a sizable effort to keep pointed straight. Suspension noises creep into the cabin with surprising clarity, while tire noise is more obvious, as well.

The under-the-skin changes for the LS are not the things of breathless press releases.

By contrast, the 2021 LS irons out the harshest elements and mutes the sound of the road far better, though. The revised dampers, retuned (and optional) air suspension, and new control arms make their presence known immediately, isolating the updated sedan's cabin from whatever Michigan's pockmarked roads can throw at it. The only thing more surprising than the contrast between 2020 and 2021 is how uncouth (relatively speaking) the LS was in the first place – was Lexus really selling a flagship four-door with such poor manners all along?

Our test car featured every handling feature available on the LS, from the $1,400 air suspension to the $7,800 F-Sport Dynamic Handling Package (four-wheel steering, active anti-roll bars, and variable gear ratio steering). What's interesting about this gear is not that it's uncommon – the BMW 7 Series, Audi A8, and the upcoming Mercedes-Benz S-Class each have their own versions.

The LS stands out for how it uses them, though. The four-wheel steering and active anti-roll bars, in particular, can cut both ways, improving handling and minimizing the influence of weight while producing a more stable, comfortable ride. Unlike its German rivals, the LS puts more emphasis on the latter trait than the former.

The LS can waft down the road at high speeds with the best of them, but is less happy with sudden steering inputs, which provoke surprising body roll and a general unhappiness from the chassis. This doesn't feel as sharp or dynamic as a 750i or A8, but if you're driving your LS this way, you're missing the point. When it comes to big sedans, we'll take the Lexus' extreme isolation and quiet over flat, sharp handling any day.

The LS can waft down the road at high speeds with the best of them, but is less happy with sudden steering inputs

That quiet and isolation is all the more evident for 2021 thanks to the LS' powertrain tweaks. The twin-turbocharged 3.5-liter V6 that debuted in the LS way back in 2017 outgunned the 4.6-liter V8 it replaced – 416 horsepower and 442 pound-feet to 386 hp and 367 lb-ft – but the new engine was at a severe deficit in terms of refinement. Loud and prone to unpleasant vibrations that permeated the cabin, the 3.5-liter had the punch necessary for a luxury sedan but not the character or singing voice.

While Lexus says it merely “optimized and refined the gasoline engine combustion cycle,” that's an understatement. This engine is what should have launched in 2017 – a V6 that's as powerful as it is refined. At around-town speeds, the revised engine blends into the background with pleasant manners and a subtle thrum when under throttle. Give it the beans and power and torque are available in spades, paired with a smooth and premium-sounding note from under the hood.

In the racier drive modes, the LS sharpens the throttle response and asks the updated 10-speed automatic for some quicker shifts, but it also adjusts the sound from under the hood. And that, friends, is reason enough to leave the LS in Comfort – like other Lexus products, there's an annoying and overpowering artificial intake sound north of 3,000 rpms in Sport S and Sport S Plus. Comfort handles these higher engine speeds in a more natural, less intrusive way. 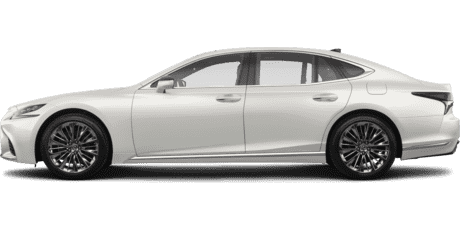 Lexus has dramatically improved refinement for its top-dog sedan, but a number of flaws remain that hold the LS back. Yes, there's a new-for-2021 touchscreen infotainment system. The screen itself is responsive enough and its graphics look pretty, but the hated trackpad remains, as does the cumbersome operating system that relies on it. There's also a design argument to make against the new screen since Lexus styled the LS cabin for a recessed display. Retrofitting the 12.3-inch touchscreen and the slab that houses it ruins the flow of an otherwise pleasant interior.

That cabin, meanwhile, is a broad improvement, even if the changes aren't as dramatic as those under the sheet metal. Lexus adjusted the padding for the front and rear seats, although the front chairs and the bizarre seating position remain uncomfortable for anyone over 6 feet tall. The armrests feature new leather upholstery and there are physical buttons for the heated seats. Fine changes, all in all.

But Lexus failed to also address the broader feature set. You won't find wireless Apple CarPlay or a wireless charging pad but, inexplicably, there's still a CD player. Things like that little slot in the center stack make the LS such an odd duck in this segment – it has the largest head-up display in the class, but massaging seats or heated arm rests? Nah.

One reason for these absences could be down to the price. The LS, as it's done for ages, handily undercuts Germany in both starting and as-tested pricing. The base rear-drive LS demands $76,000 to start – the six-cylinder versions of the BMW 7 Series and Audi A8, both demand around $86,000. Only the $72,950 Genesis G90, which coincidentally is the only vehicle in the class to place a greater emphasis on comfort, costs less.

The Evolution Of LS:

Our tester, a rear-drive LS 500 F Sport rings up at $79,600, while adding the entire options catalog drives that sum up to $98,630, or about the same as an optionless, V8-powered A8 or 7 Series (although both of those include all-wheel drive). The LS remains, then, an impressive bargain relative to every vehicle in the segment but the G90 (less than $81,000 fully loaded).

The value argument for the LS is stronger than ever in 2021, but we can't help but feel there are cracks showing. Even with the mechanical improvements, it's very easy to argue that the LS feels older and less progressive, and the US release of the redesigned S-Class (which, to be fair, probably will be even pricier than the Audi and BMW) in a few short months will likely exacerbate that perception. But for customers that merely want a big, ultra-plush luxury sedan and can happily pass on the technological tinsel, the 2021 LS marks a dramatic improvement where it counts: comfort and refinement.