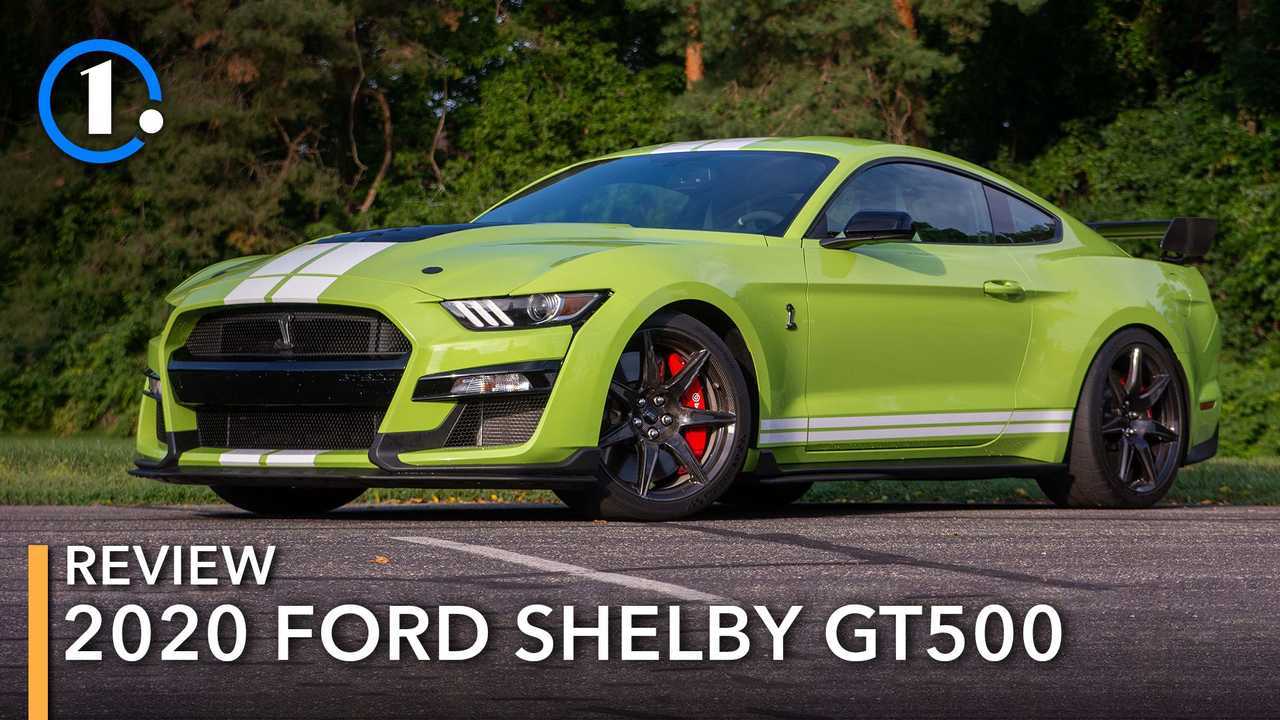 And yes, that’s a good thing.

There have been a lot of ultimate Ford Mustang models over the years. Remember the old SVT Cobra from 2004, with its 390-horsepower, supercharged V8? Or the three different Cobra R models? Or we could go even further back into the Mustang's storied history, when the Boss 302 and GT350 ruled. But while those are great Mustangs, it's been the GT500 that has held the title of Greatest Mustang whenever it was on sale.

The 2020 Shelby GT500, then, takes a crown that was always its birthright. But its reign will not be more of the same. This new car has as little in common with the character of past GT500s as the current Mustang does with one from 1965. It's a dramatic cultural shift for Ford's flagship pony car, and after a week behind the wheel, we started to forget this is even a member of that family. That's one of the many, many reasons to consider the latest greatest Mustang.

This thing looks absolutely menacing – it's like Super Shredder from Teenage Mutant Ninja Turtles II but, you know, a car. Awash in flares and vents and scoops – all done up in Grabber Lime with gloss black accents, in the case of our tester – the 2020 Shelby GT500 bears only a passing resemblance to lesser Mustangs. The Shelby has the profile, headlights, taillights, and that's about it. It's an extreme makeover that produces a far more muscular look for an iconic muscle car.

Are there things to dislike? Far and away, this feels like the largest Mustang in a long time, even if it's only half an inch wider or longer than a Mustang GT. There's a lot of visual mass, thanks to the way the design seemingly hugs the ground. We're lukewarm on the $18,500 Carbon Fiber Track pack's particular accents, too. The huge rear wing and carbon-fiber wheels make all the sense if you're attending routine track days, but anyone that's daily driving their GT500 will want the cheaper wheels and a wing that can't quite double as a buffet table.

But while the GT500's designers went ham on its exterior, there are precious few touches in the cabin. Like the GT350, a cobra badge graces the steering wheel's airbag cover. Drivers operate the dual-clutch transmission via Ford’s typical rotary dial, although designers wisely swapped out the small, flimsy paddle shifters of other two-pedal Mustangs for a big, gorgeous set hewn from real metal, for use while the gearbox is in manual mode. There’s also an Alcantara wrap for the steering wheel and a carbon-fiber finish on the dash.

The CF Track pack swaps the standard chairs for a beautiful set of Recaros (which are also available as a standalone option for $1,595), finished in a contrasting Ebony and Smoke (grayish-white) color scheme, and ditches the rear seats altogether. But aside from those modifications, this looks like any other Mustang's cabin, which is to say it's fine and functional, but hardly a place that feels all that special or befitting of a $90,000 track special.

You'll notice if you look at the gallery that our test model featured a roll cage and a four-point harness. This isn't a factory option, but Ford had been using this car at customer track events as a demonstration of what the stock body could accommodate and we didn’t mind the racy treatment during our loan.

Those Recaros are a must-have item if track exploits are in the cards – for anyone else, though, the ultra-supportive chairs and their firm padding border on restrictive. Larger folks should pass on them full stop, unless they enjoy having their pelvis compacted over every bump. But skipping the Track pack means missing out on the rear-seat delete, and cars get cooler the fewer seats they have. We wish Ford had come up with some kind of innovation for cargo management in this area – it'd be a nice alternative to the trunk.

The GT500 is aimed at the track, but the ride quality and noise, vibration, and harshness controls are impressive for the class. At highway speeds, there's little unpleasantness from under the hood, while tight seals around the windows keep noise at bay. The fat tires contribute most of the cabin sounds, transmitting whatever's happening with the road surface right to the driver's ears (an available 12-speaker B&O Play audio system helps hide the worst manners).

Unlike the Shelby GT350, the GT500 adopts the same 12.3-inch digital instrument cluster as the broader Mustang family. There are no special trimmings, features, or gauge packs in the GT500 (which feels like a missed opportunity in our eyes), but the display remains one of our favorite Mustang features. The graphics are clear and attractive, and while the way the system displays information isn't as customizable as what you'll find in some German products, there are still three different gauge modes available.

The digital cluster does have some serious functional value, too. Three different modes for shift lights – one that changes the color of the tachometer, another that illuminates the entire cluster, and (our personal favorite) a Formula 1–style progression of green, yellow, and red bars – and the ability to adjust the desired shift point is a brilliant addition for a car like the GT500.

Contrasting with the fancy display is the Sync 3 infotainment system and its 8.0-inch touchscreen, which remains a functional and easy to use setup. Its age, though, is showing in the limited feature set, relatively poor resolution, and relaxed response time – then again, our experience with Ford's excellent Sync 4 suite may be coloring our impressions here. This system, though, is plenty serviceable until a redesigned, Sync 4–enabled Mustang arrives. Unfortunately, even with a $70,000-plus starting price Ford still cordons off navigation as part of a $3,000 Technology pack.

The GT500 performs in a manner that exceeds simple qualifications such as "quick" or "fast." The hand-built engine, a brilliant 5.2-liter V8 equipped with a fat 2.7-liter supercharger, is the most powerful production engine Ford has ever built – output sits at 760 horsepower and 625 pound-feet of torque.

Now, yes, you can get more powerful engines elsewhere. The 797-hp Dodge Challenger SRT Hellcat Redeye is more potent, for example, as is the 775-hp Jack Roush Edition Mustang we tested earlier in the week. But the GT500 is beyond either of them, owing to how effortlessly it deploys that power. There is no drama. The backend doesn't wiggle. The car simply leans back on its haunches, grips the road, and goes. Few rear-drive cars feel like this while retaining a sub-$100,000 asking price.

The sprint to 60 takes a manufacturer-estimated 3.3 seconds and we have little reason to doubt that. But where the 5.2-liter V8 does a lot of work, the GT500's seven-speed dual-clutch transmission deserves as much praise (in fact, we'd entertain giving it the bulk). Set to manual and with the Shelby's Track drive mode engaged, the shift speed is immediate up or down – as soon as you so much think of touching the paddle shifter, the DCT is ready to serve up a gear. It's addicting and a huge part of why the Shelby feels so relentless under heavy throttle.

The Mustang made a big leap in 2015 when it ditched a solid-rear axle in favor of an independent rear suspension, but the GT500 represents a similarly sizable leap over the base Mustang, thanks to its sport-tuned MagneRide magnetorheological dampers and CF Track pack’s Michelin Pilot Sport Cup 2 tires. This is an incredibly sharp car, able to change direction quickly and carry serious speed through corners. Although we were only able to test it on public roads, the Shelby still impressed with its eagerness. The sole letdown came from the steering wheel, which remains the Mustang's weak point for feedback.

Well, every Shelby gets a solid set of LED headlights. But if you were hoping for more in the way of active safety, consider a Mustang EcoBoost or GT – the GT500 offers no active safety gear aside from blind-spot monitoring. Yeah, yeah, we know, it's a 760-hp monster. But that doesn't mean there aren't situations where adaptive cruise control or lane-keeping assist wouldn't make life easier.

Despite this shortcoming, the combo of good headlights and forward and lateral visibility are welcome. The rear wing compromises sightlines somewhat, but the GT500 is better than a comparable Chevrolet Camaro in this regard and a bit behind the more upright Dodge Challenger.

Our fuel economy goal for flagship muscle cars like the GT500, Challenger SRT Hellcat and Redeye, and Camaro ZL1 is 17 miles per gallon combined. But the GT500's 14-mpg combined rating (12 city and 18 highway) makes it the worst in the class, and its 93-octane fuel requirement drives the score down more.

By comparison, the Challenger SRT Hellcat Redeye and Camaro ZL1 return 15 and 16 mpg, respectively. That's despite their larger 6.2-liter V8 engines. Like the Shelby, both require premium fuel.

With a starting price of $70,300, the GT500 is among the most expensive cars in its class, but it loses most of its points owing to one very expensive option. The $18,500 Carbon Fiber Track pack adds 21 percent to the base price. Along with our tester's $1,000 vinyl stripe package, a Shelby-branded car cover, a $2,600 gas-guzzler tax, and a $1,095 destination charge, this tester rings up at $93,890. The only missing option was the $3,000 Technology pack, which adds navigation, blind-spot monitoring, and the B&O Play audio system.

The Mustang's starting price is $105 more than an $70,195 SRT Hellcat Redeye and $7,300 more than the Camaro ZL1. But while the Mustang then adds $2,600 in gas-guzzler charges for a real-world starting price of $72,900, the Challenger and Camaro only suffer with a $2,100 tax. The Shelby avoids losing a point for being the most expensive car in its class thanks to the $76,595 Hellcat Redeye Widebody and the upcoming Challenger Super Stock. To its credit, it also offers a more advanced suspension and track-ready gearbox relative to its more conventionally “old-school” rivals.