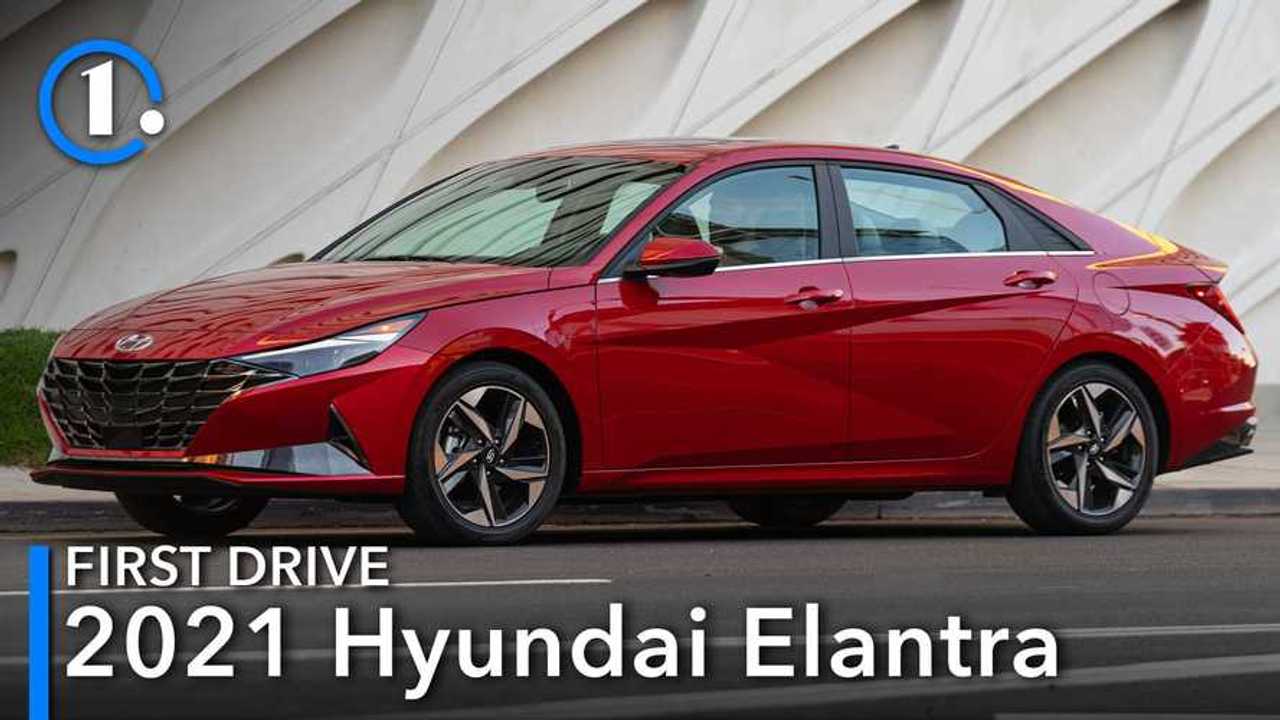 The new Elantra goes down smooth, whether in standard, hybrid, or N Line form.

A newcomer to the US market three decades ago, Hyundai boasted brisk initial sales that soon tapered off due to reliability concerns, but in the intervening years, the company has turned some of the worst products on the market to some of the best. No longer an also-ran, Hyundai has been playing hardball for years now, and it shows no signs of letting up.

The 2021 Hyundai Elantra, Elantra Hybrid, and Elantra N Line continue that trend, boasting an attention-grabbing design, excellent chassis refinement, and a trinity of engine options ranging from eco-conscious to enthusiastic. Although the compact sedan has a few flaws, the Elantra poses a significant threat to every car in its class (and that’s leaving out the full-blown Elantra N – read all about that one here).

The Motor1.com staff has argued the merits of the Elantra’s wacky design since it took its first bow in March. For the record, I thought this compact sedan looked cool in photos, but in person, it’s even more fun and funky. The intersecting tangrams on the doors catch light in unusual ways, with knife-slit LED accents in the headlights and sharp textures in the front grille making it look more like a piece of Frank Gehry architecture than a car.

Although clearly a front-drive compact (lots of overhang and a short dash-to-axle ratio), the Elantra’s fast roofline and tapering rear quarter panels set it apart from other, more traditionally styled members of the class. The full-width LED taillight accent forms a stylized “H,” making the rear end as distinctive as the front. Of course, the exterior isn’t for everyone, but considering just about every vehicle in this segment attempts to be stylish – from the graceful Mazda3 to the handsome Nissan Sentra – it behooves Hyundai to be distinctive and daring with the 2021 Elantra.

The Elantra’s fast roofline and tapering rear quarter panels set it apart from other, more traditionally styled members of the class.

I drove three different trim levels in my time with the compact sedan. The Elantra Limited and Elantra Hybrid Limited are all but indistinguishable from the outside, with 17-inch wheels in a swirling five-spoke design, chrome beltline moldings, and LED head- and taillights. Even the base-model Elantra SE gets alloys (though smallish 15-inchers), while the SEL-trim Elantra and Elantra Hybrid get 16-inchers. Daytime running lamp LED signatures are standard across the board, but the SE and SEL make do with halogen high and low beams.

For maximum visual effect, the Elantra N Line is the move. Five-spoke 18-inch wheels with a sharper design fill out the fender arches rather nicely, and the front bumper features a much more conventionally attractive shape, with fewer intersecting planes. The rear bumper is likewise more aggressive on the N Line, with a slick TIE Fighter–lookin’ blackout panel at the bottom that matches a dark-finished trunklid spoiler.

The interior of the Elantra borrows liberally from the larger Sonata, and that’s no bad thing. A fresh, unique steering wheel design is a welcome respite from the typical three-spoke helms we’re used to seeing on most compacts. On the Limited and Limited hybrid models I drove, a bold infotainment/instrument cluster combo panel comprises two 10.3-inch screens, beveled in the middle to envelop the driver’s seat slightly.

A big, triangular grab handle between the front passenger cabin and center console furthers the cockpit-like feel of the Elantra. A tiered dashboard design, not unlike that of the Hyundai Santa Fe, eases claustrophobia with wide, sweeping lines spanning out across the dashboard and door panels. Such interesting and bold design is rare to see in a commodity car like the Elantra.

Unfortunately, the cheap materials that abound in the cabin are all too common in this class of vehicle, and I’m pretty disappointed that frequent touch points (like that passenger grab handle) are hewn in hard plastic with a nasty seam joint. Ironically, the Elantra’s attractive interior design compounds the matter – you want to touch everything to see if it feels as nice as it looks, and it just doesn’t. The hard plastics on the dashboard and door panels are forgivable considering price and class, but the uncomfortably thin padding on the center and outer armrests aren’t.

The front seats earn back some points. The heated leather perches on the Limited are supportive and comfortable for long stretches, with good lumbar support and six-way power adjustment. Meanwhile, the N Line gets well-bolstered, power-adjustable, heated leather and cloth sport seats that look wonderful – check the subtle “N” logo in the seatback – and feel good on the highway and in corners. The sporty Elantra also gets slick red stitching on the dash, door panels, and seats, befitting its more aggressive demeanor.

Better Than It Needs To Be

Compared to some of its rivals, the 2021 Hyundai Elantra Limited is one smooth operator, even on the buckled, expansion-jointed concrete that passes for the Los Angeles interstate. For more direct comparison, the Elantra handled these roads much more adroitly than the Nissan Sentra did a few months ago, with a planted and well-controlled ride that made for very confident handling at speed. Historically, this class of car tended to offer driving dynamics that were mediocre-to-fair, so it’s always a treat to drive a compact sedan that comports itself with genuine poise.

Heading into the corners, the conventional Elantra does a convincing imitation of a much sportier sedan. Although not overtly performance-oriented, it still handles tight turns with more grip than expected. Steering isn’t very communicative, but it is reassuringly heavy when in sport mode (go for the Mazda3 if you want truly athletic reflexes) and the four-wheel disc brakes had plenty of bite for the long, winding downhill stretches I saw in my drive around Oxnard, California.

If there’s one shortcoming with the Elantra, it’s that the standard engine is a just-barely-adequate, port-injected 2.0-liter inline-four with 147 horsepower and 132 pound-feet. The base Honda Civic LX’s 2.0-liter outdoes the Hyundai by 11 hp and 6 lb-ft – adding insult to injury, Civic EX trims and above get a standard 1.5-liter turbo four with 174 hp and 162 lb-ft. Likewise, the Mazda3 is much more sporting, with a standard power rating of 155 ponies from its base 2.0-liter four and an available 2.5-liter engine that ups that number by 30.

At the very least, Hyundai deserves lots of credit for the continuously variable transmission that comes standard on every mainline Elantra. The CVT manages power well, offering neither the coarse droning nor the unconvincing “shift” points of similar ‘boxes. And the transmission contributes to an as-tested EPA rating of 31 miles per gallon city, 41 highway, and 35 combined, edging out the Sentra, Mazda, and base Civic – the Honda’s optional turbo outdoes the Elantra though.

If fuel economy is the primary concern, the new and first Elantra Hybrid works just about as well as the internal combustion–only sedan while offering 49 city, 52 highway, and 50 combined mpg in Limited form (the lighter SEL gets 53/56/54). A 1.6-liter four-banger runs on the Atkinson cycle for more efficient operation, and thanks to a 32-kilowatt electric motor, total output is a reasonable 139 hp and a stout 195 lb-ft. The Hybrid borrows its powertrain from the Ioniq, which means it also gets a six-speed, dual-clutch transmission. Tuned for efficiency, it’s still more responsive than the conventional Elantra’s CVT.

If there’s a shortcoming to the electrified Elantra, it’s found in the rolling stock. Although it rides on the same wheels as the regular Limited, the gas-electric gets different tires that produce noticeably more road noise at any speed above 40 miles per hour.

The most exciting variant of the Elantra family is the N Line – at least until a full N model arrives next year. The N Line ditches both the naturally aspirated 2.0-liter and the hybridized powertrain for a turbocharged, direct-injected 1.6-liter inline-four that makes 201 hp and 195 lb-ft – numbers that will feel familiar to current owners of the outgoing Elantra Turbo or Elantra GT N Line. Transmitting that power to the ground is the work of a standard six-speed manual gearbox or an optional seven-speed dual-clutch transmission.

But while three-pedal apologists might salute the presence of a “proper gearbox” in the Elantra N Line, their celebrations might be a bit premature, since the six-speed suffers from rubbery throws and unreasonable rev hang. Coasting through a corner in neutral, I had to check the shifter twice to ensure I hadn’t left it in gear, and upshifting on acceleration is an exercise in patience since the revs don’t fall off quickly enough for smooth shifts. Compounding matters is a somewhat lazy throttle that made rev matching on downshifts a bit tricky.

The N Line I drove was a pre-production unit, so I’m hopeful the engine programming will be fine-tuned before the car launches to allow for more natural throttle response – the Veloster N proves that Hyundai can build a good manual. Otherwise, the Elantra N Line is a lovely compact sport sedan, with a well-damped ride that keeps mid-corner bumps under control without smothering road feel. The stout brakes feel more aggressive than those of the base Elantra, an improvement that could be due in part to the N Line six-speed’s summer tires.

The 2021 Hyundai Elantra and Elantra Hybrid arrive in dealers near the end of the month, with the N Line following early next year (before the Elantra N, which is due by summer). After a couple days behind the wheel, I’m confident saying that they’re Hyundai’s best compact cars ever. Although there are a few small issues – interior quality and the N Line’s throttle tuning among them – the Elantra family is yet another convincing argument that Hyundai is still playing for keeps.