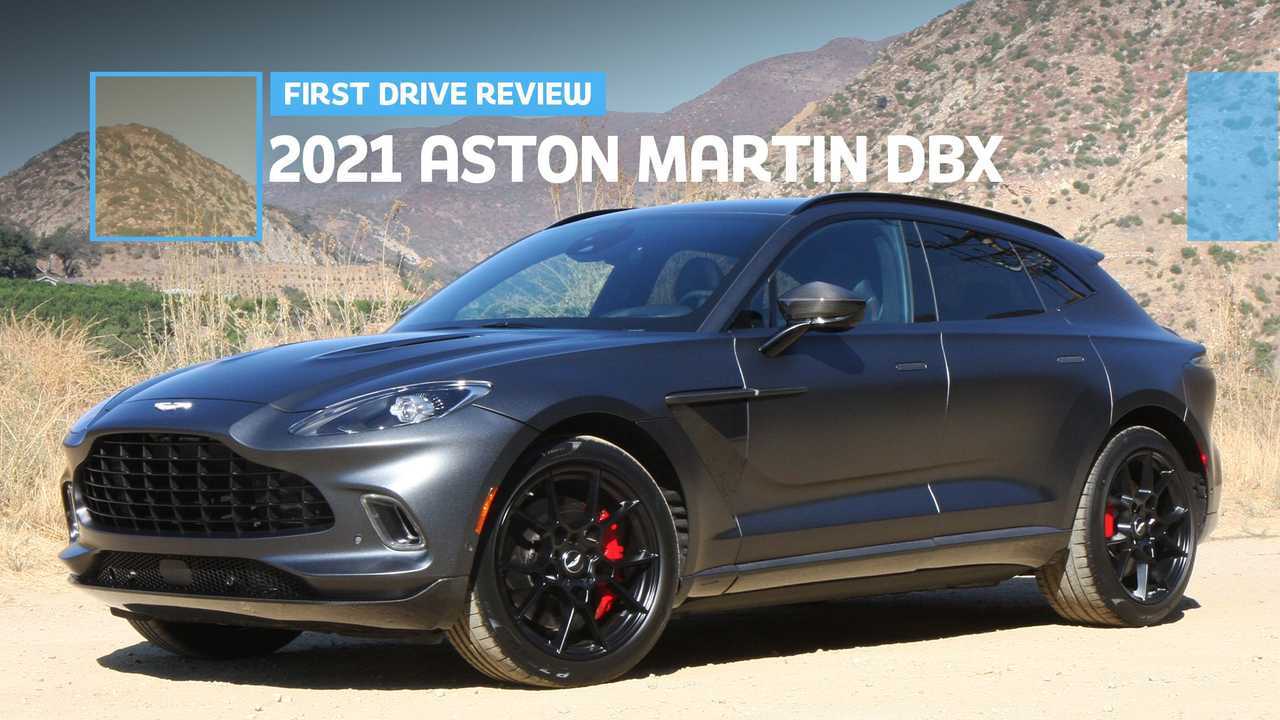 The company’s first SUV gets a good shakedown, both on pavement and dirt.

Sooner or later, just about every automotive brand will come to the same conclusion: People will always buy SUVs. Porsche learned that lesson when it introduced the instant-bestseller Cayenne in 2003, and carmakers like Bentley, Lamborghini, Rolls-Royce, and Maserati followed suit. Now, with the 2021 Aston Martin DBX, it’s Gaydon's turn to woo the high-riding masses.

The road to an Aston Martin SUV has been long and slightly strange. The 2009 Lagonda concept was the first evidence the sports car brand was considering an all-terrain hauler, but its ungainly front end and bustle-back trunk thankfully doomed it to show-car purgatory. Then came the DBX concept of 2015, a high-riding EV with styling that actually previewed the DB11 coupe, not the SUV whose name it foreshadowed. Finally, after 11 years of refining the formula according to the company’s evolving brand values, the 2021 Aston Martin DBX is here, promising more emotion than the Bentley Bentayga and more refinement than the Lamborghini Urus.

Splitting that difference between zest and rest is key to the “Second Century Plan.” Revealed in 2015 – a couple years after Aston Martin Lagonda’s centennial celebration – the strategy detailed participation in three key segments: sports and GT cars, mid-engined vehicles, and SUVs. In the near term, Aston wants to cement its place in the GT and SUV markets, and the DBX will do just that by being one of the cheaper entries in the high-end field, at $176,900 – an Urus crests $200,000. And the DBX is actually $13,000 less expensive than the company previously announced thanks to some pricing restructuring.

Is the modern DBX, built at a new facility in St. Athan, Wales, special enough to fit in with other Astons? It certainly looks the part. The signature grille shape traces its lineage to the 1950s DB2/4, so there’s no mistaking the SUV’s heritage. At the other end of the timeline is a decidedly modern spoiler treatment shared with the avant-garde Vantage two-seater, complete with full-width lighting that traces the ducktail’s aggressive contours. The barrel-shaped body, broad shoulders, sleek greenhouse, and a stylish, functional fender vent mean the DBX is every inch an Aston Martin, though one with a more capacious form factor.

The DBX certainly looks the part.

Taking full advantage of that interior space, our DBX tester is remarkably well constructed inside. Lovely leather, sophisticated carbon fiber trim, Alcantara, or soft-touch plastic drapes every single surface the eyes and hands can reach – a thickly padded panel on the seat bottom even obscures the metal slider and seat frame. A beefy steering wheel rim with nicely shaped thumb bolsters sits within easy reach of column-mounted aluminum shift paddles that make a satisfying metallic rasp with every manual gear change. And space abounds, even in the rear seat and cargo area – owners of the cramped Rapide sedan will be jealous.

The combination of twin-turbo 4.0-liter V8 and nine-speed automatic is an exciting one.

In terms of styling and quality, the Aston Martin DBX makes bold promises, with a spec chart to back them up. Under the long hood is a twin-turbocharged 4.0-liter V8 sourced from Mercedes-AMG (for now), but tuned by the folks at AML. The DBX's engine makes 547 horsepower and 516 pound-feet, good enough for a sprint to 60 miles per hour in a claimed 4.3 seconds (competitive with the Bentayga V8 but slower than the Urus and the Porsche Cayenne Turbo E-Hybrid) and a top speed of 181.

A nine-speed automatic transmission routes power to an active all-wheel-drive transfer case that defaults to the rear axle in sporty driving, where an electronic limited-slip differential helps provide better traction. The combination is an exciting one: eager, smooth downshifts and a free-breathing engine that enjoys hitting the redline over and over again, with plenty of traction and responsiveness from the drive axles.

The emotional design and empirical specifications support a theory that the DBX is a bona fide Aston Martin, so we saddled up a remarkably aggressive-looking Satin Xenon Grey example for further testing and set our sights on some of Central California’s most punishing curvy roads. With asphalt that has to contend with winter ice, summer landslides, and year-round seismic activity, these bumpy and twisty routes provide comprehensive evaluation of both athleticism and refinement.

In short, the company’s existing clientele will appreciate the 2021 Aston Martin DBX for its remarkable responses. With the five-mode drive selector set to Sport, the DBX preserves a safety net of stability and traction controls (Sport Plus ditches the nannies altogether), but every other system – steering, throttle, transmission, suspension, and adjustable exhaust – becomes the most enthusiastic version of itself.

The company’s existing clientele will appreciate the 2021 Aston Martin DBX for its remarkable responses.

That means the gearbox provides eager downshifts on hard braking and holds gears through corners, even near redline. The DBX lowers itself 10 millimeters thanks to a three-chamber air suspension, and the adaptive dampers provide a firm, controlled ride that still avoids feeling harsh or crashing over undulations or broken pavement. The feisty engine wakes up with more aggressive throttle response, barking a lopey, hot-rod song through the twin-outlet dual exhaust. And the darting, obedient steering – let down only by somewhat numb road feel – gives the DBX sports car responses. Notably, the Aston Martin DBX is listed as one of the Fastest SUVs in the World.

On these twisting roads, the DBX is a stellar performance SUV. While some vehicles in this class seem to pound the road into submission with computer-controlled grip and power, the Aston Martin seems almost analog, offering a more intimate connection with the driver than expected. Lots of credit here goes to standard active anti-roll bars, which erase the tippy body motions expected of a crossover and provide a more direct, seat-of-the-pants link to the road. The exuberant exhaust note helps too, encouraging manual gear selection by way of those lovely paddle shifters, just to command the engine’s song.

Settling back into the DBX’s most comfortable setting (succinctly named GT), we hit the freeway in search of another kind of automotive arena. While Aston Martin will likely never attempt the Rubicon or Hell’s Revenge in this particular SUV, the company promises some amount of rough-road capability, which we sought to prove on the Power Line Road, at Hungry Valley State Vehicular Recreation Area. This relatively easy dirt path provided plenty of reason to select Terrain and Terrain Plus modes, which increase ground clearance slightly to a max of 9.3 inches – at the expense of suspension travel – and encourage use of the forward drive axle.

Within a few minutes, it became clear the DBX wasn’t really in its comfort zone, possibly due to aggressive summer tires mounted on 22-inch wheels. Still, better rubber wouldn’t erase the uncomfortable sensation when traversing obstacles with the suspension travel maxed out – fears over wrecking the expensive SUV’s carbon fiber bumper accents kept us at the higher ride height. That said, the Aston Martin still dutifully traversed every hump and eroded rut in the road. Since most buyers will only see “terrain” on the occasional trip up a gravel driveway or a snowy lane, our trip through Hungry Valley proved the DBX is good enough.

Back On The Road

On the way back home, we had more time to appreciate some of the DBX’s characteristics. In GT or Sport modes, the Aston Martin SUV’s ride is cushy and comfortable, even over expansion joints and concrete slab roads, with little road or wind noise to fatigue its occupants. And the expansive side windows alleviate claustrophobia immensely (particularly for passengers in the comfortable rear seats) while also providing excellent blind spot visibility.

The infotainment system, which is actually a reskinned version of Mercedes-Benz’s old pre-MBUX interface, is attractive and familiar, although somewhat laggy. However, the all-digital instrument cluster, complete with a simulated tachometer that swings counterclockwise like on older Astons, saddened our purist hearts – it doesn’t look half as premium as the finely crafted analog gauges of the previous-generation V8 Vantage.

The front seats offer plenty of adjustment but it’s hard to find just the right position, and the beverage holders make the infotainment controller difficult to reach if there’s a bottle or coffee cup there. A big rearview mirror and active safety array in the center of the windshield block the driver’s sightlines in right-hand corners and off-ramps, and a fashionably pinched backlight hampers visibility to the rear.

Depending on a potential buyer’s budget, the price may either be a turn-off or an incentive. At its starting point, the $176,900 DBX is pricier than the $163,200 Porsche Cayenne Turbo S, but marginally cheaper than the $177,000 2021 Bentley Bentayga V8 and quite a bit more affordable than the $203,995 Lamborghini Urus. Like any luxury car, customizing the DBX rapidly thins the wallet – special satin paint costs a breathtaking $9,100, while the carbon fiber body modifications (grille, mirror caps, front and rear bumpers, side skirts, and fender vent trim) cost a combined $25,800 split between two different packages.

With special wheels, a sports exhaust, red brake calipers, carbon fiber interior trim, contrast stitching, and a few other upgrades, our tester cost $230,586 (including $3,086 for destination). That handsome sum is par for the course in this class of vehicle, where $50,000 in options isn’t uncommon, and even at its as-tested price, our DBX doesn’t come close to the base of a Rolls-Royce Cullinan ($330,000).

Irrespective of price, we confirm Aston Martin’s Goldilocks claim that the 2021 DBX offers plenty of driving flavor without sacrificing refinement. That just-right combination befits the Second Century goal of being “the Great British Car Company that creates the most beautiful and accomplished automotive art in the world.” Distinctive styling, excellent performance, and a tranquil cabin make the DBX an Aston Martin GT car for all seasons, all roads, and all (well-heeled) families.