A V8-powered Jeep is as fun to drive as we could have possibly hoped.

Ford introduced the Shelby Cobra concept car when I was in high school, a prototype that looked for all the world like the burly Cobra 427 that initially stoked my love of cars as a child. Imagine my disappointment, then, when I learned that concept cars usually never touch pavement, often relegated to the show stand. But Jeep is bucking that trend, and today, I’m behind the wheel of the wild, V8-powered Wrangler 392 concept.

Okay, I’ll admit that’s not a fair comparison. The Shelby was a one-off, hand-assembled machine that shared practically nothing with existing Ford vehicles, while most of what makes the Wrangler 392 comes from the parts bin: SRT donated the 6.4-liter Hemi V8, while engineers made some small modifications to the stock Jeep Wrangler Unlimited body shell. Still, opportunities to drive one-of-a-kind vehicles like this don’t come knocking often. So, how’s she do when the rubber meets the road?

Foremost, this 450-horsepower Wrangler is undeniably badass. Jeep claims the 392 will hit 60 miles per hour in less than five seconds, which might put it in lock step with the 4.2-second Grand Cherokee SRT (which also boasts that 6.4-liter V8). And with 450 pound-feet of torque on tap, the Wrangler 392 is primed to eat the lunch of every other off-roader on the market – including the rumored Bronco Raptor. Accompanied by a gruff, snorting exhaust note, the V8 Jeep feels like it could shift the rotation of the earth just a tiny bit.

Before we get too excited, though, there’s a caveat. Since the Wrangler 392 is a concept, not all of its systems are ready for prime time – in that vein, the stability control needs some calibrating. Mashing the throttle at any speed results in a flickering little dash light and what feels like slightly reduced power output. Meanwhile, rolling into the go-pedal slowly meant we couldn’t command a kickdown from the eight-speed automatic transmission, blunting the power delivery a bit.

That said, a hyperactive traction nanny can only hide those twin “450” numbers so much. Once rolling and with the throttle smoothly – yet fully – applied, the Wrangler 392 points its nose to the sky, the body twisted toward the right rear wheel as the chassis copes with the engine’s prodigious output. Compare it to a sand dragster and you won’t be far off, in either fun factor or vehicle dynamics.

The hilarious nature of the Wrangler 392 isn’t limited merely to the powertrain. Jeep also fit the machine with four half-doors reminiscent of Cher Horowitz’s 1994 Wrangler YJ (a cinematic icon of vehicular fun above all else), as well as the company’s Sky retractable-canvas hardtop with removable rear quarter windows. With the sunroof opened and all windows removed, the 392’s song emanates clearly from understated exhaust pipes, blending intoxicatingly with the sights, sounds, and smells of the outside world. The sandrail metaphor holds up.

As blustering as the powertrain is, the Wrangler 392 wears rather conservative styling. Granite Crystal exterior paint pairs with lovely bronze exterior accents, including “Jeep” and “392” badging scattered tastefully on the front end. The boldest styling feature comes via the custom red interior, which looks great cast against the restrained exterior. Beadlock wheels and 37-inch tires, together with a 2-inch suspension lift, give the Jeep both a purposeful stance and 13.3 inches of ground clearance, as well as a water-fording depth of about 34 inches (up 2.5 inches and 4 inches over the stock Wrangler, respectively).

Unfortunately, Jeep limited my time with the Wrangler 392 to just 10 minutes of on-road driving in the canyons of Malibu, California, but even in its slightly ragged concept form, the off-roader handles with confidence. A wider stance counteracts the elevated ride height somewhat, and the heavier V8 engine imbues the front axle with a bit more weight and confidence relative to the 3.6-liter Pentastar V6 that comes standard in the Wrangler.

Jeep says it built the Wrangler 392 not as a preview of a specific production model, but a proof of concept to the naysayers who claimed a V8 wouldn’t fit between the off-roader’s nimble shoulders. But even so, company representatives hid a coy smile when asked if a similar vehicle was in the Wrangler’s future, only admitting that they were watching the public’s reaction – which has been almost universally positive. This author’s fearless prediction? Expect a V8 Wrangler before 2022.

More On The Monstrous Wrangler:

As such, it’s way too early to discuss potential pricing or fuel economy, but the aforementioned Grand Cherokee SRT offers some clues. A starting price of about $65,000 wouldn’t be out of the question for a production Jeep Wrangler 392, representing a jump of about $36,000 over the base Wrangler (the Grand Cherokee SRT demands a similar premium relative to the Laredo). And the lighter Wrangler might get better fuel economy in the city than the GC’s 13 miles per gallon, though the vertical windshield and bluff front end might limit the highway number to 18 or 19.

Whatever it costs and however much it drinks, the Wrangler 392 (or whatever production model will almost assuredly succeed it) is going to be a hot commodity among Jeep fanboys. As carefree and fun to drive as any Wrangler should be, that 6.4-liter Hemi nonetheless gives the lifestyle SUV some incredible moves. Sort out that traction control and sign me up for another 10 minutes – at least. 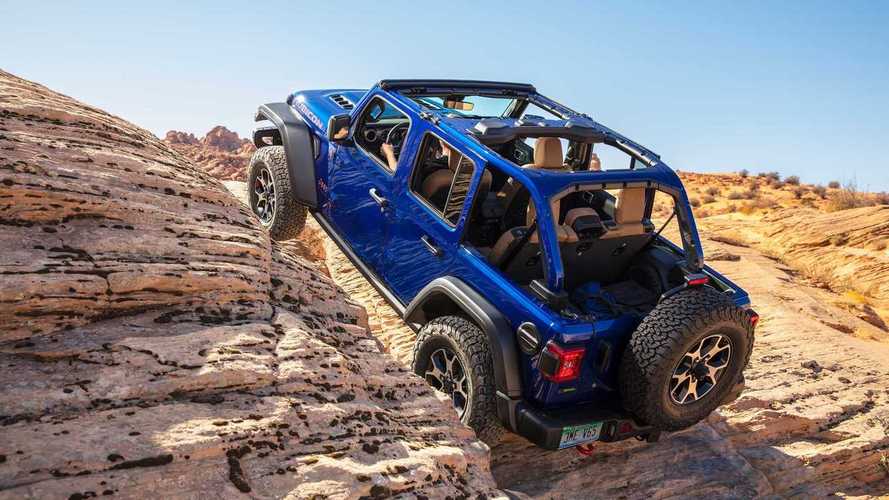