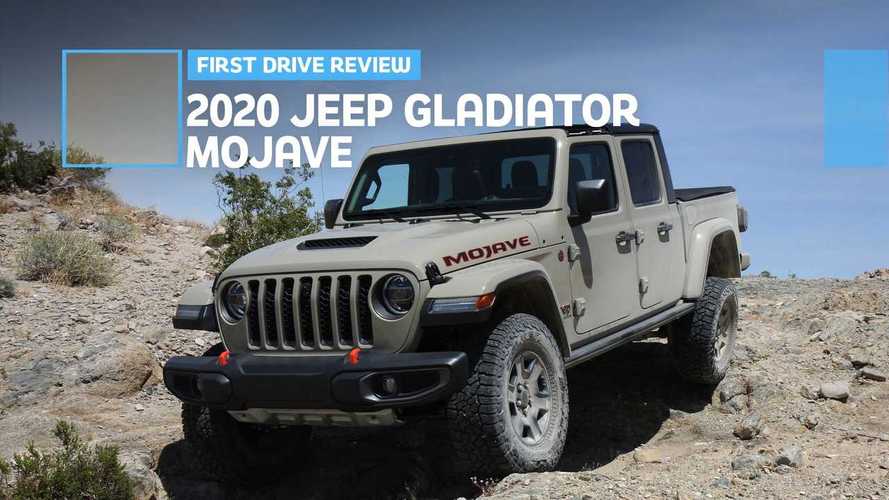 The 2020 Jeep Gladiator Mojave is a new kind of vehicle for Jeep, pushing the brand toward high-speed desert performance (as opposed to the mountain trails for the Gladiator Rubicon). That "Desert Rated" badge on the front fender promises lots of fun in the dirt, but does the Mojave follow through?

Priced identically to its rock-ready sibling, the Mojave gets a 1-inch-higher ride height, Fox 2.5-inch internal bypass shock absorbers, and cast-iron (instead of aluminum) suspension knuckles. Those heavier bits compromise on-road and low-speed off-road performance in favor of greater dependability in high-speed off-roading. And both top-spec Gladiators get heavy-duty Dana 44 wide axles front and rear, with 10-millimeter wall thickness that’s reportedly overbuilt on the Rubicon because it was crucial to the desert runner.

What’s more, the Mojave jettisons the Rubicon’s locking front differential and ultra-low-range transfer case in favor of an open forward diff and numerically lower gear ratios. While that may seem like a step in the wrong direction insofar as capability is concerned, Jeep says the changes help the Mojave thrash more quickly and nimbly in 4-Low, since high wheel speeds are a good thing for sandy driving. With low range selected, the Mojave can hit speeds of about 50 miles per hour, up from 30 mph in the Rubicon.

So how’s it all work? We hit Southern California’s Soggy Dry Lake to find out.

The Gladiator Mojave’s taller ride height is less to provide added ground clearance and more for increased suspension up-travel when hitting obstacles at speed, and on this wise, the truck moves beautifully. Soggy Dry Lake’s pock-marked surface made a good place to test the suspension’s mettle, and the Mojave absorbed surface imperfections, undulations, and small bumps at 50 or 60 mph with only a little drama. Higher speeds on the lake surface are legal, but we kept the Jeep reined in to preserve its clean-title status.

Of course, it’s not quite the high-speed Baja truck that the Ford F-150 Raptor is, in part because Jeep hamstrings its truck with a slightly wheezy 3.6-liter V6 that makes 285 horsepower and 260 pound-feet. In addition, the Raptor’s suspension – which also features Fox dampers – is better at absorbing bumps without upsetting the rear axle, reducing sway and improving straight-line stability. Some credit goes to the Rap’s much wider stance, which turns into a liability when the trail narrows.

But when the going gets tight, the Mojave serves as a lovely go-between for the rugged Jeep Rubicon and the larger Ford, offering good maneuverability and exceptional front and rear sightlines. The narrow hood, separate fenders, and high seating position conspire to make this a rather pleasant vehicle in which to off-road solo. Increased ground clearance also pays dividends in rocky driving, and our somewhat difficult trail selection was no match for the Mojave’s perfectly adequate 2.72:1 low-range transfer case. Still, there’s no getting around the Gladiator’s dreadful breakover angle of 20.9 degrees, even with the added ride height. We dragged the belly once or twice across obstacles that would have been no sweat in a Wrangler Rubicon.

Amping up the Gladiator’s fun off-road demeanor is its removable roof. Our tester came with the optional three-piece hard top ($1,195), which includes two “Freedom panels” over the driver and front passenger. With these panels removed and the windows rolled down, the Mojave becomes an excellent altar for solar worship, and a soft-lined storage bag makes it easy to bring the T-tops along for when sunburn sets in.

Removing the rest of the hard top is a bit of a task, so some Jeep fans might still prefer the folding soft top. But the Freedom panels provide easy al fresco access without sacrificing the hard top’s surprisingly decent sound and wind insulation. Of course, devotees to the great outdoors can remove all four doors and each top component and leave them at home. Your fair-skinned author wasn’t quite that brave.

Most Popular Truck In The Neighborhood

Few new vehicles attract as much attention as a Gladiator in any trim level, but the Mojave might as well be a lightning rod for gawking. Its slightly platypus-like proportions don’t seem to mute the public’s appreciation for the Jeep truck, inviting a thumbs-up from a passing Harley rider, a bright smile and wave from an older gal driving a Wrangler YJ, and at least two or three gas station interactions each time we refueled.

Few new vehicles attract as much attention as a Gladiator in any trim level, but the Mojave might as well be a lightning rod for gawking.

Those removable doors and roof panels make the Jeep a pretty delightful place to while away a daily commute. And the Gladiator’s interior, shared with the Wrangler, is as thoughtfully and playfully styled as its exterior. Jeep Easter eggs abound, including topographical-map inscriptions and an animated Willys MB that appears on the instrument cluster display. It’s always fun when manufacturers take themselves less seriously and give those little treats to their owners.

Dynamically, though, this truck is flawed. A coil-sprung, five-link suspension all around does its best to hide the Gladiator’s solid front and rear axles, but there’s no getting around decades-old technology. The front and rear Dana 44 logs, although excellent for off-road articulation, mean that if one wheel encounters an obstacle, the whole pickup feels it. It’s a compromise Jeep makes for good performance in the dirt, so we’re inclined to give out a mulligan.

The steering is another issue. With abundant rear-axle sway in even sedate driving maneuvers, working the helm is a full-time job, requiring constant course corrections on the freeway and in canyon twisties. We can forgive the latter, since not many people will cane their Gladiators on Angeles Crest Highway, but the former seems to be a bit of a liability unless your commute is short and your off-road playground is literally in your backyard.

And the nearly vertical (and charmingly foldable) windshield does nothing for aerodynamics, sapping both freeway coasting momentum and fuel efficiency. In our week with the Gladiator that admittedly included lots of off-roading, we achieved about 16 miles per gallon. That’s down quite a bit from its EPA ratings of 17 mpg city, 22 highway, and 19 combined.

Credit where it’s due, all four outboard seats are comfortable and supportive, and there’s ample head and legroom for four passengers. However, the interior’s compromised width – gotta keep those trail-friendly proportions! – means that the front toe boxes are a bit narrow for big feet, and three-abreast rear passengers have to stagger their shoulders. And the bed, while more spacious than any Wrangler’s cargo area, is short and shallow. Adventure gear will fit just fine, but don’t plan on hauling many yards of gravel or bales of hay.

On-road, the available eight-speed transmission (a six-speed manual is standard – yay!) does an excellent job of managing the 3.6-liter V6’s torque deficit such that driving around town is a pretty pleasant experience. On the open road, maintaining 70 miles per hour requires a fair amount of downshifting from the gearbox, sapping fuel economy. But the Jeep nevertheless keeps up with modern traffic just fine, and even with its shortcomings, it’s still pretty fun to drive.

As an off-road plaything with compromised daily-driver appeal, the Gladiator Mojave is a rather pricey proposition. Our tester, painted a muted, desert-ready Gobi shade of tan, carried a base price of $43,875. The most expensive addition on this Mojave is the aforementioned automatic ($2,000).

Leather seats add $1,475, and a larger 8.0-inch infotainment display costs $1,695 when bundled with navigation and Alpine premium audio. Blind-spot alert and rear parking sensors demand $995, while adaptive cruise control and full-speed forward collision prevention ask a reasonable $795. LED front and rear lighting should be standard given the terrible base halogen headlights, but nope – that’ll be a $1,045 option.

For the well-heeled, you can’t put a price on the coolness that the Gladiator has in spades, particularly in Mojave trim.

With a handful of other added extras, the grand total for our 2020 Jeep Gladiator Mojave is a heart-stopping $59,720. It’s not news to anyone that Jeeps are somewhat pricey, but nearly 60 large is a Raptor-sized wad of cash. Discounting the emotional reasons for buying a Gladiator, it’d be hard to justify spending that much on a truck that’s somewhat uncivilized in regular driving.

For the well-heeled, you can’t put a price on the coolness that the Gladiator has in spades, particularly in Mojave trim. Even the base trim, though awkwardly proportioned, is plenty capable, at a starting price of $33,545. And with all the fun of a convertible and all the capability of a truck, the hot little Jeep is really two vehicles in one. Try justifying it that way to a skeptical spouse, and if it doesn’t convince the better half, go for a high-speed blast across a dry lake bed. Trust us, that will definitely work.