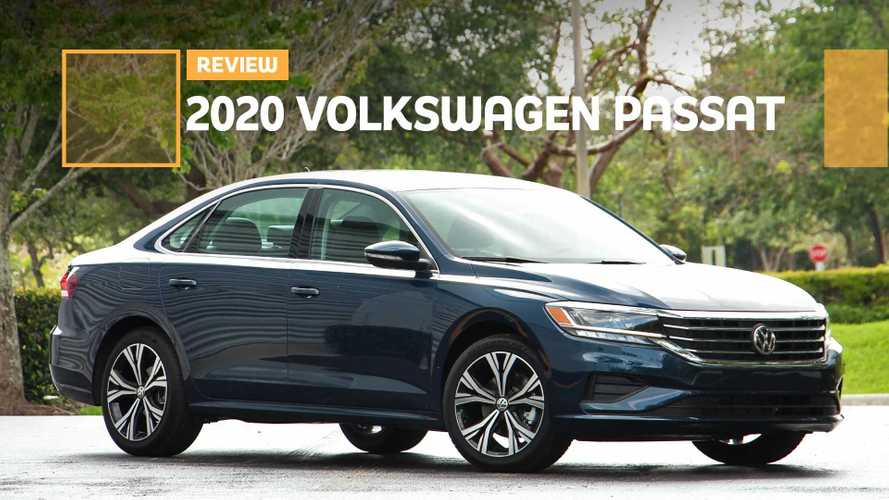 VW’s once-excellent sedan is now chasing behind its segment rivals.

There’s good news and bad news when it comes to the 2020 Volkswagen Passat. It’s been updated for this model year, which means new standard features and a sleeker look. However, in a segment where you want to play your best hand, the Passat’s facelift precludes it from the brand’s latest tech, which puts the midsize sedan miles behind red-hot competition such as the Hyundai Sonata, Honda Accord, Toyota Camry, and the new Kia K5.

At least the Passat is still relatively inexpensive – it’s actually cheaper than last year’s model. Plus, the run-of-the-mill sedan still has a huge backseat, which means it would work well for small families or as even as a ride-share vehicle, for example. But the Passat is still nowhere near our podium for best sedans.

Despite our tester’s pretty Tourmaline Blue metallic paint and ornate 18-inch wheels, the Passat is the absolute poster child for dull design. Toyota slapped a huge spoiler onto the Camry while Hyundai went nuts with the new Sonata’s lighting features... and Volkswagen’s rebuttal is an anonymous design devoid of any significance. Granted, the current-generation Passat has never been a design standout, but this iteration is desperately missing personality.

It’s much of the same inside, with a clean-but-mundane layout and pedestrian materials. A large section of low-gloss wood runs the width of the dashboard and looks nice, if a bit dated. Volkswagen’s typical center stack with HVAC and heated seat controls remains visually appealing, and there’s a spacious cubby beneath to charge phones with the USB port (not wirelessly) and store things. Similarly, the main pieces of cabin tech look like they’d be new in 2015.

Inside and out, the Passat’s design forgoes flair and chooses functionality. There’s nothing egregious to complain about, but nothing to conjure excitement, either.

As drab as the Passat’s interior is, it certainly is a comfy place to rack up miles. Our tester’s SEL trim brings real leather seating surfaces, dual-zone climate control, heated seats in the front and rear, and some fun ambient lighting. The front seats feel very similar to our long-term Volkswagen Atlas Cross Sport – firm, but supportive and comfortable. Both front thrones also get eight-way power adjustability and lumbar support on the SEL trim.

But the enormous backseat is the place to be. Those riding in the rear enjoy 39.1 inches of legroom, which fares quite well against the Hyundai Sonata (34.8 inches) and the Toyota Camry (38 inches). Rear seat air vents and two USB ports sweeten the deal even more, not to mention the huge door pockets for storage. We weren’t kidding when we said this would make a killer ride-share vehicle. Your passengers will thank you.

The extra space continues to the trunk area, which will easily accommodate multiple full-size suitcases. Volkswagen claims 15.9 cubic feet of space in the Passat, which loses to the Accord’s 16.7, but improves on the Camry’s 15.1. This segment is known for its big trunk space, and happily the VW fits right in.

Piloting the Passat is a mostly tame affair. The ride quality is supple, enhanced by a healthy amount of sidewall surrounding the 18-inch wheels. Only truly messed-up road surfaces startle the VW. Otherwise, it’s just as smooth as rivals from Japan and Korea. Our only major knock is the wind and road noise on the highway, which are more obtrusive than they should be.

This is probably the best time to remind you that the rest of the world also gets a new Passat, only theirs is much better. Built on a newer platform, the foreign Passat has a more modern cabin with a bigger infotainment screen, digital instrument cluster, and other perks. Meanwhile, the American Passat kinda phones it in.

Standard is a 6.3-inch touchscreen, though our car features the bigger 8.0-inch setup. The display size is nothing to brag about, but the interface is much slower and worse to interact with compared to other VW’s that we’ve tested. This mainly due to much longer lag time and generally slower response when scrolling between menus. Supporting the main screen is a teeny tiny display (which is also way down on size compared to other Volkswagens) between the analog gauges that shows the trip information. Competitors are pushing hard with more screen real-estate, making the Passat feel even less special.

At least VW throws in Apple CarPlay and Android Auto – we prefer either of those over the in-house navigation, which comes along for the ride at the SEL trim level. Lastly, we’ll tip our hat to the upgraded Fender sound system, which has great sound quality for this price point.

A turbocharged 2.0-liter four-cylinder powers the 2020 VW Passat and is good for 174 horsepower and 206 pound-feet. The engine mates exclusively to a six-speed automatic transmission, which sends power to the front wheels. This tried-and-true engine is a quiet, consistent performer. Power feels adequate; there’s enough grunt to get on the highway without worry and for quick overtakes, but never enough to make the Passat feel sporty. Even though it’s dated, the six-speed slushbox participates willingly and goes mostly unnoticed.

This car trades punches with a Camry XSE from a price standpoint, but comparatively, it handles much worse. The VW is set up for cruising, with overboosted, light steering and soft suspension.

Save Thousands On A New Volkswagen Passat 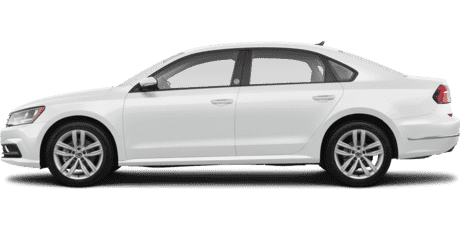 Among the Passat’s few standout qualities is a fairly robust suite of safety features. The base S trim (at $22,995) includes blind-spot monitoring and forward collision warning with automatic emergency braking and pedestrian detection. The SEL trim adds lane-keeping assist, adaptive cruise control, and active parking assist, which is supposed to parallel park the car automatically. During our week-long test, we tried using the automated function multiple times, but it never worked. That could easily be user error or a bug with this vehicle, but nevertheless, it’s still worth noting.

The VW Passat offers 23 city, 34 highway, 27 combined, which doesn’t stack up to its closest rivals. Other four-cylinder-equipped segment leaders like the Honda Accord shoot higher with 30 city, 38 highway, 33 combined, while the Toyota Camry nets 29 city, 41 highway, 34 combined, and the Hyundai Sonata 27 city, 36 highway, 31 combined. Unlike each of those cars, Volkswagen does not offer a hybrid variant of the Passat. The 2.0-liter engine is happy running on 87-octane fuel.

Considering the overall lack of fanfare, we can’t sit here and recommend the Passat SEL. Our car’s as-tested price of $32,015 is just too steep over the $22,995 base price. The optimal solution is likely the middle-tier SE trim, which adds adaptive cruise control and dual-zone climate control over the standard car.

Comparing apples to apples, a Toyota Camry with a comparable engine starts at $30,005, while a similar Hyundai Sonata Limited is $33,500. These are both better cars than the Passat, but the VW’s undercut base price will no doubt be appealing to some buyers.