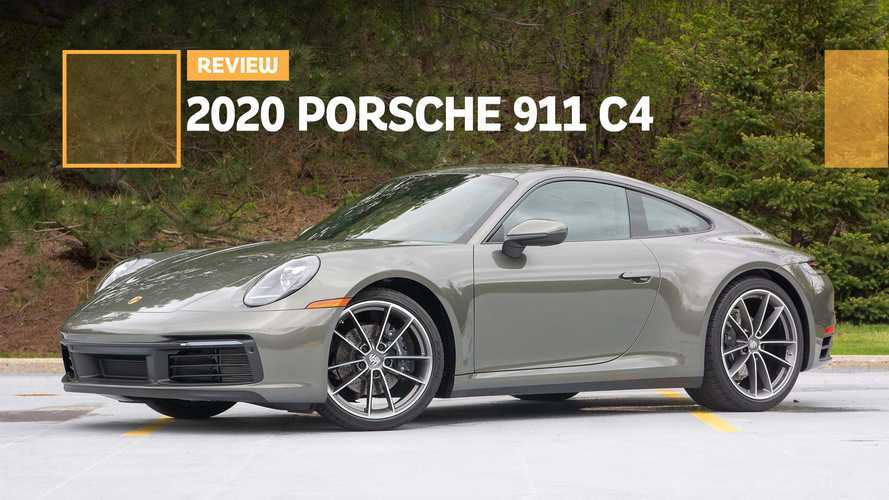 A base, all-wheel-drive Carrera is all most sports-car drivers need.

Enthusiasts like to paint a rosy picture of sports-car shoppers. Everyone drives the big, fire-breathing models with manual gearboxes, rear-wheel drive, and all the safety nannies set to OFF. The colors are lurid, the wings are huge, and the cabins spartan. But the real world, with its traffic, speed bumps, and only occasional opportunities for fun, has other ideas.

The 2020 Porsche 911 Carrera 4, with its standard all-wheel-drive system, is a sports car for the real world. It's fast, but never overwhelming. Agile, but still comfortable. And safe, but not too safe. You can have fun in this car every day without worrying its talents will overwhelm you or that its pace will land you in trouble with the law. It's a companion, rather than something that demands too much respect or talent. And for the lucky ducks in the market, those qualities far outweigh huge aero and stratospheric power outputs.

Well… it's a 911. Really, what else are we supposed to say about the exterior design? Porsche made yet another refinement of its flagship's iconic shape for the 2020 model year, making nips and tucks to keep the 911 looking fresh. The front fascia is more squared off, and there's an indent in the hood that harkens back to older models, while in back, a slim, vehicle-spanning LED strip pairs neatly with a new vertical light on the rear grille. The overall look is, in our eyes, still very attractive.

Our tester stands out, though, with an unusual (but beautiful) shade. Aventurine Green is an $840 option, putting it in the second and largest tier of Porsche's 911 color palette. This is a gorgeous color, with plenty of depth and a distinct Pacific Northwest vibe. It won't catch as many eyes as Python Green or Miami Blue, but we wholeheartedly dig this paint.

The 911's redesigned cabin is growing on us. The high transmission tunnel with its bank of touch-capacitive buttons is clean and attractive, although the stubby gear lever on our PDK-equipped tester still looks too much like an electric shaver. The horizontally focused dash, which integrates the 10.9-inch touchscreen infotainment system, has a strong minimalist style. And while wood isn't our first choice for a 911's trim, we adore the Paldao finish sprinkled throughout our tester's cabin.

The only weird element is one we've mentioned before – the 911's steering wheel obscures parts of the twin 5.0-inch displays. For all the thought Porsche puts into the 911's functionality, hiding parts of these displays, including the fuel gauge, feels like a weird misstep.

From the outside, the 911 is a small sports car. But the cabin is huge. You don't sit in the 911; you wear it like a big, comfortable hoodie. Our tester's 18-way front seats are a pricey option at $3,830, but it's hard to overstate just how adjustable the chairs are – the 911 boasts a perfect seating position. The hip point is low, and the powered tilt/telescopic steering can adjust the wheel right into your lap. Porsche doesn't provide interior measurements, but in terms of head, leg, and shoulder room, the 911's front chairs excel. The back seats, though, remain a place better suited for things than people.

The 911's ride is firm, as expected, with fixed dampers and staggered 20-inch front and 21-inch rear wheels. You'll feel bumps and imperfections, but the ride quality is also compliant – the 911 won't shield driver or passenger from the road, but it mitigates the worst impacts and does so in a manner that provides absolute stability and impressive feedback.

If you're really concerned about ride quality, skip our tester's optional wheels and stick with the standard 19-inch front/20-inch rear arrangement and their larger tire sidewalls. Porsche Active Suspension Management (PASM), which is standard on all 911 models, does its best to keep the big wheels in check with a selectable comfort mode.

Since the 911's engine sits where the trunk would go, it's forgivable to criticize the car's 4.6-cubic-foot frunk as being too small relative to the 12.6 cubic feet of total cargo space in, say, the new mid-engine Chevrolet Corvette. But that 4.6-cube spot is certainly larger than the frunk on the Chevy, and with the rear seats factored in, the Porsche actually has a 1.2-cubic foot advantage. Sure, some of that space is in the cabin, but there's little question the Carrera can carry more than the Corvette and its oddly shaped cargo holds.

We spend a fair amount of time driving Porsches around these parts, and even still, it takes a few minutes to reacclimatize to the car's tech suite, particularly for things like setting up individual drive modes. That said, once you understand the system, the 911's 10.9-inch touchscreen is very pleasant to use – it's responsive to inputs and quick to load new screens, with very pretty graphics.

The twin displays flanking the central analog tachometer are equally impressive to look at and even easier to manipulate via the scroller on the steering wheel. The right display is more helpful than the left, though, offering a wider range of screens to swipe through, including ones for navigation, mechanical status, audio and communications info, and on our all-wheel-drive tester, torque distribution.

If we had one suggestion for Porsche, it'd be to offer the same number of data screens on the left display, which is mainly home to a redundant digital speedometer (there's a small numerical display in the tach that's more useful) and odometer.

The 911 comes rather well equipped on the tech front, with the standard touchscreen offering Android Auto and wireless Apple CarPlay compatibility. A wireless hotspot is available with data provided by AT&T, which includes up to three gigabytes of data for the first three months of ownership.

Here's a controversial take: In terms of straight-line performance, there's no good reason to buy a Carrera S. Yes, an S is unquestionably quicker – the 4S can snap to 60 in 3.2 seconds with launch control (3.4 seconds without). But it only takes the Carrera 4 3.8 seconds. We drive a lot of high-performance cars around these parts, and we promise, you won't miss that difference on a regular basis.

And that's because the Carrera 4's twin-turbocharged 3.0-liter flat-six – the same engine as the 4S – still produces 379 horsepower 331 pound-feet of torque. And with peak twist available between 1,950 and 5,000 rpm, this engine is always up for a good time. The acceleration is effortless from a standstill on up to freeway speed, with the quick-revving flat-six seemingly always on maximum attack. If that isn't enough, though, simply tap the button in the middle of the drive selector dial for Sport Response, which makes the Sport Chrono-equipped Carrera 4 feel even snappier.

For now, every 911 Carrera 4 features an eight-speed double-clutch transmission. The PDK, to use Porsche's branding, remains one of the best two-pedal transmissions on the planet, able to blend into the background for commuting while ripping off blistering upshifts when set to Sport or Sport Plus. It's a delightful gearbox to work with the wheel-mounted paddles, which themselves offer a snappy and pleasant action.

Our tester carries the optional Sport Exhaust, so we'll reiterate one of our main tips when buying any Porsche: aside from the Sport Chrono package or a manual transmission, there's no option in the entire Porsche catalog that will make a driver happier than the Sport Exhaust upgrade. It gives the car a throatier sound at idle, and while underway, there's far more presence, with a richer note and higher volume. We recommend it unconditionally.

Since 2017, all 911 models have come standard with PASM, but unfortunately, until the inevitable Carrera T arrives, there's no way to get the less powerful 3.0-liter engine with equipment like the firmer-tuned PASM Sport Suspension. Our tester also wasn't equipped with Porsche Dynamic Chassis Control (PDCC), which functions like an active anti-roll bar. These two technologies take the 911 from a willing dance partner to a world-class one.

As it stands, though, the base car still offers impressive cornering behavior, with a neutral character and ample grip from the Pirelli rubber (optional 245/35/20s in front and 305/30/21s on our tester – 235/40/19s and 295/35/20s are standard). There's a limited amount of body roll, so as good as PDCC is, it's arguably less important than PASM Sport (although the latter is a prereq for the former). Steering is excellent, with predictable weighting and a tight on-center character, while feedback both through the chassis and the steering is high. You'll have higher dynamic limits in an optioned-up 4S, but the base Carrera 4 is still a hoot.

Our tester's all-wheel-drive system, meanwhile, is invisible until it's really needed. We appreciate that behavior in an occasionally snowy place like southeastern Michigan. If AWD is important, we recommend snagging the optional Porsche Torque Vectoring Plus system, which helps manage the power when accelerating out of tight bends.

Porsche offers a comprehensive active safety suite, but like so much else on this car, all that gear is optional. That said, you still get standard automatic emergency braking and an excellent set of LED headlights. Our tester also features blind-spot monitoring, a $1,060 option, although the 911's excellent sight lines make it feel unnecessary.

One feature we really appreciate in the 911 is its standard Wet driving mode. This sort of thing is common nowadays, although the Carrera is the only car we've encountered that can detect precipitation (via sensors in the rear of the front wheel wells) and suggest to the driver that they activate Wet mode.

Once engaged, the car feels more manageable in the wet, offering calmer torque delivery and a relaxed throttle response, along with earlier intervention from the active safety nannies. We appreciated the system's behavior in some seriously slippery conditions during our test – it made the all-weather Carrera feel just a bit more, um, all-weathery.

The EPA rates the 2020 911 Carrera 4 at 18 miles per gallon city, 24 highway, and 20 combined. As with all its open-top, more powerful, or two-wheel-drive siblings, it requires premium fuel, which saps its economy score slightly.

If you worry about fuel economy, the 911 C4 offers a best-in-class combined figure. That said, the Corvette and Lexus LC 500 – both V8 vehicles, but sans an all-wheel-drive system – best it on the highway with 27 and 25 mpg highway, respectively. The 911 is more efficient around town, though, beating the Chevy and Lexus by three and two points, each.

The black leather interior carries a $4,530 premium, while the 18-way seats, sport exhaust, and staggered Carrera Classic wheels add $3,470, $2,950, and $2,450, respectively. The must-have Sport Chrono pack rings in at $2,720, while lesser options, like the Paldao wood trim, Aventurine Green paint, ventilated seats, and blind-spot monitoring round out the upgrades for an as-tested price of $128,400, including a $1,350 destination charge.

Competitors mostly undercut the 911, with the Corvette doing so most – it starts at a scant $59,995, while fully loaded examples still land a few thousand below our tester's starting price. The Lexus LC is closer, but it still represents a significant savings at $92,950. The Porsche does slide in below the Mercedes-AMG GT, which demands at least $115,900.

Criticizing the 911's starting price is valid, but there are few cars at this price point that offer such a range of customization (and the ability to rapidly inflate the base price). If getting a car exactly as you like is important, the 911 represents a relative value compared to much pricier boutique brands.

Correction: A previous version of this review indicated our tester was not available with Porsche Active Suspension Management. This was incorrect. PASM and adaptive dampers are standard on every 911. PASM with a Sport Suspension is limited to the Carrera S. The article has been updated to reflect this information. We regret the error.