Find out what Nationwide reviews from customers have to say.

By: Will Moore
Listen to this article

In our Nationwide insurance review, we rate the company 4.3 out of 5.0 overall and compare its average costs to other competitors in the market.

Founded in 1926 in Columbus, Ohio, Nationwide started as a small mutual insurance company supported by local farm bureaus. Today, it is one of the biggest auto insurance companies in the United States. We’ll take a close look at Nationwide insurance reviews, coverage options, and costs to see how it compares to competitors.

We recently compared the best car insurance providers across the country, including Nationwide. If you’re on the fence about Nationwide auto insurance, read on to learn everything you need to know before signing up.

Nationwide has a high rating of A+ from the BBB but does not stand out when it comes to customer service. The company doesn’t rank well in the J.D. Power 2021 U.S. Auto Insurance StudySM. According to Nationwide insurance reviews, customer care can vary depending on your location. Be sure to read local reviews if you're considering a Nationwide car insurance policy.

If local Nationwide insurance reviews are good, a Nationwide auto insurance policy is worth consideration. We found that Nationwide's prices tend to be higher on average but can be relatively cheap for older drivers as the insurer offers discounts for AARP membership.

In addition to seniors, the following types of drivers may find the best coverage with Nationwide car insurance:

Overall, we rate Nationwide 4.3 out of 5.0 stars and name it Best for Seniors based on its extensive auto insurance coverage, high ratings from industry experts, and well-reviewed usage-based insurance program. Nationwide insurance reviews from customers also factored into our rating.

When you're shopping for auto insurance, we recommend comparing quotes from at least three providers. 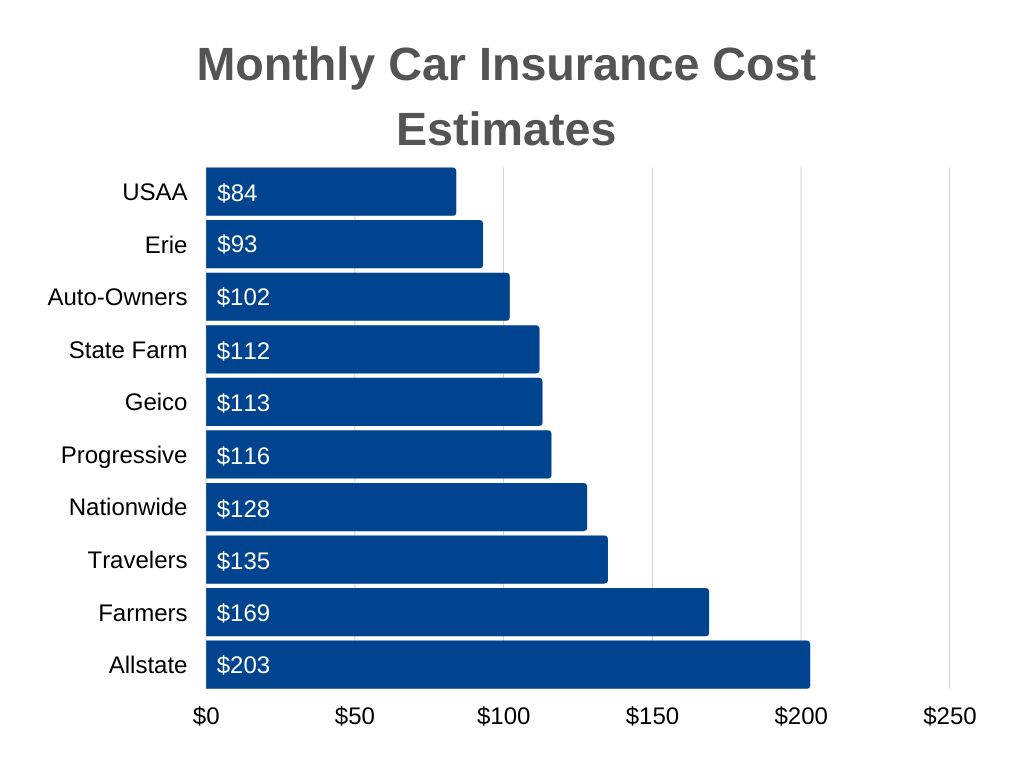 According to our rate estimates, good drivers pay an average of $1,533 per year for full coverage with Nationwide. This is cheaper than the market average of $1,732 per year. Here's how Nationwide stacks up against other leading insurance providers.

As with every car insurance company, Nationwide rates depend on the driver. Nationwide insurance reviews attest to this. In addition to the amount of coverage you choose (minimum coverage is cheaper than full coverage), your auto insurance payments may be affected by:

We surveyed 1,000 car insurance customers on a variety of topics including cost. Overall, 33 percent of Nationwide customers said they have experienced rate increases without an obvious cause. This was the lowest percentage of any provider.

Here's how Nationwide costs can vary depending on your driving background compared to the national average rates:

The table below shows Nationwide quote estimates across the country. While Nationwide is typically not the cheapest provider in every state, rates are competitive and often below state averages.

The estimates below are for a 35-year-old driver with a clean driving record and good credit. Keep in mind that these estimates are for a particular driver profile meant to give a general idea of Nationwide costs. Your rates will vary. If you are younger, have poor credit, or have points on your license, your rates will likely be higher.

Most drivers qualify for at least one of Nationwide’s discount plans. Here are some of the ways policyholders can save money:

Nationwide auto insurance comes with annual On Your Side® reviews. This service has an insurance agent check in with you once a year to make sure you fully understand your policy and ask if you want to make any changes.

In addition to the full coverage options listed above, you can get the following types of coverage and policy add-ons with Nationwide:

If you have a classic car, you can also get Hagerty classic car insurance through Nationwide. Coverage includes flexible mileage, guaranteed replacement value, spare parts, and more.

According to the National Association of Insurance Commissioners (NAIC), Nationwide is one of the top 10 most popular homeowners insurance companies in the country. The company offers a discount of up to 20 percent for bundling home and auto. You can find all the standard home insurance options to cover physical damage, personal belongings, loss of use, liability, and more.

Nationwide can cover all the life insurance bases with whole, term, universal, or variable life insurance. Each of these can apply to different life situations, like leaving an inheritance for heirs or providing security while raising children.

Reading firsthand reviews of insurance providers is a great way to look into the experience of working with the company after the quotes process.

How do Nationwide customers feel about their long-term relationship with Nationwide? We scoured both national and individual location reviews for some insight. Positive Nationwide reviews highlight exemplary customer service representatives, while negative reviews discuss rate increases and issues with the claims process.

“The customer service is very personal. I was able to get the plan and [coverage] I wished. Gerry was amazing and worked with me even when I wasn’t able to commit right away. Staff and company looked nice and performed professionally.”

– Vanessa B. via Google

“[My agent] even calls me to inform me that there are some items that [need] review. And the review usually saves me money. He is always prompt to return calls and answers all questions very clearly. I feel that I am in the best hands with Abe and Nationwide.”

– Craig I. via Google

Not all Nationwide insurance reviews are positive. Here are a couple of examples from customers who were disappointed with the company.

“My rates went up significantly after receiving my first bill. I was baited and switched. Be [wary] of this company, as they did not honor a refund of the amount and had promised my rate would not change. They made an error in the application, and I ended up paying for it.”

– Reviewer in Plano, TX, via Google

“This company has to be the [worst] to deal with! I was not [asked] to be hit by their customer, and all I want is my car to be fixed. They have been no help in dealing with the body shop. They also are denying fixing my car the way it should be. I should not have to get a lawyer involved for a simple accident.”

Nationwide claims satisfaction is mixed, and reviewers on the BBB website report both positive and negative experiences. Negative claims service reviews mention unresponsive or rude adjusters. Some customers also say different agents give out different information. On the other hand, some reviewers experience good customer service and friendly agents.

Nationwide has received 200 complaints in the past three years on the BBB website. Looking over the most recent 100 complaints, the majority have to do with the claims process. According to drivers, the process to get a damage appraisal can be slow. Some people also experience a lack of communication with agents.

To cancel a Nationwide insurance policy, contact your agent. If you don't have an agent, call the company at 877-669-6877. You can cancel your policy effective immediately or schedule a cancellation. Make sure you have other insurance in place if you still own a car.

Like most modern insurers, Nationwide offers its customers a smartphone app (Nationwide Mobile) that can be used to view policy details, manage payments, and file insurance claims. The app has a 4.4 out of 5.0-star rating on the App Store from over 9,700 reviews. Similarly, over 6,800 Nationwide insurance reviews on Google Play rate the app 4.2 stars.

In addition to Nationwide Mobile, Nationwide has SmartRide®, an app that tracks driving habits and offers discounts. SmartRide has a 4.4 out of 5.0 rating in the App Store and a 4.0 out of 5.0 rating on Google Play. This program is available in all states except for Alaska, Hawaii, Idaho, and Louisiana.

Several user reviews that we examined complain about the SmartRide app. Drivers are frustrated that the app penalizes them for idling. Most top insurers offer usage-based discount programs that are managed through smartphone apps, though few seem to have worked out all of the kinks. Nationwide’s app is middle-of-the-pack based on customer reviews. SmartRide is rated higher than Geico’s DriveEasy app but lower than State Farm’s Drive Safe & SaveTM app.

Two companies often compared to Nationwide car insurance are Geico and Progressive. After we did our homework, both came out slightly ahead of Nationwide with 4.6 out of 5.0 stars each, and we recommend reaching out for quotes to see what your policy coverage and cost would look like.

Comparing Geico and Nationwide, Geico is much larger, holding an impressive 14.31 percent market share of the car insurance industry, according to the NAIC. Here are some of the things we like about Geico:

For more information, check out our full Geico review.

Progressive auto insurance also ranked highly in our review, earning 4.6 stars overall. It offers many similar programs to Nationwide auto insurance, including a device that tracks your driving habits and an online program that helps you find the best price for your lifestyle. Other notable perks include:

For more information, check out our full Progressive insurance review.

It’s easy to get free quotes from many car insurance companies before making your final choice. Consider your options before choosing the company that’s best for you.

Is Nationwide a good insurance company?

Based on our review of the top auto insurance companies on the market, we believe Nationwide provides reliable insurance and we rate it 4.3 out of 5.0 stars. Nationwide also has an A+ rating from the BBB and an A+ financial strength rating from AM Best.

What is the rating of Nationwide insurance?

Nationwide has an A+ financial strength rating from AM Best and an A+ rating from the BBB. We rate Nationwide 4.3 out of 5.0 and rank it among the top 10 insurance companies in 2022.

Is Nationwide insurance going out of business?

Nationwide is not going out of business. In 2020, Nationwide transitioned from a captive agent model to an independent model, which means its agents can sell policies from other companies. Nationwide is still selling its own coverage in full force.

Are Nationwide and Progressive the same company?

Nationwide and Progressive are not the same company. However, Nationwide’s agents are independent and can sell plans from other companies, including Progressive. In 2021, Nationwide had 2 percent of the market, while Progressive had 14 percent.

Is Nationwide good with claims?

According to the J.D. Power 2021 U.S. Auto Claims Satisfaction Study, Nationwide performs slightly worse than the industry average for claims. It scored 876 out of 1,000 on the study, while the average score was 880.

Nationwide does not typically have the cheapest car insurance rates, according to our cost data. However, Nationwide's rates in most states are below average, and it offers many discounts.

What kind of insurance is Nationwide?

Nationwide offers a wide variety of insurance products, but it's most known for car insurance and homeowners insurance.

In an effort to provide accurate and unbiased information to consumers, our expert review team collects data from dozens of auto insurance providers to formulate rankings of the best insurers. Companies receive a score in each of the following categories, as well as an overall weighted score out of 5.0 stars.

Auto Insurance Quotes: Best Providers And Where To Get Your Price

How To Get Car Insurance Quotes In Colorado

Our Review of AIS Auto Insurance

Read our other insurance articles: