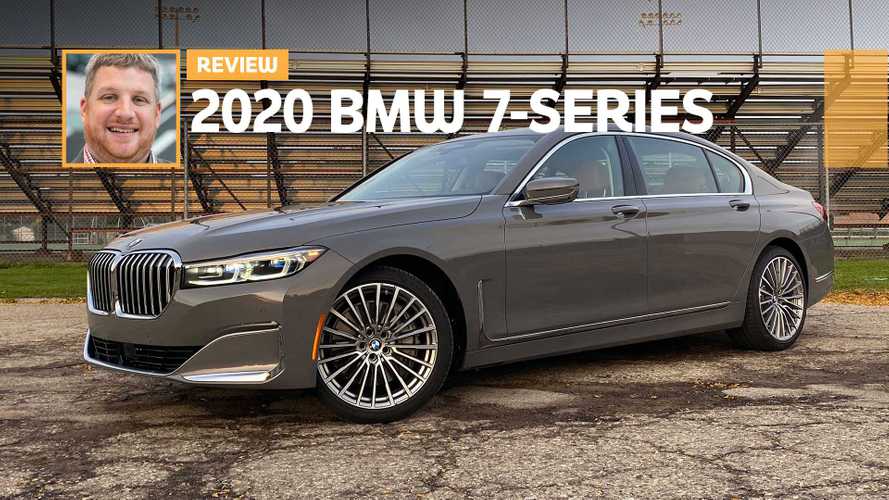 The 7’s new schnoz isn’t great, but it doesn’t spoil the rest of the package.

The BMW 7 Series is in an awkward place. The German brand’s biggest sedan has long served as its flagship, featuring the latest, most advanced technology. That hasn’t changed for the updated 2020 model, but the BMW stable certainly has with the arrival of the new three-row X7 SUV. So has BMW adjusted the role of the 7 to account for the arrival of its high-riding, brood-hauling counterpart?

Not really. The 750i takes everything BMW knows and does well and distills it into a hulking sedan. On the flip side, the X7 has rubbed off on the big sedan; most notably with a garish grille that dominates the 750i’s previously attractive face. Fortunately, you won’t see that massive face from behind the wheel, where the 7 Series experience remains as impressive as ever.

So, let’s talk about that grille. It’s bad. Egregiously so. It’s so hideous that I took to parking the 7 Series in such a way that whenever I walked out to it, I didn’t need to see this car’s gaping, twin-kidneyed maw.

The grille is a shame, because the rest of the 7 Series is quite attractive. The slim taillights and the theatrical way the LEDs in them light up when unlocking the car feels befitting of a flagship luxury sedan. The side profile, too, with its long chrome strip and attractive finish around the rear of the air curtain – that silver vent behind the front wheel – adds some flare without feeling overdesigned, which might be the case with some garish character line. Even the front, hideous grille aside, is nice. The headlights are handsome, especially with the blue accents of the Laserlight LEDs. In general, BMW’s use of chrome is classy, appearing low on the front fascia, side profile, and rear bumper.

That said, the 7 looks incredibly substantial. It’s like the BMW M8 GTE meme that popped up in endurance racing earlier this year. This car just looks incredibly big, even for its class. It’s a hard thing to get over.

The 7’s cabin is loaded with high-quality materials. Beautiful leather and attractive stitching abound, while designers liberally sprinkled real metal accents and handsome, warm wood throughout. While the material quality is unquestionably high, the cabin of this $126,000 750i feels, design wise, kind of plain. It’s not a bad design, but the 7 Series’ overall interior design is far less forward thinking than its two than main competitors, the Mercedes-Benz S-Class and Audi A8.

The S-Class has that massive surfboard-like slab of screens, neat air vents, and cool wood trims while the A8’s double-stack of touchscreen displays feel like the “future.” You want to get in and explore those interiors. But the 7 Series just kind of exists as this place that’s boring albeit well built and expensive-feeling.

And while it’s not a category Motor1.com awards points for, it’s nice to see BMW offer the 7 with such an impressive range of no-cost exterior paints and interior design options. There are 13 paints, six shades of upholstery, and six interior trim options available free of charge.

Boring though this cabin may be, it’s still a very, very comfortable place to be bored. The front seats have 20-way adjustability, three-stage heating, and in the case of this tester, eight different massage settings with three intensity levels and three-stage ventilation. If you can’t get comfortable behind the wheel of a 7 Series, you can’t get comfortable anywhere. But what really impresses with these seats is that they strike the right balance of sporty support and luxury car couchness. You can plop down and sprawl out. They’re ideal.

The backseats are even more so, thanks to this tester’s $3,900 Luxury Rear Seating package. Believe it or not, this is only the middle-tier seating option, slotting in between the basic bench and the Rear Executive Lounge Seating package, but that doesn’t make it anything less than impressive. Six-way power seats, three-stage heating and ventilation, a memory function, and the same massage setup as the front chairs make the back of the 7 easy to lounge in. Throw in this test car’s rear-seat entertainment system and a middle seat that flips down to reveal a 7.0-inch Samsung tablet that pops out of a holster, and whoever ends up in the back of the 7 will be thoroughly pampered and entertained.

Regardless of the seat you choose, the 750i exhibits excellent sound control. Wind, road, and tire noise are virtually nonexistent, and the twin-turbocharged 4.4-liter V8 really only intrudes when the driver stands on the accelerator pedal (it makes a fine sound, too).

As expected of a huge luxury sedan, there’s plenty of storage space. The 7 has an impressive center console (that includes heated covers, so the driver’s right elbow stays warm), a wireless charging pad just ahead of the cupholders, and decently sized door cubbies. There’s 18.2 cubic feet of space in the trunk, which is more than enough space for four sizable suitcases.

As BMW’s flagship, the 7 Series is a technophilic marvel of cutting-edge gear. At the same time, there’s little about the 7 that calls out its advanced nature.

The tablet-like touchscreen on the dash spans 10.3 inches and it looks and feels as snappy and graphically pretty as any other modern BMW product. The iDrive 7 operating system remains likable and easy to figure out, although it feels like this and the previous generation of the system took a step backwards from the simplicity of iDrive in the early 2010s. That system relied more heavily on the now almost redundant buttons that surround the control knob – now, it’s just super easy to switch from, say, the audio to the navigation on the main reconfigurable home screen. This new OS is undeniably more modern and offers a broader range of customization, with its reconfigurable home screens, but it lost some of the intuitiveness of the older system.

There’s been plenty of ink spilled moaning about BMW’s tendency to nickel and dime customers on optional content in the past, but the 7 stands out due to just how much equipment comes standard. Every 750i includes 20-way multi-contour front seats, a 16-speaker Harman Kardon audio system, an all-digital 12.3-inch instrument cluster, the aforementioned 10.3-inch touchscreen, navigation, Apple CarPlay, a head-up display, adaptive cruise control, a heated steering wheel, four-zone climate control, and a wireless charging pad.

There once was a time that BMW’s products were the best driver’s cars in their respective segments. That time has passed, although in this case, it’s not the fault of the powertrain engineers.

That’s a lot of power, even for a 5,000-pound sedan. Except that the 750i doesn’t weigh anywhere near what its visual mass and level of tech might indicate – it tips the scales at a scant (for the class) 4,722 pounds. It’s lighter than its competition by as much as 183 pounds. Thank the liberal use of carbon-fiber-reinforced plastic, aluminum, and magnesium in the car’s construction.

A low curb weight and class-leading power conspire to get the 750i to 60 miles per hour in just 3.9 seconds, or six tenths faster than its closest rivals, the V8-powered A8 and S560, which both do the deed in a leisurely 4.5 seconds. Tell the 750i to move to flank speed and it’ll blast past just about anything that doesn’t wear its respective manufacturer’s high-performance badge.

Helping with that task is a standard all-wheel-drive system, which gets the engine’s juice from an eight-speed ZF automatic transmission. This is a fine pairing, providing what feels like insurmountable grip in dry conditions and predictable behavior with rapid, smooth upshifts.

If you were waiting for a “but,” here it is: while the 750i accelerates like the (relatively) lightweight sedan it is, it corners like one that weighs twice as much. Or, at least we think it does. To be entirely frank, the 750i’s steering and chassis provide virtually no feedback. During testing, I had absolutely no idea what the 7’s front tires were doing through corners, and like the X5 I tested just over a year ago, that made it impossible to judge corner entry speeds. Isolation is good in a luxury sedan, but BMW needs to take it down a notch.

A big culprit, I suspect, was this tester’s active and four-wheel steering technologies. At high speeds and while traveling in a straight line, all is well – the 7 is impressively composed and stable. But ask the sedan to attack a bend with any kind of verve and things go to pieces. There’s virtually no sensation from the steering wheel, and the only way you can tell your actions are having results is by looking out the window. Body roll, despite this tester’s active roll stabilization, is weirdly pronounced, too. If you’re the sort who will get chauffeured about in your 7 or have taken a vow of celibacy on aggressive cornering, you’ll love this car. If you’re looking for the iconic BMW handling experience, prepare for disappointment.

That said, you can’t get the so-called Integral Active Steering without grabbing the Active Comfort Drive system. Like a few other adaptive suspension systems, it uses cameras to scan the road ahead and prep the suspension to absorb bumps and imperfections. The result is an impressively comfortable ride. What the 7 lacks in agility and feedback, it makes up for with stunning ride comfort.

This is BMW’s flagship sedan, so much like in the tech department, it’s available with almost every active safety system in the automaker’s quiver. There are the usual culprits, like automatic emergency braking and adaptive cruise control, but the real goodies are all squared away in the extremely affordable (relative to the 750i’s $102,650 starting price) Driver Assistance Professional package.

At just $1,700, this is the pack to get if you want the safest, smartest BMW on the road. It includes the automaker’s Active Driving Assistant Pro, which packages hands-off, semi-autonomous driving technology during traffic jams with steering and lane assistants for increased comfort and stability at highway speeds. The other technology in this suite, the Extended Traffic Jam Assistant expands on the Active Driving Assistant Pro’s traffic jam technology, helping with steering inputs up to 40 mph. All together, these systems make the 750i an absolute darling to live with on congested highways.

Rounding out the 750i’s perfect safety rating are a pair of excellent headlights. BMW’s no-cost adaptive LEDs are quite good, but the real deal are the so-called $1,000 Icon Adaptive LED Laserlights, which are far brighter and more efficient than the standard LEDs. Unfortunately, these lights aren’t as capable as their European counterparts, offering less power, no anti-dazzling technology, and only coming into play when the high beams are engaged. Thank the federal government’s antiquated motor vehicle safety standards.

The 2020 750i returns EPA estimated fuel economy figures of 17 miles per gallon city, 25 highway, and 20 combined and requires premium fuel. If efficiency is top of mind then BMW also offers a six-cylinder 740i that returns 22 city, 29 highway, and 24 combined mpg and a 745e plug-in model that, while actually less efficient at 22 combined mpg, offers 16 miles of electric range and a rating of 56 mpge when fully charged.

Despite the 750i’s added power, its 4.4-liter is more efficient than the less powerful 4.0-liter in the Audi A8L, which returns 15 mpg city, 23 highway, and 18 combined. The Mercedes S560 bests its arch-rival with its 21 mpg combined and 27 mpg highway ratings, while tying the 750i in the city.

If you’re considering the $4,100 Autobahn package (integral active steering, which is bad, and Active Comfort Drive, which is good), though, make sure you drive one car with it and another without it before plunking down a check.