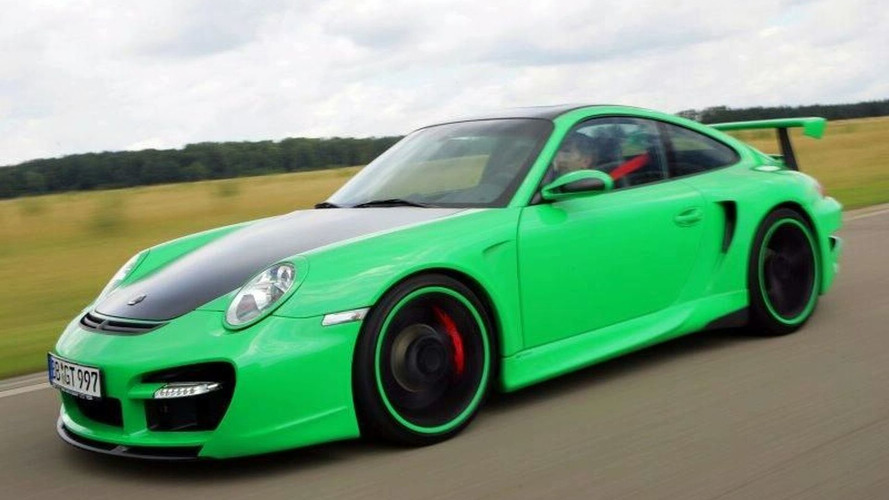 ...despite the lairy green colour scheme and brooding sense of violence, this is actually the most sophisticated machine to emerge from the Leonberg firm.

It took just one lap of the Malmsheim test track that has become something of a second home in recent months to show that despite the lairy green colour scheme and brooding sense of violence, this is actually the most sophisticated machine to emerge from the Leonberg firm. In the Porsche 997, the TechArt GT Street has come of age.

The 996, the first incarnation, was a Rottweiler, a whirling dervish of kinetic energy that felt like stepping on a detonator with every touch of the right foot. Now, with VTG technology it’s much faster, but it’s so much more drivable that this is now a 630bhp 911 Turbo you could use every day.

Following TechArt's all-round nice guy and top PR bod Ralph Niese through Stuttgart in search of a location for dramatic pictures would have been a nightmare in some tuned cars and a real demonstration of how but not this one. Driven on a trailing throttle it feels every bit as pliant as the base model Turbo.

Even on the airfield it feels measured, easy and relaxed, despite the needle racing past the 150mph mark like it was being chased by a starving lion.

This machine is now good for 214mph and will storm through the 60mph mark in 3.2 seconds, which is a massive 0.5s faster than the standard manual Turbo and it hammers through the 125mph mark in just 10.9s. So this comfy, usable 911 will rival the Carrera GT through the gears and the price tag of EUR 245,000 seems almost reasonable with those numbers - and the work that has gone in to producing this Kermit-green beast.

New VTG-equipped turbochargers, a new airbox, high-performance manifolds, intercoolers and a stainless steel sport exhaust system, together with a new engine management system, all help to crank up the horsepower to unreasonable levels and bless the car with an epic 605lb/ft of torque – that’s about a 25 per cent boost over the standard car. TechArt is one of the first to truly stabilise 650bhp in the Turbo, which will raise some sniggers amongst those in the know.

The Leonberg firm is currently embroiled in an industrial espionage scandal involving engines disappearing from Porsche’s development centre at Weissach. Hopefully this is one of those things that will simply go away, although Porsche is hanging on to the issue like a particularly rabid dog, as with the VTG system the firm’s headline car has taken a quantum leap forward.

This car should have been ballistic, it should have felt dangerous, but there’s just a never ending, linear shove from 1500rpm right through to 7000. There’s no impending sense of doom, the clutch isn’t brick heavy and even the gearshift, though it’s notchier thanks to the TechArt short shifter, is precise, simple and doesn’t require serious muscle to jam it in the next gate for the next wave of acceleration.

As for the outside, well its certainly loud and unmistakably a TechArt, with the gaping front scoops and holes in the rear that could, to my eye at least, do with meshing in to complete the look. Ralph’s offer to just drive the car into the river was, we hope, in jest, because apart from that miniscule thing you could rectify at home this car is a real work of art and the wind-tunnel development that the big sellers go through is a rarity in the tuning world. Most aerodynamic kits offer no more downforce than gravity: TechArt’s genuinely work.

The front fascia with a retractable carbon-fibre splitter helps high-speed stability and forces more air to the engorged radiators and oil coolers. TechArt also fits auxiliary headlamp units with daytime running lights and foglights, too, not just for the looks when standing still but for that ‘rear view mirror’ effect. When this thing comes up behind you, you’ll move and you know it.

Wider front wings add 10mm to the car’s width to give it an even butcher look, and there are new side skirts, a roof spoiler and more. That rear diffuser in carbon-fibre helps add more downforce and suck this 1650kg beast to the floor and other touches include the enlarged rear air intakes to feed the turbochargers and you could stare all day at the little touches: the wing mirrors, the perfect green RS-style paint job, the matt black bonnet, it’s all expertly finished and way beyond what you’d normally get from a tuned car. Yes it’s expensive, but then this is as good a 911-based creation in terms of fit and finish as Porsche could make themselves.

And it handles, oh yes does it handle. Thanks to a suspension set-up that is potentially more advanced than the all-conquering PASM. The chassis lowers by up to 25mm with the push of the Sport button, but the dampers are adaptive even under normal conditions and will respond to enthusiastic driving by firming up the corners and preventing any pitch and wallow.

The airfield was the place to truly push the car, though, while annoyed Mercedes film-makers carried out sound checks for a film we were throwing the GT Street into bends and finding a whole new balance and a car that has left the boring world of the 911 Turbo’s characteristic understeer long behind.

With four-wheel drive there’s an inevitable push as the front gains traction and pulls the car from the bend, that’s what Porsche says anyway. But the Audi R8 and now the TechArt proves that safe doesn’t always have to equal dull. As the TechArt heads into a sharp bend the back end slips rounds rear drive-style, before the computers kick in and take the car in a neutral to oversteer stance through the whole bend. Pushing it into deep oversteer still takes some skill, but whereas the standard Turbo refuses to budge a monkey could slide this one, a little bit.

They could stop it, too, thanks to the uprated steel brakes that come with dinner plate size 390mm front discs with six-piston callipers and 365mm and four-pistons on the rear. Now the ceramics would have been an obvious option, but I have not heard one tuner give an enthusiastic response to Porsche’s factory upgrade that costs the same as a small car all on their own. They’re stupidly expensive, about as subtle as a punch in the mouth and simply not up to the job of fast driving. And if you crack one, you need a set of two to balance the car, and that brings a big bill.

TechArt’s steel brakes, on the other hand, offer a whole world of feel, never came close to fading on our test and will stop the car on a sixpence thanks to the epic combination of huge stopping power transmitted through the larger footprint offered by the 20inch wheels and tyres.

Then of course there is that wild interior, a Leonberg trademark. OK so if I was a serious buyer I might not have gone for the green in the first place, but had I done so then a co-ordinating RS-style interior would have been the only way to go. With swathes of Alcantara, perfect trim throughout the car and the kind of attention to detail that should have Porsche sending their own cars here for quality control it’s easy to see why the company has become famous for interiors and even those that head to other tuners for engine work want Thomas Behringer’s company to handle the cosmetics.

While the original GT Street was one of the fastest cars I have ever driven, it was simply too engine dominated to enjoy. The 997 variant is a whole new world for the Leonberg firm, though, as the rabid Rottweiler has become an everyday workhorse, that just happens to boot through 200mph whenever you’re in the mood.